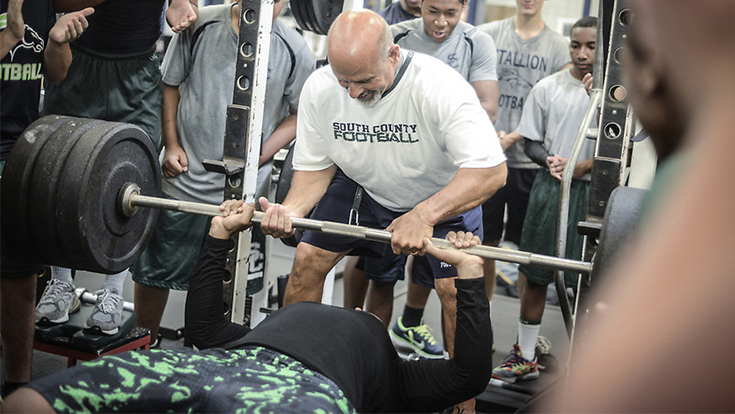 Sometimes you have to begin with extrinsic motivation to jump start a program. “Culture” is the big buzz word over the last several offseasons, even though it’s something coaches have focused on for a long time. Coaches are always on the hunt for the latest way to motivate players and get the individuals aligned and going in the same direction. For long term results, this is best accomplished by utilizing a system, and Brian Kight has done this in partnership with USA Football. The system for building leadership and culture can be found at usafootball.com/focus3.

In the short term, however, players who have not been a part of a winning culture might need a little more to bring them in the door, especially if that door is to the weight room. For players who have not had the background in lifting, the work can seem intimidating. As discussed on the Coach and Coordinator Podcast, an offseason awards program was implemented to bring those players in. Once they were there, the culture began to develop, players bonded with each other and coaches, and the individuals in the program began to align in the same direction.

Awards were created to give players ample opportunity for recognition and reward. Some were focused on weekly, short term accomplishments, and other focused on longer periods of time. The awards ranged from meal coupons or merchandise from local businesses, T-shirts, and helmet plaques made from helmets that were rejected in the reconditioning process and mounted on a finished wood base with an inscribed tag.

The results were significant and made the coaching staff and players proud. Here are the awards that were created:

The total of the four core lifts (bench, clean, squat, deadlift) added to make up one of the following clubs. Note technique must be perfect, without aid of a spotter, and in the presence of a coach for a max lift to count.

This award would go to the athlete who had the greatest improvement in his four core lifts. (helmet plaque award).

This award goes to the athlete who had the highest lift total of the four core lifts. (meal coupon).

This award goes to the top lifter when pound-for-pound is calculated for the four-lift total (meal coupon).

This award goes to the athlete with the highest max rep in each of the four core lifts. (meal coupon).

This award goes to any athlete attending all football sessions on time. (helmet plaque).

Beast of the Week

This award will go to the athlete who did not miss a day for the week and was giving great effort in the weight room or showed growth in his lifts and has outstanding attitude. (T-shirt).

This award is given to the player who at the end of each nine weeks has the highest GPA on the team (helmet plaque).

This award goes to any player who earns a 3.0 GPA or higher for a nine-week grading period. (T-shirt).

This award is given to any player that completes the nine-week grading period without any D or F grades. (meal coupon).

Greatest Improvement in the Classroom

This award is given out to the player who has the biggest jump in his overall GPA from the previous grading period. (helmet plaque).

Each position group GPA will be totaled and averaged. Team with the highest GPA for the quarter gets a wing party with the coaches.

This type of program can work in any situation. It starts with understanding the issues and having a plan to attack those. By providing the initial extrinsic motivation, players became used to working towards something — both in the long term and short term — and the small successes built upon each other and shifted the motivation to an intrinsic one.