Learning from the Buckeyes: Defeating man coverage with mesh 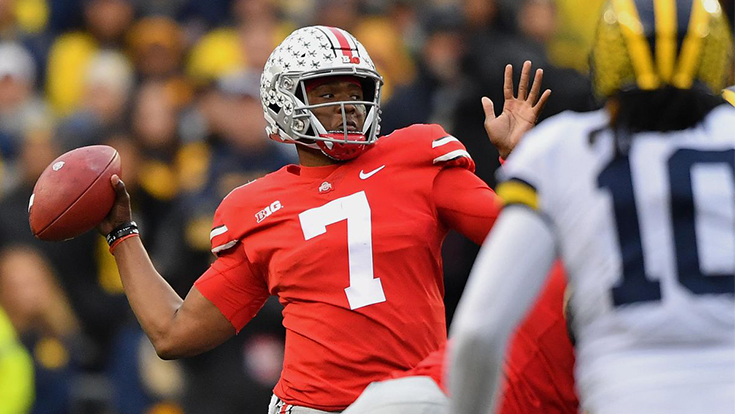 Ohio State versus Michigan this season was hyped up to be one of the games of the year in the Big Ten Conference. Ohio State, featuring a future NFL quarterback in an offense that can score on anyone, faced off against a Don Brown-led Michigan defense, who has put the clamps on their previous opponents all season. What resulted was a Buckeyes’ 62-point offensive explosion that left many wondering what happened to this vaunted Michigan defense.

Indiana exposed a potential crack in the Michigan defense in the previous game, throwing for 195 yards against the Wolverines, the second-most passing yards they allowed all season to that point. Ohio State elevated Indiana’s game plan and countered the staples of what Michigan is known for: man coverage, pressure and aggression.

The very first score from Ohio State came on what is known as a mesh concept. Mesh was a staple of the Air Raid offense in its early days and has been expanded to fit just about any offense and formation.

Ohio State comes out in a tight bunch look with the running back offset to the bunch formation. Ohio State knew that Michigan would play man and a bunch alignment provides a solution to beating man-to-man coverage.

Also, throughout the game, Ohio State caught Michigan in their defensive auto checks by aligning in different formations, which worked again to Ohio State's advantage. On this play, Michigan brings five-man pressure, leaving the middle of the field exposed.

Because there was no low-hole player, anything coming across the middle needed to be smothered by man coverage with no help or “cut” coming from the interior. On the mesh route, the Michigan defensive back ends up giving up inside leverage to the wide receiver, resulting in what is called a trail position.

The problem with being in a trail position is that with no inside help, Ohio State is simply throwing to space for a long catch and run that resulted in a touchdown. This was a great call playing against Michigan’s aggressive style. The mesh concept is very effective against man coverage, which Ohio State put on full display.

Later in the second quarter, Ohio State runs a similar concept but from a different look. Ohio State short motions into a stacked formation with the wide receivers stacked on top of one another. This is tough for defensive backs to cover as it puts another moving player directly in line with the receiver they are trying to cover.

Similar to the previous clip, the defensive back gives up a free inside release to the middle of the field. Michigan is playing Cover 1 (man-to-man with one deep safety), but they get caught in another five-man pressure where their low-hole player, who could’ve helped on the crossers, instead blitzes and leaves the middle of the field susceptible to crossers. The pressure never gets to the quarterback and another pass to a short crossing route is completed for a long run and catch.

In the second half, Michigan made the adjustment to leave a low-hole linebacker in the box and attempt to cut the crossers off. In what looked like a blown coverage by Michigan, Ohio State runs the running back on a wheel route out of the backfield attempting to pick the covering linebacker.

Michigan turns a wide receiver free across the middle and the low-hole linebacker allows the wide receiver to cross face, putting him now in a trail position.

RELATED CONTENT: 5 reasons why press man coverage can be effective for your defense

Ohio State's last touchdown was a result of great design. Because of the impact that the mesh route had on the defense throughout the game, the Michigan defensive backs had to be extra conscious of not giving up any more free inside releases on in-breaking routes.

On the snap, the Buckeyes' No. 3 wide receiver (furthest inside wide receiver to the strong side) faked a hard jab inside to gain outside leverage on the defensive back. Ohio State runs what is sometimes called a China route, which is a double in followed by a flag route (or a seven if you use a passing tree). Again, Ohio State was throwing to open space. The China concept is another great call versus man-to-man coverage because the defensive back covering the corner usually doesn’t get any help on out-breaking routes.

Overall, Ohio State called an offensive game that countered all of Michigan’s strengths (seen here in the previous article, “Hallmarks of the Michigan Wolverine defense”). Their use and execution of the simple mesh concept was exemplary and could be replicated by high school offenses. The routes aren’t difficult to learn, but the landmarks and timing of when the routes intersect has to be practiced and coached hard. The reward could be well worth the practice investment as evidenced by the Buckeyes’ offensive explosion against arguably the best man-to-man defense in college football.