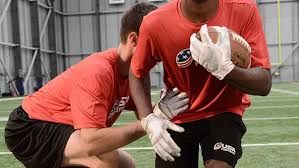 My introduction to Richie Gray took place via video chat in the early Summer of 2018. At this point, we’d worked as a group to tag a significant amount of film. The categories in my Hudl account looked very different. The team approach to tagging was both efficient and effective. Tagging in this manner got the job done and also forced my eyes to different things. I was beginning to look at things in “forensic detail”, a phrase I would later be introduced to by Richie.

One afternoon, Eastern Standard Time, the group of coaches that I’d been working with got together on a video conference. We’d welcomed each other into our homes over the past few weeks in this manner. Many of us were able to say goodnight to our children as they made appearances on screen during group film analysis. Meaningful work was being done and it was not coming at the cost of anyone’s time with family. It was a nice balance.

This conference would be different because Richie Gray would be included. We managed to find a window of time that worked for the group that now stretched the latitude of Scotland to Oregon.  Richie had spent time with the Miami Dolphins, so I was prepared for my role as an active listener. The amount of detail that the skill of tackling involves was made even more apparent to me. However, Richie had an outstanding way of creating metaphors and comparisons that made things relatively easy to digest and communicate. Like anything, the lingo needed to be learned. I was able to get much of this down in my work over the previous weeks. Once I had a basic handle on it, I found myself immersed in the tackle. After about an hour, I emerged from the conference inspired to apply what I had learned to my own program.

I started watching film as if with new eyes. I later commented to Andy that we didn’t dominate one tackle in the half that I’d watched immediately following the video conference with Richie. Not one tackle. Our culture was one that was fine with bringing the ball carrier down and perhaps the occasional big hit. Watching and noting what we weren’t doing was inspiration to learn more.

It was around this time, that I was made aware of a pilot Advanced Tackling clinic and drill video shoot that would be taking place over a three-day period in Philadelphia. The drive to Philly is about six hours from where I live, so I hit the road at about 4:30 on a Friday morning in July so that I could catch some of the drill shoot and the five-hour clinic that would follow the next day.

RELATED CONTENT: Learning of the Advanced Tackling System - Part One

When I arrived in Philadelphia, I joined Richie Gray, Andy Ryland, Terry Summerfield, and Vince DiGaetano. Fellow USA Football Master Trainer, Gabe Infante would be at the clinic as well. I was excited for what the clinic would hold. I was not expecting the amount that I would learn as the cameras rolled. As Andy described each drill for the camera and I sat off-set with Terry and Richie. This, for me, was the clinic within the clinic. In these conversations I was able to hear about the lifetime of experience that Richie had with contact. We talked about where each drill had come from and the problem that it was designed to solve.  We talked implementation, coaching points, and details. At one point, Andy said he was getting jealous seeing us whisper and act out drills or walk though techniques while he was on camera. By trade, Rugby is Richie’s game. He is not a football native. A non-football native working on the most important skill in the game with players at the highest level?

Richie’s experience has allowed him to focus solely on the skill of the tackle. He is not distracted by game management and scheme. He is a specialist. This became evident as he stressed the need to get to the forensic detail of the tackle. Richie’s reminders then that in order to make a positive and meaningful change, we must make the change important and we must also measure it still echo in my ears as we do this work.

The pilot clinic was great. The Five Fights were explained, and the strength of the program was revealed to the small group of coaches that were fortunate enough to attend. This was not another pre-packaged system that would give coaches just some ideas or a good start. This was comprehensive. Not only would coaches be able to work within a system that found the problems, but the system can help coaches find why those problems exist and it provides the potential fixes for those problems. Essentially, it’s like saying, “We missed the tackle. Here’s why. Here’s three drills that will help correct the issue.” In the past, our conversations went something like, “We missed a lot of tackles on Friday night. We’d better run a tackle circuit on Tuesday.”

We were about a month out from the start of the season. I knew we were young and that we were going to be in the process of growing as a team. I was also inspired. I felt comforted by the fact that I had knowledge of something that not a lot of coaches had. At least to that level of depth. I perceived this as an edge. I also knew that I only had two other varsity coaches, two JV coaches, a limited number of players, and no money in the budget at the time to order any of the bags that were available for purchase to accompany the Advanced Tackle System. That’s when we decided to get creative.