The Dark Side: How the Army Black Knights Successfully Bring Pressure With Fewer Defenders 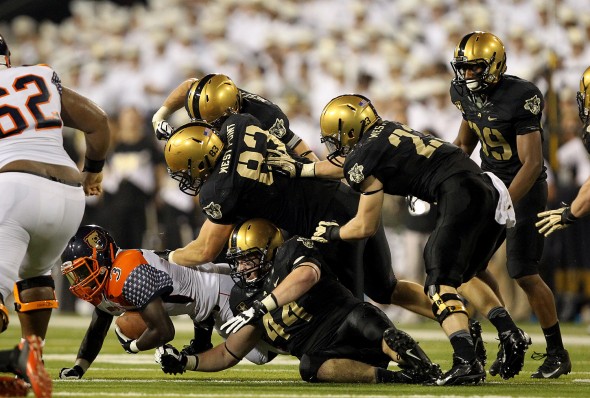 When people talk about Jeff Monken and the Army West Point football program, most instantly comment about how the Black Knights run one of the best option attacks in America. People talk about how they control the ball, rarely throwing, and when they play the bigger schools how much fits it gives the opposing defenses stopping this offense. What most don’t realize is just how good the Black Knights defense has been. In 2018, Army was eighth in total overall defense allowing 295.5 yards a game on average. They gave up the fourth fewest first downs and were just outside the top twenty in overall pass yards given up each game. Besides playing sound defense, the blitz game is where Army designs some exotic pressures to speed up the progressions of the teams they are playing. Army is not a blitz happy team, but when they do bring pressure, it lands home more often than not. Most interestingly is how many times they bring blitzes with only four players and still get home.

One thing Army does that helps them in their blitz game is what some in college football call a daylight blitz. The daylight blitz concept is a way in the 3-4 defense that allows you to get an add in rusher versus the pass game but still stay gap sound in the run game. Daylight blitzes tell your blitzer that if he reads run, he is to play his run responsibility, whatever that may be. If he reads pass though, he is going to be the add in fourth rusher and turn it into a blitz path to the quarterback. Army used this a few times against Kyler Murray and the Oklahoma Sooners after Murray had gashed the Black Knights on several long scramble runs. Army shows the pressure from their 3-4 with walking their outside linebacker up on the line of scrimmage. At the snap, as soon as the running back check releases and flares, the linebacker on the line blitz engages the running back and peels off into coverage. This allows the Army inside linebacker to daylight blitz. Often called a “tite” front, Army aligns their defense in a 4i-0-4i look, they are going to force the center to take the nose tackle. In doing this, the daylight blitzer is going to have his choice of where to blitz due to how Oklahoma is going to pick up the three down linemen. In this instance, the offensive line slides to their right, leaving big on big to the left. The daylight blitzer sees the center pick up the nose, and his add in is a free run through the A gap. This type of blitz has been very popular in the 2018 season as it is a safe way to add in a rusher in the pass game that has freedom to go wherever he sees fit. Being able to incorporate a daylight blitz into your base defense at any level would enhance your blitz game while also not selling out to get your add in rushers. 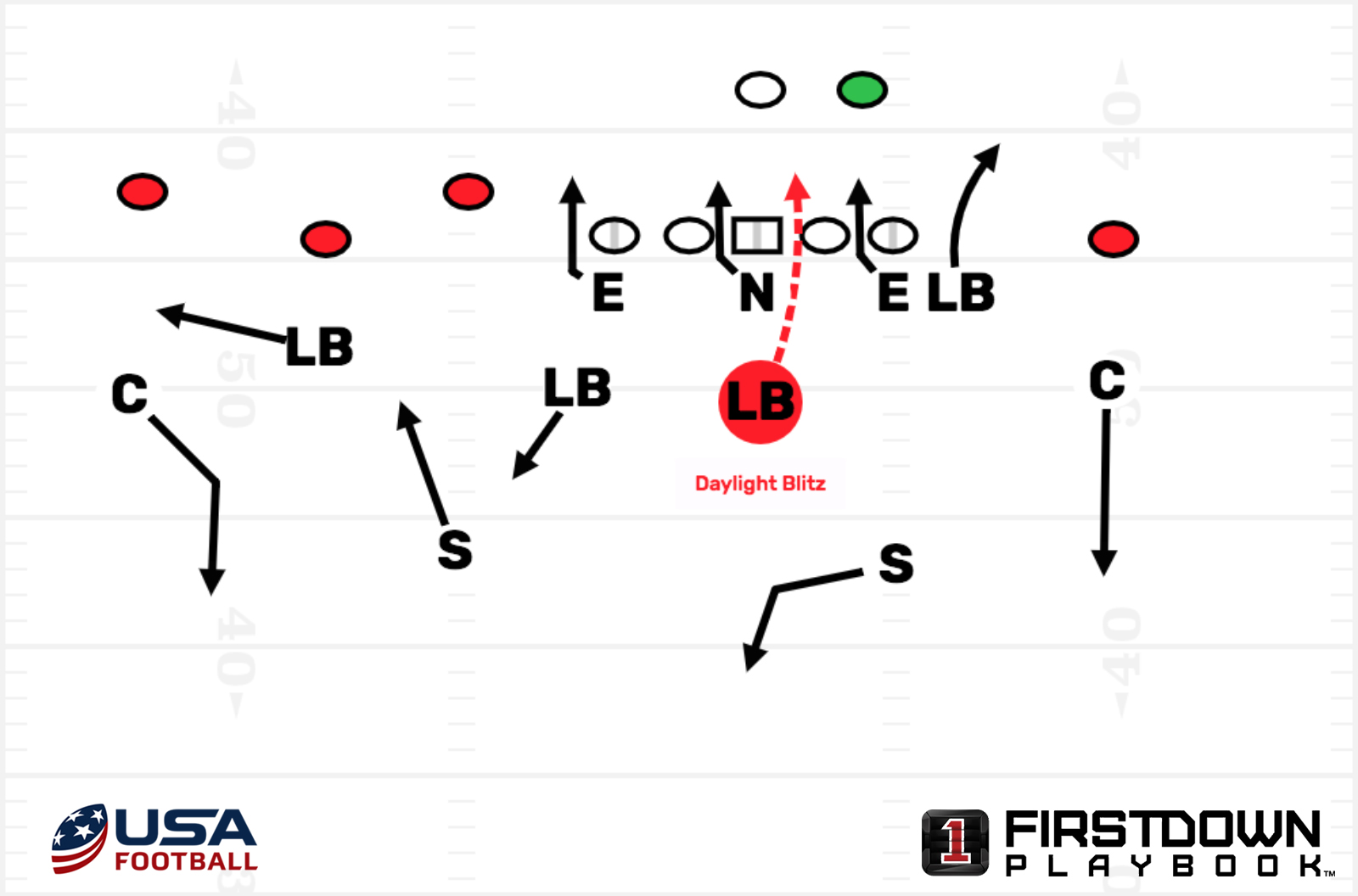 Jay Bateman, who is now the new co-defensive coordinator on the Mack Brown coached North Carolina Tar Heels, loved to get his Army teams pressuring quarterbacks by dictating offensive line protections and running the blitz behind the protection. In the bowl game versus Houston, the Cougars had a tough time figuring out how to pick up these overload blitzes that were constantly coming from the back side of the slide protection. Houston is going slide protection to their left with a chip H back lined up to the offensive right. On the snap of the football, Army gets into cover one, with the outside linebacker on the offensive right blitz engaging the running back and peeling on the flare. Army only brings pressure with four defensive players, but they run the blitz behind the protection. With the offense sliding left, both two techniques are going to slant with the protection, leaving the backside tackle having to pick up the first blitzing linebacker that shows. Army runs the first blitzer at the tackle and commits outside, leaving the newly formed B gap completely open and vulnerable. Army shoots the linebacker through the gap and the chase is on leading to another sack for the Black Knights. What army gets is four offensive linemen blocking two defensive linemen and a two for one on the backside while playing man coverage across the board. This is a great way to attack teams that run full slide protections if you can dictate the slide either way. 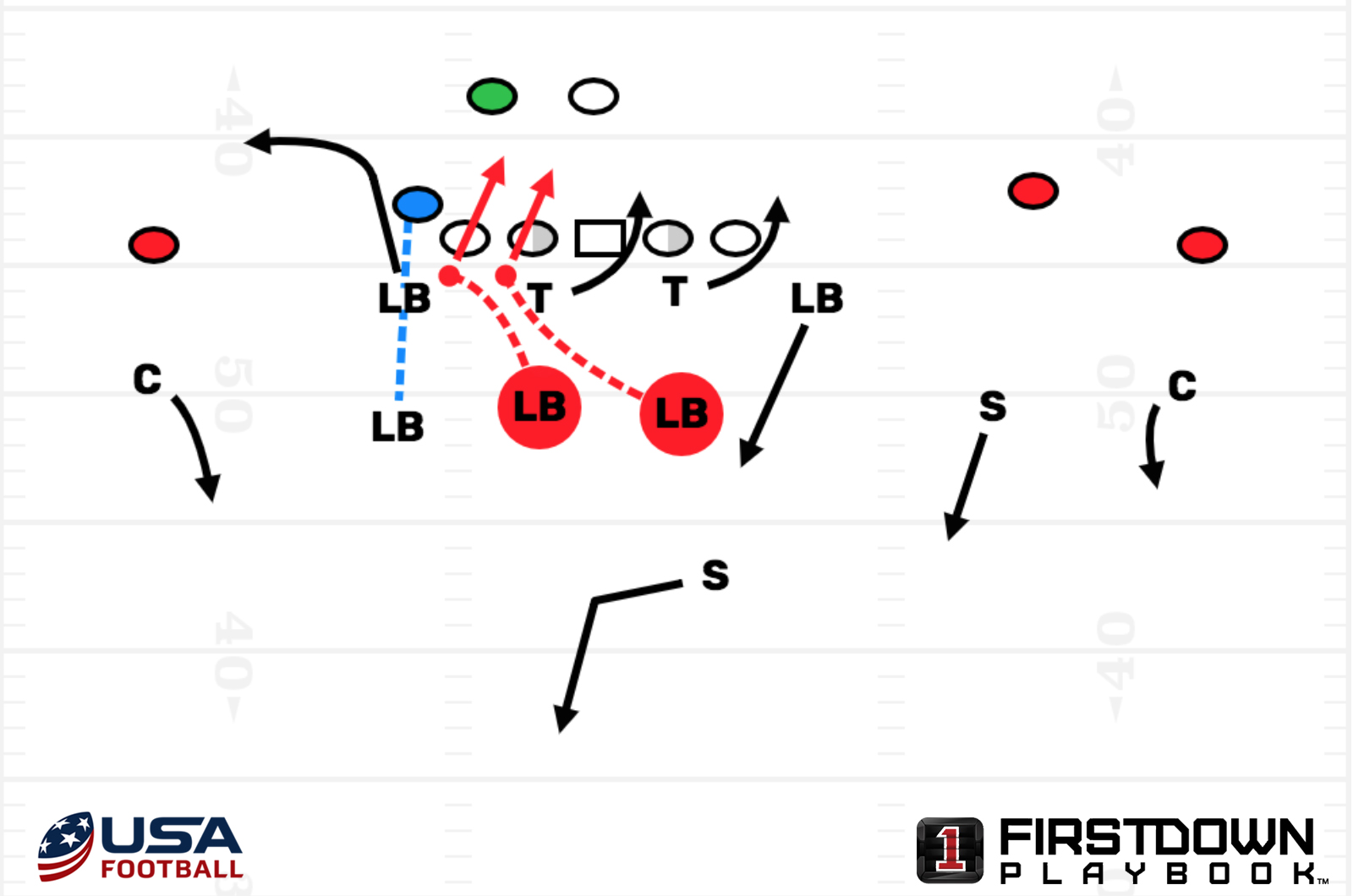 Another example of the overload blitz that Army likes to use is the double edge pressure that they’ll bring when teams are buried into one boundary or another. With a pressed corner tight into the boundary, bringing the pressure directly into the quarterbacks face is one way to disrupt the timing and accuracy of the player. The other advantage you gain from bringing the double edge pressure from the field is you can play the outside man and the number two wide receiver when split wide with one person. From one has to another, especially in the high school game, the throw is far more difficult than one into the boundary. There are few quarterbacks in all levels that can confidently throw the ball from one hash to the other on a line without fear of interception. Army catches Houston in a running back flare screen on their double edge blitz and the result is a huge loss.

RELATED CONTENT: Learn how to create explosive plays in the passing game like the Kansas City Chiefs

All in all Army in 2018 was an extremely sound defense who brought strategic blitzes that caused a lot of trouble for opposing quarterbacks. The takeaway that teams can use from studying Army is that blitz games don’t need to be sell out bring six pressures all the time. With proper film study and figuring out of tendencies, pressure packages can be schemed up so that you get max coverage and max pressure, which ultimately every defense in America wants.