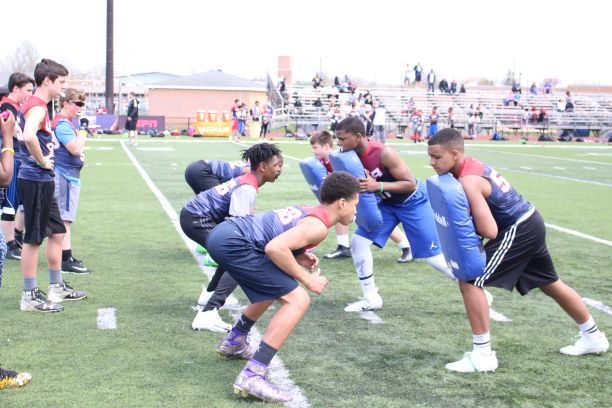 This is the first part of a three-part series ahead of the 2019 U.S. National Team Regionals. We'll hear about the National Team program directly from players, parents and coaches. For more information, visit www.usafootball.com/regionals.

My son has played tackle football for the last nine years, playing center for both his youth and middle school teams. He took an interest in the position from a very young age and he was inspired to be the best he could be anchoring the offensive line.

He can snap with the quarterback in any formation, but if there’s one thing that coaches have criticized over the years, it’s been his footwork. Whatever coaches tried with him didn’t seem to resonate.

That was until last year.

RELATED CONTENT: How to prepare your child for a championship game

He attended USA Football’s U.S. National Team Middle School Showcase last year at MetLife Stadium in New Jersey. Even though it was actually a tryout for the Middle School Bowl Series, I told him it was a clinic and that the full day of work would be good for him during the off-season. Apparently other parents took the same approach with their young athletes as well.

As I sat in MetLife Stadium, it was obvious that some of the drills had a lot to do with footwork and I noticed my son working diligently at them. At the end of the day, the coaches met with the players at midfield to give a rundown, but they also had one last chat with the position coaches they worked with during the showcase. Each player received an evaluation card and when the meetings were over, my son came over to me and showed me the card that was given to him by one of the coaches.

“Keep up the good work! Always keep your feet moving and you’ll be great” was written on the card.  I was glad that these coaches saw the same thing that his own coaches had seen for years. Perhaps during the showcase that day, something clicked in my son’s head and he felt he needed to take a step forward in his development as a football player.

RELATED CONTENT: How a youth football parent should handle tough situations: Part I

The following month, we received some exciting news as my son was selected to play in the U.S. National Team Middle School Bowl Series in Canton, Ohio. Our family was delighted and Bradley was pumped up to represent his country on the football field.

After each practice, Bradley would express how much he enjoyed the experiences being offered to him by the National Team coaches and by the end of the week, I could tell that everything they’d told him about his footwork was working. It’s the little things that you really have to pay attention to, but even I could tell that his footwork had improved a great deal from the start of the week.

Everything the coaches had talked to him about at the showcase, and in Canton, had worked because Bradley’s footwork has improved dramatically.  He was exploding off the ball this past season by pulling and racing downfield to block. The whole experience with the U.S. National Team was worth every penny, every mile we drove to the showcase and every second that Bradley spent with those coaches.

For however long Bradley plays football, he can thank those USA Football coaches for helping him take his game to the next level.