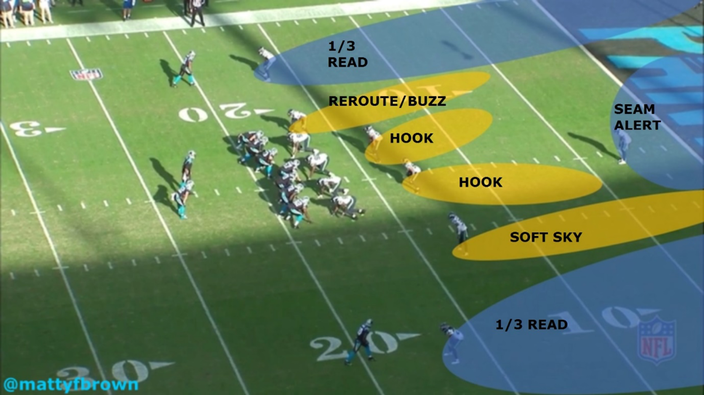 The NFL has improved to be far better at dissecting single-high defenses that were popularized by the successes of Pete Carroll. For that reason, and after the season-ending injury rangy free safety Earl Thomas suffered, the Seahawks head coach decided to call more match quarters.

Yet Carroll still wants to primarily run Middle of the Field Closed, especially out of his 4-3 base. From the dominance of the Legion of Boom to the present, Carroll’s pass defenses have never been vanilla Cover 3. Various checks and reads are built into the spot-dropping to make the coverages far more match-like.

Today we’ll be looking at “Soft Sky.” The coverage still allows Carroll’s teams to play with speed and free of the paralysis of thought, but it compensates for one inherent weakness of 3 deep, 4 under concepts. It also attacks the tendencies offenses lean on when faced with single-high looks.

It’s football 101 that the Cover 3 MOF safety is put in a terrible bind by two seam routes, leading to four verts being a successful call. Similar to how how Nick Saban uses Rip-Liz to match four verticals into a four-deep structure, Carroll has an answer to save his safety: “Soft Sky.”

He too uses the down safety to remove a second seam. After a pre-snap “zebra” call (a seam alert), a Soft Sky check can be called or it’ll be built in. It’s most often seen against 2x2 formations out of an over front, particularly versus an in-line tight end. 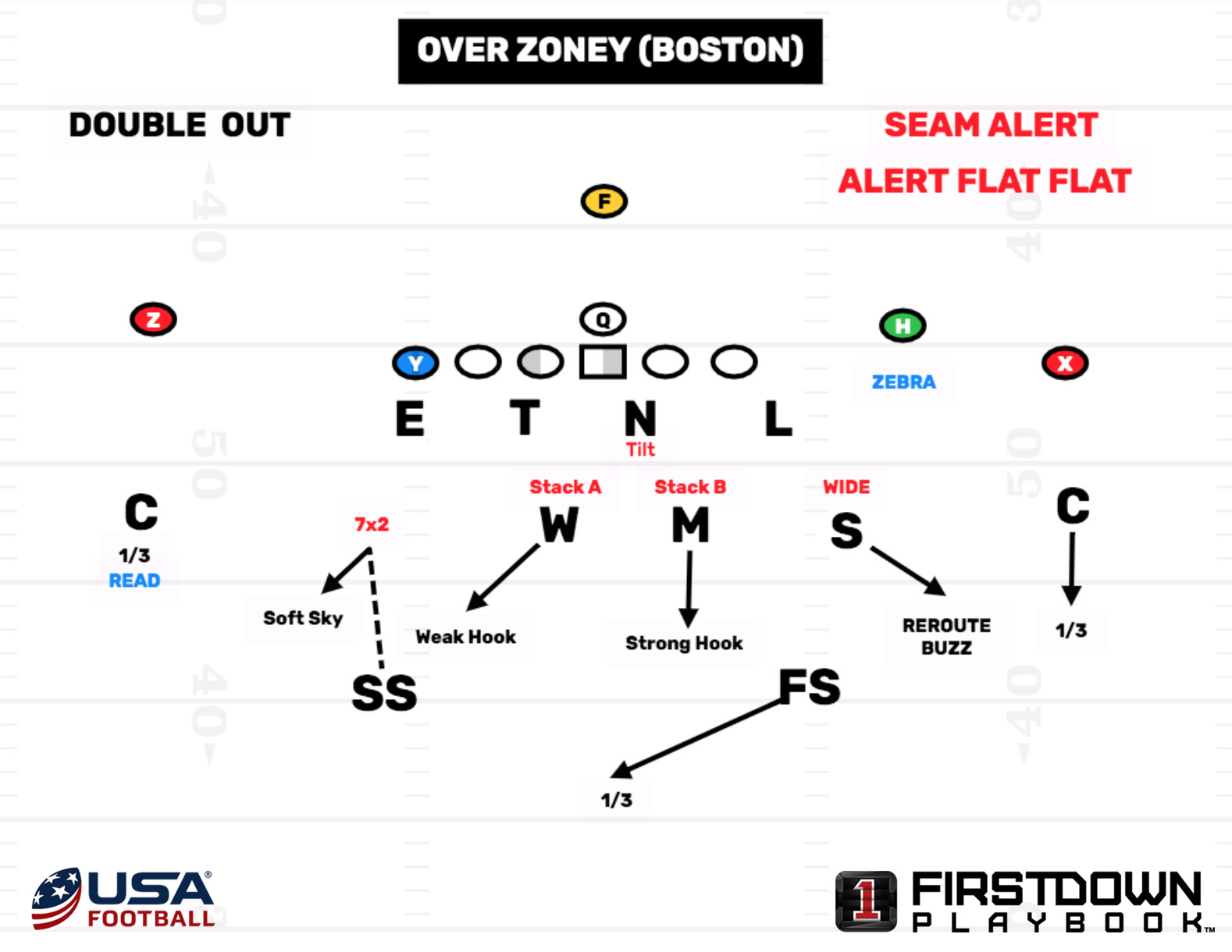 Then Bradley McDougald baited Cam Newton into throwing a pick that would prove a turning point. Carolina aligned with 12 personnel on 1st and 10, leading 13-10. Newton, thinking McDougald was a ‘hook curl; buzz to flat’ player, must have turned giddy when he saw deep safety, Tedric Thompson, cheat to the boundary. After McDougald was drawn up by the run fake to Christian McCaffrey, Newton chose what he thought was an open seam. 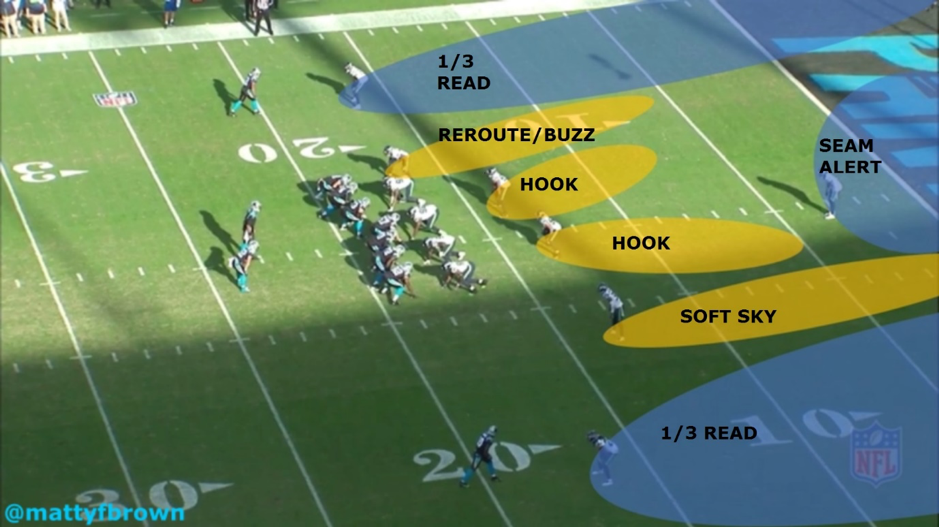 But the two Seahawks safeties were merely executing Soft Sky. Thompson shaded his middle third zone 60/40 over to the opposite side of down safety McDougald. Thompson’s task, following the seam alert, was to stay over his boundary seam and prevent any post.

Newton thought McDougald was going to stop in a hook. To the quarterback’s surprise, McDougald dropped with the seam into his Soft Sky and intercepted the ball intended for Chris Manhertz.

The weakness of the design is the lack of a buzz defender to the Soft Sky side. Seattle relies on strong rallying to the flat in such instances. After San Francisco and the inexperienced Nick Mullens struggled in week 13, Kyle Shanahan persistently manipulated Seattle’s Soft Sky coverage two weeks later in an overtime victory. 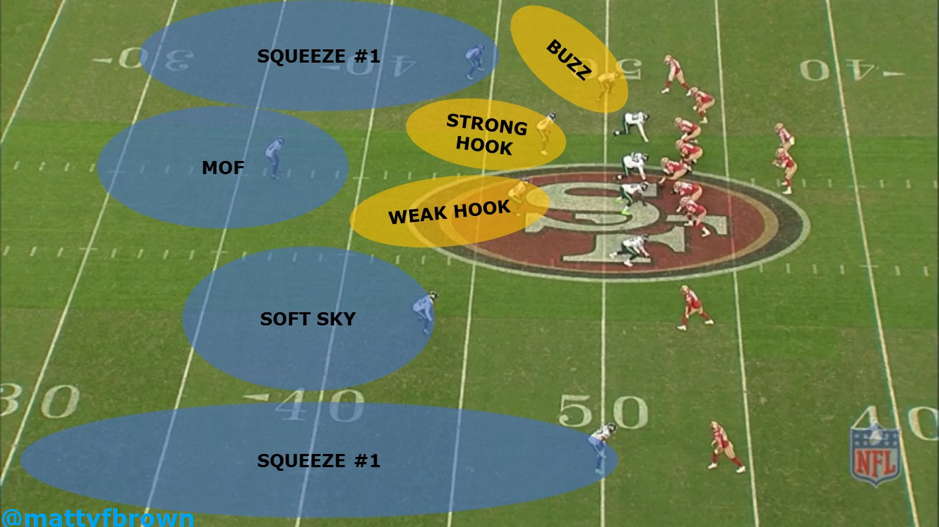 One play was a gorgeous inverted veer play-action. Coming out in 21 personnel to face base defense on 1st and 15, Shanahan gave Mullens a triangular read structure from a deep dig that occupied the MOF safety to a seam. Observing Delano Hill continue back with the seam in Soft Sky, Mullens knew his tertiary read in the flats was open. He attacked and found Matt Breida to pick up the first

Mullens has a nice wide play-fake, almost inverted-veer like, where he can keep his eyes downfield while riding the mesh point.

He can read from dig to seam to flat.

The flat is wide open, as the "soft sky" Delano Hill has run with the seam. pic.twitter.com/WN094pl1ZO

Applicable to any MOFC defense

The interchangeability at the peak of Thomas and Kam Chancellor is oft-overlooked. The Seahawks rotated the pair and checked into most coverages seamlessly. In the new era of their defensive backfield, when Seattle ran cover 3, Thompson was mainly relegated to a seam/post defender in more typical deep thirds. His athleticism and tackling weren’t trusted.

However, Soft Sky proved a nice changeup. If a two-seam pattern doesn’t transpire, then the offense is none the wiser as the down safety plays a regular hook. Yet, against common four verts designed to target Cover 3, it transforms into a quarters-like trap that gets offenses off schedule and tempts them into throwing a closed seam.

The coverage concept fits most defenses. Indeed, Carroll runs it via nickel and dime packages. For instance, it’s applicable to a 4-2-5’s three-safety system. If you want to talk about that, or anything else, my direct messages are always open @mattyfbrown.