How the Washington Redskins play their unique Cover-3 squat coverage 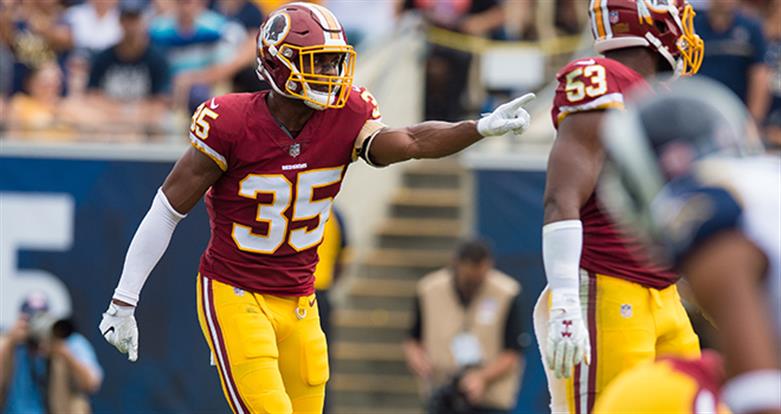 You don’t often see a really unique scheme in the NFL because there are only so many things you do on the field that haven’t been done before. Most of the creative schemes that we see come from the college ranks and make their way up to the NFL. The saying goes, “necessity is the mother of invention,” and not even NFL teams are free from necessity.

The Washington Redskins needed a change. They began the season playing a lot of man-to-man coverage and they were getting burned by it. After giving up more than 500 yards passing in the first two games of the season, defensive coordinator Greg Manusky knew he had to make a change.

Not only did the Redskins start playing more zone, they played a variation of cover-3 that I’ve never seen. The key to this defense is rookie Montae Nicholson (No. 35). Nicholson is a long, rangy defender that was nicked in the draft process for his lack of instincts and shoddy tackling ability.

He certainly wasn’t as skilled and versatile as the player he was replacing, Sua’ Cravens, who surprised everyone by suddenly retiring right before the season. He may not be able to come up on the run or cover tight ends man-to-man like Cravens, but he could cover ground. So Manusky created a scheme in which he could do just that.

The next elements to making this defense work are instinctual, physical corners. The Redskins have two of them in Josh Norman and Bashaud Breeland.

In the Redskins’ cover-3 squat (I made up this name), the corners actually squat in the intermediate part of the field and the free safety backs up and has to help on any deep routes like a safety in a cover-1 does. 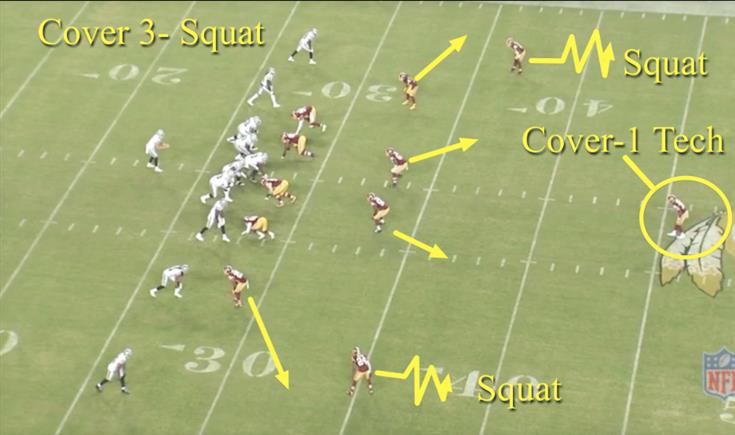 This is almost like a trap coverage. Offensive coordinators might see see the coverage and look to throw short and intermediate routes, thinking the corners will play soft, but if they aren’t careful, one of the corners could make a break to the ball and intercept a pass.

The “hank” concept is a common cover-3 beater. The shoot route from the No. 2 receiver usually holds the flat defender while the receiver is usually able to sit underneath of a soft corner. However, because the corners are squatting, the receivers on both sides can’t get open on the corner.

The quarterback doesn’t expect this, holds onto the ball and gets sacked.

Obviously, this defense is susceptible is if the receiver gives the cornerback a stutter to get past him. If the receivers on both sides of the field do this, then the free safety is left to defend the entire deep part of the field by himself.

This is where the speed of Nicholas comes in. If he doesn’t have the range to at least get close and contest passes, this defensive scheme doesn’t work.

On this play, receiver Michael Crabtree gives Breeland a stutter and Breeland bites hard on it, allowing Crabtree to fly past him. However, Carr gives Crabtree a pump fake to ensure that Breeland bites. This pump fake was all Nicholas needed to get a jump on the play. He uses his speed and range to lay a big hit on Crabtree, causing the ball to fall incomplete.

This type of coverage shouldn’t be used too frequently, though, because there is a big risk factor in playing it. If the quarterback is able to buy extra time or the free safety guesses wrong, the defense could be susceptible to a big play or touchdown.

Here, the No. 1 receiver actually runs a short “in” route, which causes rookie corner Fabian Moreau (No. 31) to squat while the No. 2 receiver runs a fade route from the slot position. The fade gets right past Moreau and he isn’t even in position to at least force the quarterback to throw the ball high.

It also doesn’t help that the quarterback was able to step up into the pocket and buy extra time. There simply is too much space for Nicholas to cover on the play, and it resulted in a big touchdown for the offense.

Again, this is a “trap” coverage for defensive coordinators to call when they want to gamble for a turnover, but if they call it too much, they run the risk of a big play. It is an interesting defense, though, and could very tough for offenses with instinctual corners like Norman freelancing with a fast safety over the top.