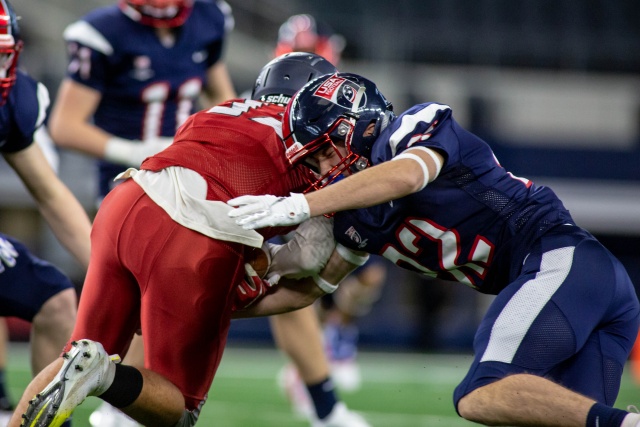 The second part of my tackling adventure over the past few months occurred in two different programs at two levels of football. After the initial excitement of my tackling eyes being opened, reality sets in on the task at hand and how much work needs to be done. What the Advanced Tackle System and the 5 Fights address is not complicated, but will force coaches to really look at what they do with a different view. Recently, I had a coach refer to taking the red pill in the The Matrix; everyone is not ready and once you take it, you cannot go back.

In the fall season of 2018, I was the defensive coordinator at Bridgewater College. The staff is on the cutting edge of instruction methods and the players are hardworking and excited to be coached. The culture has always been open minded, but getting to the next level of the ATS was going to push the staff and players willingness and trust of the process to the limit.

· FILM & CELEBRATE THE JOURNEY: The most difficult part of addressing the new way to look at a tackle is showing it done “right”. The 5 Fights compartmentalize the tackle to give coaches a detailed look into where a breakdown may occur, well beyond make or miss. The ATS videos demonstrate very well what each fight should look like, but finding game film to support perfectly (especially early on) was difficult. During training camp, we addressed this lack of “perfect” film by putting playlists of 5-8 plays from practice that highlighted a certain fight; both in drill work and team settings. Each meeting was started this way with the tackle tape, which reinforced the importance of tackling to the unit. This continued throughout the season and examples got easier to find.

· EMBRACE THE UNCOMFORTABLE: When you think about what a tackle actually is, the entire process is uncomfortable. Players are asked to stop someone who is only job is trying avoid you. To really get the most out of the 5 Fights and the ATS, the drill work needs to duplicate the uncomfortable nature of the tackle and players and staff needs to lean into it. We asked our players to reshape on a flat bag as it was getting pulled away from them with a stretch band, exaggerate running their feet while driving a pool noodle into the ground, and crawl on their knees to understand the leverage of the track. We were able to accomplish this because we understood what being uncomfortable was going to do for us as a tackling unit.

· EVERYDAY/EVERY PERIOD: The ATS approach to tackling needs to be the way of life for the defensive unit. The 5 Fights and the KPI coaching points should become standard practice in drill work and team periods. Circuits emphasizing a specific fight are powerful ways to reinforce the different pieces of the tackle during practice. During non-live team sessions, a level of connection should be declared. Even during 7 on 7, the players knew where they were supposed to tag off (including level 1), which challenged their laser focus and attention in a drill that traditionally lacks both in the tackling sense. The level of connection can differ between position groups. Creativity of the Finish Fight really shows in the non contact tag off periods (finishing with a bear crawl after the tag was my personal favorite). Anything that shows the players are understanding that the battle is not over after contact.

In 2019, I had the opportunity to join the Memphis Express in the Alliance of American Football League (R.I.P.). While the experience was short, it was an outstanding insight into how professional football coaches and players view the tackle. As you move up the levels in football, players foundation of what a “good” tackle is, can vary greatly. In addition, the defensive staff had some experienced defensive minds with an exceptional understanding of the tackle. The Advanced Tackle System fit us perfectly because it wasn’t trying to teach a new way to tackle, but a new way to view the tackle. We accelerated to the WALK stage in training camp after realizing some clear tackling issues in live contact joint practices. All the 5 Fight data showed the need for improvement across position groups, but it was the Yards After Contact (YAC) number that hit this seasoned staff and talented players like a ton of bricks. We moved beyond the make and miss number and united our tackling efforts behind indisputable data to make us a better unit.

In part three, we will RUN. The phase when everything in your tackling world starts to slow down.