The Tite Front: Why defenses are tightening down the interior of their defense 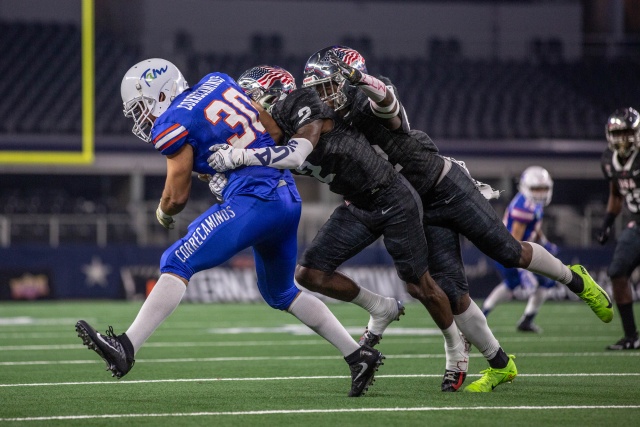 If you’ve been paying attention to football in general over the past few years, you’ve probably noticed a trend emerging on the offensive side of the football. More teams are opening up their offensive sets to give spread looks and space out defenses. The emergence of run pass option (RPOs) plays and the popularity of the term “Air Raid” have all been the hot topics as we move into the 2019 football season. Isaac Newton’s third law of motion says, “For every action there is an equal and opposite reaction.” Teams across America are now facing the challenge of defending the spread and still being sound on defense against the pass and run. One of the answers defenses have come up to combat this is moving to the “Tite” front and adjusting their team to a three-down linemen package to get more speed guys on the field to defend offenses. Here are what I believe to be the top three reasons teams are going to the Tite front.

The Tite front effectively shuts down your interior run game with the minimum number of defenders possible. The Tite front as a base involves two 4i- or 4-alignment defensive linemen and the nose set as a zero directly head up over the center. With the emergence of the spread offense across all levels, offenses are attempting to attack you horizontally and vertically while also hitting where you are not defensively. Out of the Tite front, you can control B-gap to B-gap with three defensive linemen and one inside backer, basically leaving a free hitting linebacker that can track, stack and fall back on any inside run. Stack, track and fall back refers to the linebacker’s ability to track the path of the running back, and if he cuts back, the linebacker “falls back” to play the cut back because in the Tite front he is not responsible for an interior gap versus the run game. In essence, teams are attempting to eliminate the inside portion of offenses by any means necessary, but they are also doing so by not having to devote max resources and defenders into the middle of the defense. An example of this is LSU playing a Tite front versus Florida this past season. They are attempting to run a zone concept run play versus LSU’s Tite front. What happens is the backside defensive end crosses the offensive tackle’s face and controls the cutback B-gap leaving the running back with nowhere else to go because LSU is defensively gapped out.

Using the Tite front allows you to play with, at minimum, six speed defenders to help cover the areas of the field. In the Tite front, because you are gapped out along the interior gaps, you can bring your speed guys onto the field to play the perimeter run game and pass game. This gives you the advantage of having your larger players being able to play the box while your speed guys get to handle the edge. For teams like the LSU Tigers, the Tite front allows them to play with hybrid outside linebacker/defensive end types of players. These individuals can play in space but also can play down in the box when teams bring the H-back or tight end onto the field. The flexibility this allows defenses is they do not need to sub packages onto the field to adjust to formations they are being presented. Throughout the season LSU faced a variety of teams that presented various challenges in the spread offense, but the presence of the Tite front helped shut down more than a few offenses.

RELATED CONTENT: Setting the Nose in the Tite Front

The Tite front allows your inside linebackers to play without being an “in conflict” player. In the modern-day offense, regardless of the level of play, you are going to be faced with offenses that want to run some sort of run pass option. The toughest part about playing an even front is that eventually you are going to run into a point where a linebacker either needs to exit the core and go out and play in space, or they are going to be a run-gap defender and a pass dropper at the same time. Offenses have evolved to the point that quarterbacks are reading defenders to see their next move. If they don’t step up, the quarterback hands the ball off. If they leave their designated pass drop, the quarterback throws the hot route right behind them. What the Tite front does is allows your defenders to not in be in conflict when they are in the core of the formation. Because you are gapped out with four defenders on the interior, your fifth player is a free hitter and your sixth man in coverage has edge run responsibilities but can play the pass first by alignment.

All in all, the game of football continuously evolves. Offenses change, defenses adapt and offenses come back with another answer of their own. The cycle goes on and on and doesn’t seem as if it will slow down in the future. At the end of the day, defensive coaches need to continually be creative with how they slow down the high-powered offenses of America.