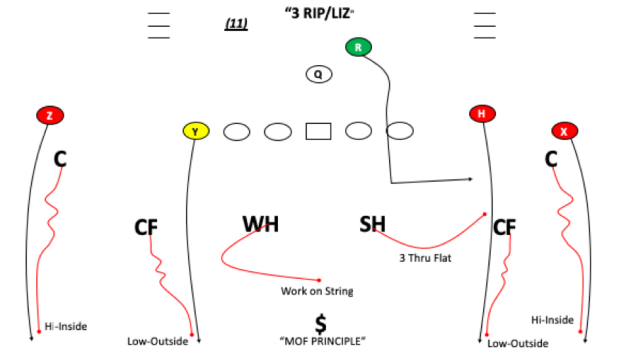 In 1994 when Nick Saban and Bill Belichick were with the NFL’s Cleveland Browns, they led Cleveland to its last playoff victory. However, following three losses in one Season to the Pittsburgh Steelers, they understood that they had to change. The Browns based out of a MOFC Cover 3. The issue this presented was that dropping into their zones, they could not properly defend 4 vertical “Go” routes; the two inside seam routes horizontally stretched the center-field safety. The problem Belichick and Saban had was they needed to be able to keep overhangs on both sides of the formation, eight defenders in the box, and still be able to defend 4 eligible receivers going vertically. As Saban famously said “when Marino is throwing it, that old break-on-the-ball stuff don’t work”. Once they realized that they couldn’t play Cover 1 and compete man-to-man they had to come up with something: the creation of “Rip/Liz Cover 3". Rip/Liz is a Cover 3 match concept when defending offenses 2x2 formations (11 or 10 Personnel)

Before we start, Players must understand what the Divider is, and how they relate to it and its rules. What is the divider? Cogan described it as an invisible line that goes all the way down the field. This divider tells Corners and overhangs whether they have the MOF safety’s help. When the receiver is inside of the divider, he has Safety help; if the receiver is outside the divider, he has no safety help. The divider is different based upon where the ball is placed pre-snap; opposite hash, in the middle of the field, or near hash. The rule is 5/1/Bottom. These numbers are compared in relation to the numbers on the field.

Ball is on Opposite hash: The divider lies 5 yards inside of the top of the Numbers. 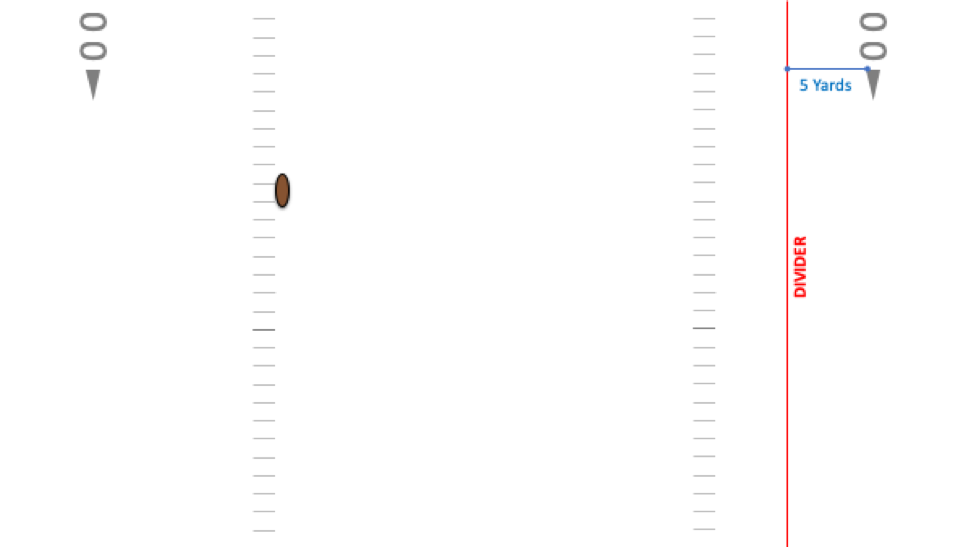 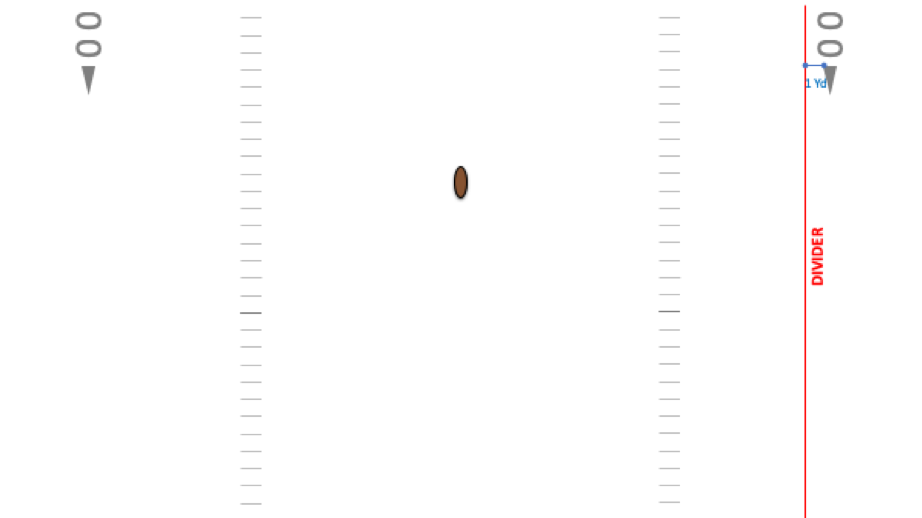 Ball is on Near Hash: The Divider lies on the bottom of the numbers 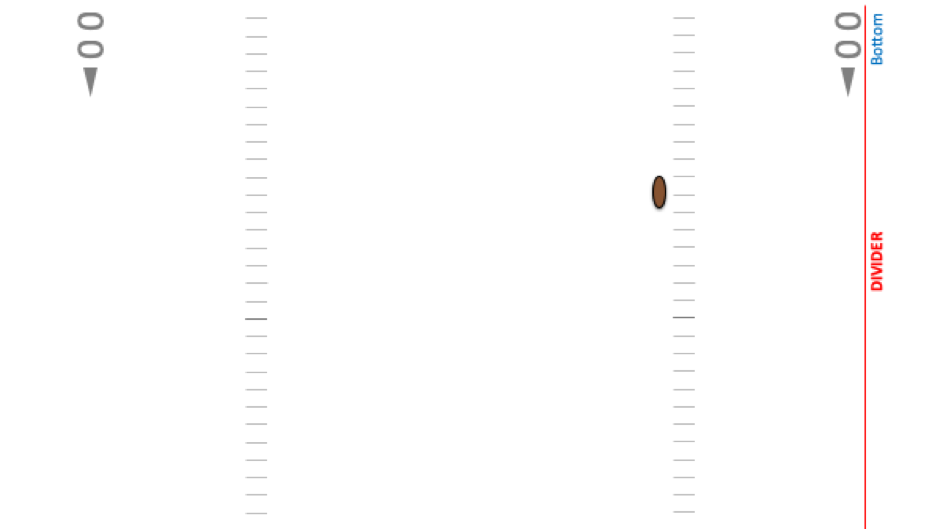 Corners
Corners start in press, and bail on the snap using a sideways shuffle, with chin on the shoulder looking at #1. Corner will play MOD. MOD means Man on Deep. They count steps of their drop to declare vertical, and the corner will match him with his divider rules if he declares vertical. If the receiver Runs under or a hitch, he will make the appropriate “Under” or “Smash” call. This communicates to the Overhang what type of route #1 is running, because he cannot vision it himself. When a “smash” or “under” call is made, the corner will vision #2 while keeping his position maintenance (outside-trail).

Overhangs (Star/Outside Backer/Free Safety)
Overhangs(Curl/Flat Player) play with the 2 main rules: the first rule being "2 in the Seam" - meaning if 2 is in the seam, overhangs will match and take him (unless he gets a “smash” or “under” call). Overhangs use a “Scootch” Technique; starting square to the receiver and shuffle backwards on the snap within their divider rules. Scootch technique is used to declare "2 in the Seam". After 3 scootch steps, if #2 is still vertical he is considered in the seam. If #2 is not in the seam, overhangs will play cover 3. Eyes of the Overhang will read the end man on the line of scrimmage(EMLOS) to near back, they have to be able to vision #3 on their second rule - “Fast 3”. "Fast 3" is when #3 goes directly to the flats after the hike, such as an arrow or swing. Conversely, if the back is “In the down”, the Overhang will shuffle and vision #2 for "2 in Seam". If the Overhang gets a “smash” call, he will leave #2 and “Hunt 1”. Hunt 1 means to find up-field hip of #1 to force him to cut back into the defense if he were to miss the tackle. “Under” is different than “smash”, which tells the Overhang that #1 is coming towards him and he does not have to flip and “hunt”. He will come off #2 and open up to squeeze the "Under" to the Hook defenders. if "3 is in down", and #2 goes out, Overhang will open up to the curl area, holding that until #2 out leverages us. (This will help leverage the wheel as well.) “Sail” technique is used when the Overhang gets a “fast 3” and a vertical/out by #2. Overhang will keep his zone turn and fight out for width on the out, not depth. "Sail" looks similar to a Cover 2 corner, with his back to the sideline. Once the "Fast 3" has out leveraged the overhang, he will flip his hips and rally to the flat route.

Inside backers (hook)
Their rule is Hook, and “Final 3 Through”. If “3 in down” (See above) #3 will be matched by the inside backers(hook). Any check-releases where #3 will release to one of the flats, the hook players will carry him thru to the flat, or "Final 3 Through". This is because he cannot guarantee an overhang will have the flat, since the Curl/Flat player may match #2 vertically. The other hook dropper will drop and melt to the middle; The two inside backers will play “on a string” with each other. When given a "Fast 3", The strong hook defender will "flood" the coverage into the direction of the "Fast 3". The Strong Hook defender will expand into the Curl area, relating to the final #2 by pushing to the low and inside Hip of #2. The Weak Hook (opposite the fast 3) will use what is called a "bingo" drop: opening up towards the "weak hook" area to defend the early in-routes by visioning #2 weak. If #2 does anything other than break inwards, the Weak Hook player will push back into the Strong Hook, replacing the backer to the "Flood".

The middle of the field Safety will align at 14 yards in the direct middle of the field. Upon the snap, he backpedals to 20 yards; "melting" or angle-pedaling to where the passer looks first, then breaking on the 2nd direction the passer looks. This is referred to as "MOF Principle". When stemming from a 2-high safety structure, the "MOF Principle" player will run at a 45-degree angle into the Middle of Field and square up. The MOF safety should not move far from the midpoint, doing so will fracture the "Divider" rules. 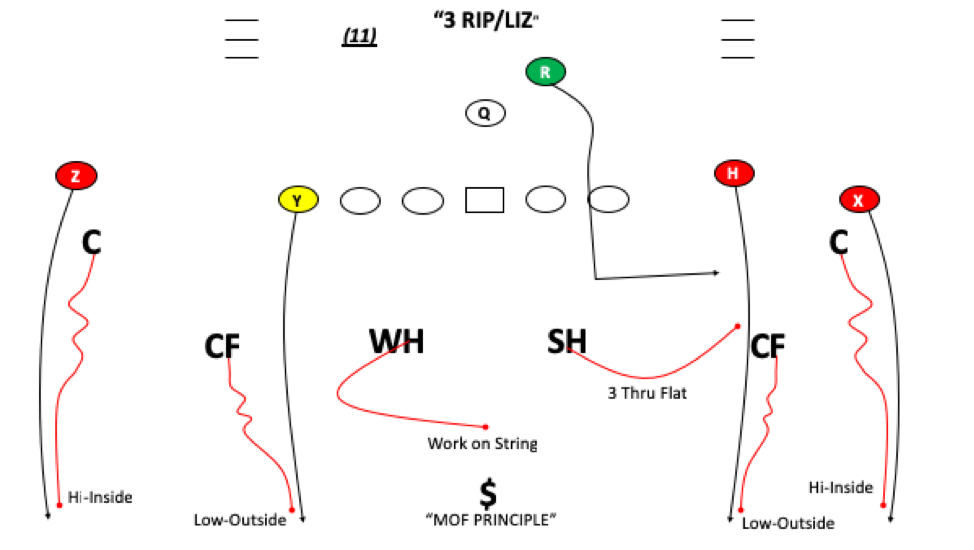 Vs NCAA
Hook droppers are the key to creating a 3rd level when the Offense tries to stretch you with three levels such as a “Levels” concept. When the Hook player gets an “under” call he will “Robot” or roll over and run to the middle of the field looking for the "Dig.” When he finds the "Dig" he will match the route bottom-up. The opposite hook defender will drop to his Zone matching the final 3. 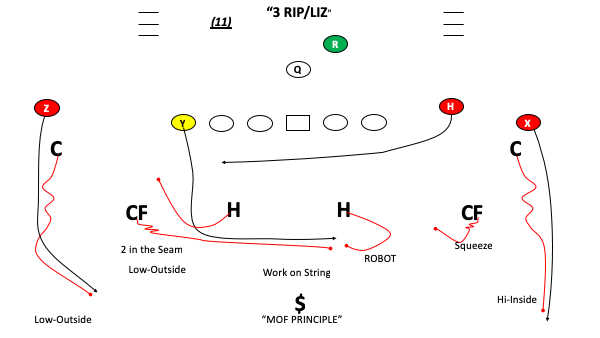 Vs Mesh
Double under, CF will squeeze back to hook and take the double drags from the opposite side. Both hook players will robot with the “under” call. There is not a route for them to match, but they will both end back into the hook. 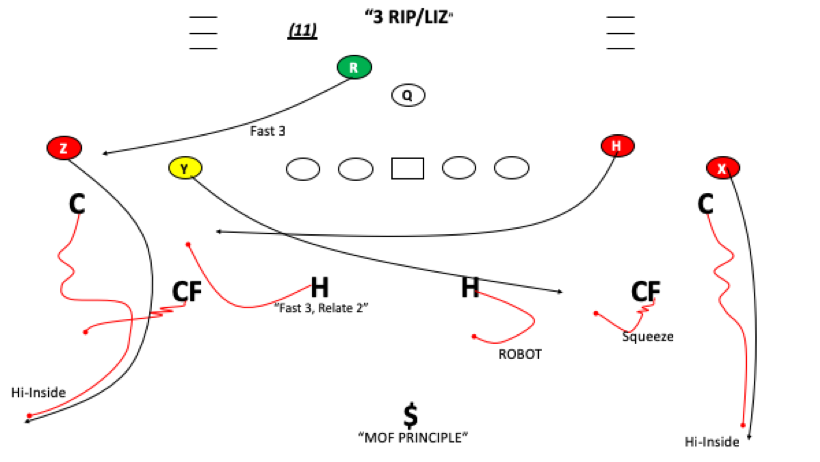 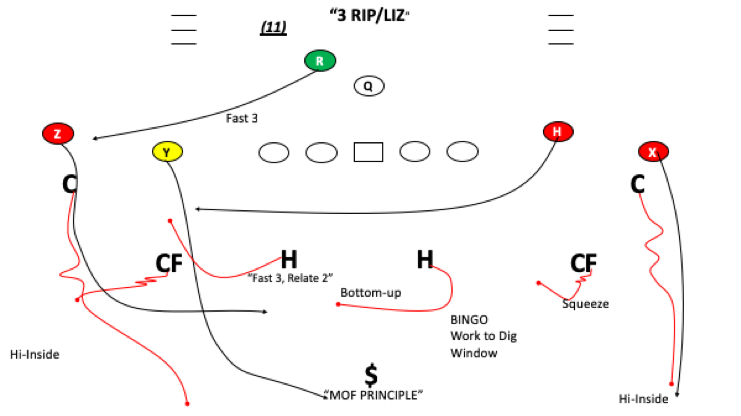 How Will Offenses Attack Rip/Liz?

Cogan detailed that Rip/Liz (and cover 3 in its entirety) pedagogy should be filled with daily match distributions against NCAA and "fast 3" flood, because defenses have to be able to create 3 levels of defense to match the offense.

Coach Cogan wants to play Rip/Liz to maintain the defense has box numbers no matter the offensive formation. Rip/Liz helps to leverage receivers with the MOFC principles, relieving your overhangs and Hook players pass stress. It is a great scheme when you have corners that can handle 1-on-1 without being beat over the top.