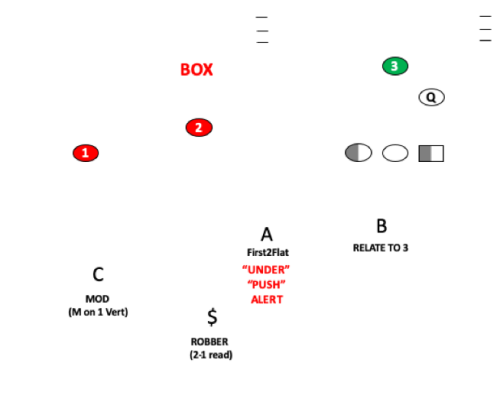 Man coverage is exactly as it sounds. Each defender has a designated man across the entire field. Vision is on the man the defender is covering, typically in his hip pocket.

Example – The Corner has the most outside receiver no matter where he goes (“cat” coverage as it is known).

The field is separated into areas, where each player has designated area to defend. He will do this while visioning and breaking on the QB.

Example- I have the curl/flat zone. I drop to where the landmark for curl/flat is. When the QB “pulls the pin” on the throw, I break on the ball.

Like zone, the defenders are dropping to an area while visioning the QB top-down, however, if a player enters the defender’s zone, he will take him man-to-man. Zone match is played by rallying to throws short of zones. Defenders have a “no cover zone” in the flats where they will not take a player man-to-man until the ball is thrown.

Example- Will LB dropping to his hook zone and No. 3 runs up through it. The Will now man’s up No. 3.

Example – Corner has No. 1 man vertically. If No. 1 does anything else, I will man up a different player. 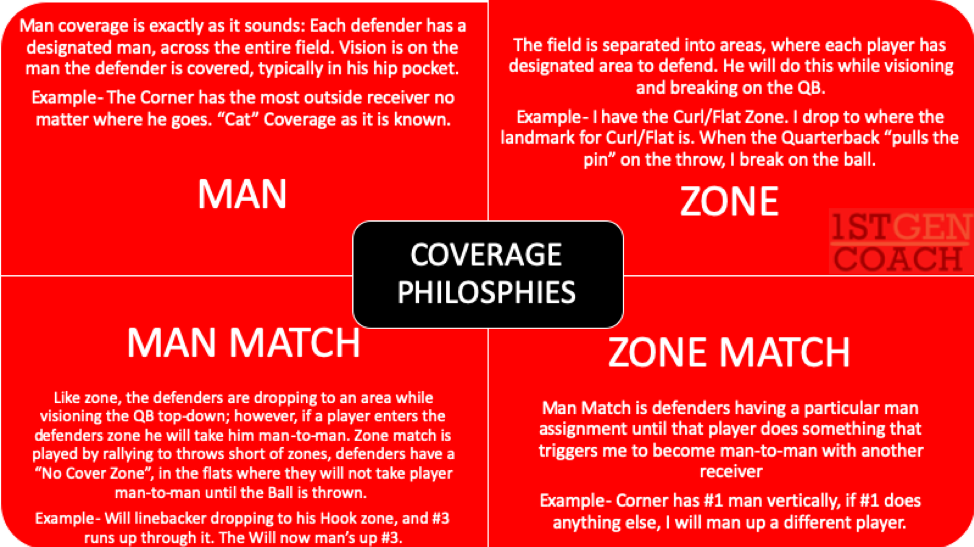 What are the Differences in Zone Match and Man Match?

There are a few distinctions between the two, even though at times one can look like the other. To understand, ask a few questions:

If they are dropping to an area before running to man a receiver, then it’s a Zone Match principle.

If so, this means they are using a zone match concept.

Defenders are in the hip pocket of receivers in Man Matches, while they cover with a top-down approach in Zone Matches.

Cover 7 is part of the Man-Match Quarters coverage family. It is a two-high split field coverage concept where defenders distribute routes tightly, running with receivers, even across the field in their hip pocket.

Cover 7 allows defenses to have tight coverage on intermediate and vertical routes by bracketing slot receivers and squeezing the “lanes” in the coverage. This Man Match version of Quarters is best used in situations when allowing players to catch short throws and rallying to them won’t work because they are too skilled and can outrun your defenders if given the head start.

Often, the spacing of modern spread offensive sets force defenses out of zone coverages. However, playing straight man-to-man is not always a viable option when evaluating player talent against the opponent. Man-Match Quarters give the defense the leverage and coverage options to defend offenses.

What is Cover 7 vulnerable to?

Tight splits where the offense uses many shallow crosses and meshers. Better off using Zone Match schemes against those teams and rally on short throws.

Underneath WR, have No. 2 or No. 3 man-to-man if he goes up or in. If he goes out, they will man No. 1 with a particular technique.

I will push my man by one receiver over. This is mainly used by the backer when No. 3 pushes into the flat, where the Apex will push to the old No. 3 and the backer will push and play man-to-man against the new No. 3.

First WR to flat will be manned by the Apex. The “F2F” player is expecting to man No. 2 until he gets a “Push” call. If No. 2 goes in/out and there is no fast No. 3, he will take two back across field.

The back in the backfield runs directly into the flat area and out of the box at the snap of the ball.

As mentioned, Cover 7 is a split-field cover concept that is flank dependent. This means that they will make the coverage call depending on how many receivers there are to that particular side. 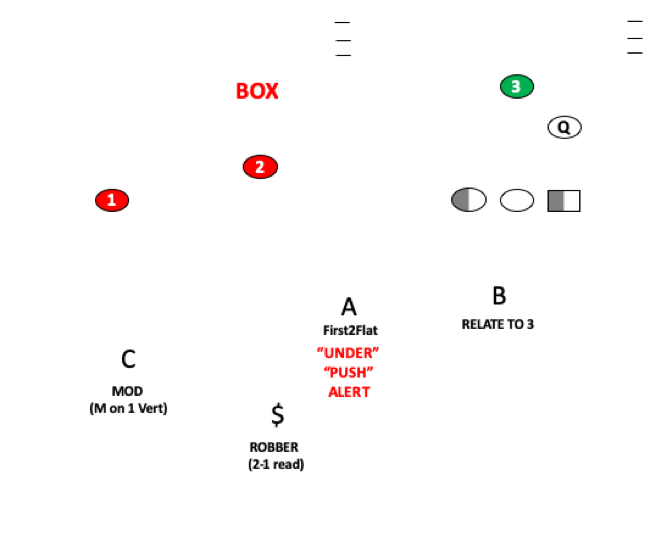 “BOX” is the first call installed within Cover 7, working as a base in that way. BOX is the first coverage call because the concepts built in box are like training wheels; most of the carryover in teaching methodologies starts with BOX.

Inside leverage, playing off man on deep (MOD) on No. 1. If No. 1 goes inside immediately, he will make an “Under” call to the Overhang and will zone off into his quarter. Corners will count steps to determine the Under call. By default, three steps by the corner and no move into the shallow, he will man up the route. This allows the corner’s footwork to control the tempo of routes, instead of yards of the receivers, which allows the receiver to dictate coverage. Counting corner steps instead of receiver yardage also cuts out any gray area of coverage calls by the corner.

Inside leverage using robber technique (2-1 read) If No. 2 is up, man No. 3 with inside on-top leverage. If No. 2 is in/out, “rob” No 1. “Robbing” means to snap your hips and eyes to the receiver, undercutting slant/dig/post.

Apex between the EMLOS and No. 2. If No. 2 is attached to the core of the formation, he will align 3x5 outside. He is the “first to flat” player. If he gets an “Under” call, he will play No. 1 man-to-man. 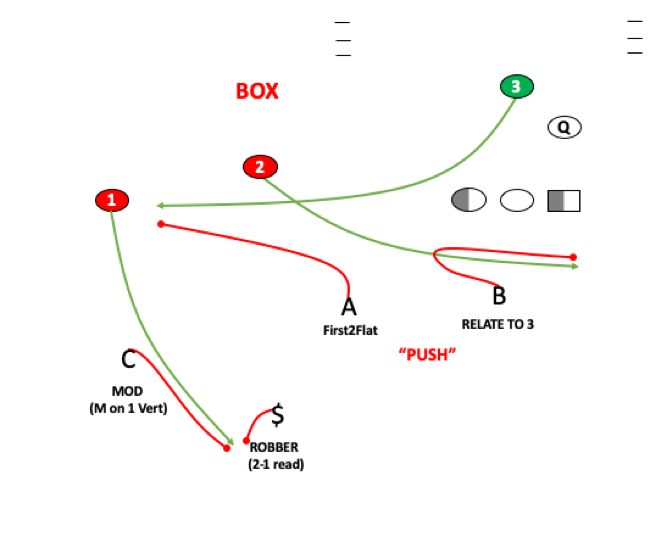 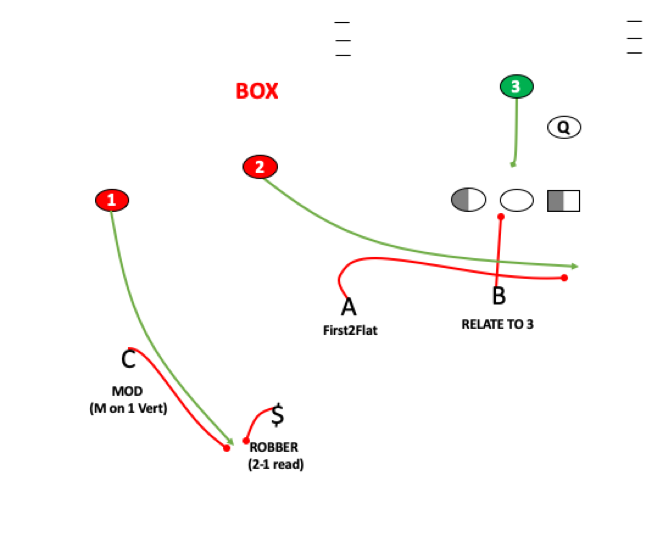 MOD is the identical coverage to BOX except the corner will align presses to No. 1. The corner will use what is called a “bail man” technique, still making “Under” calls. The only differing technique is by the corner, making it an easy carryover for the defense. 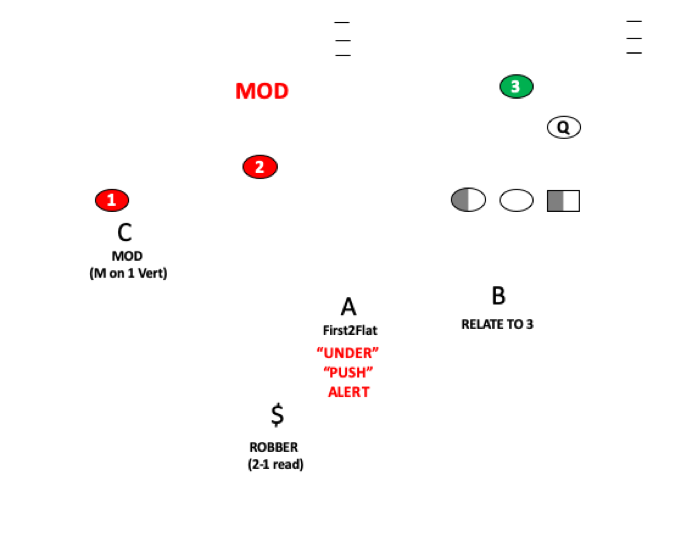 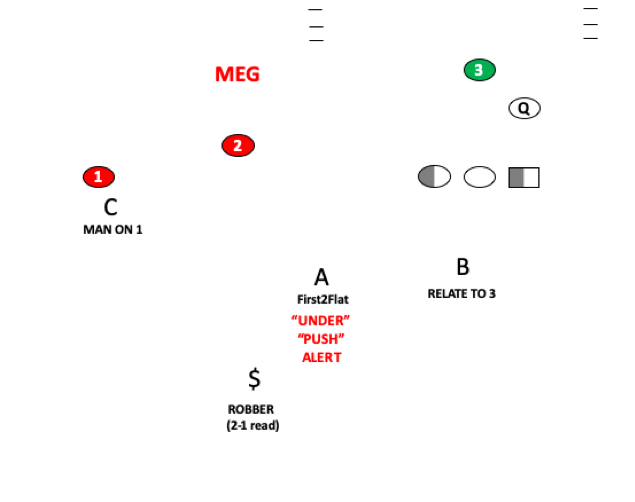 CONE is a bracket coverage, and even though it is mainly used on the one-receiver (weakside) sets, understanding and installing it creates carryover into other coverage calls.

If No. 1 runs a “sneak” or cross to the field, the safety will rob and man No. 1. The corner will bail off and use MOD rules. If No. 1 does anything else (outside release), the corner will man No. 1.

The Backer to the CONE call will man the back. If the backer stays in to block, that backer will add himself to the pressure pattern, hugging the LOS. Adding the backer creates the illusion of pressure within all coverage families. But the largest benefit to adding into pressure is that it creates one-on-one for all other rushers. Now, the defensive line knows that if they beat their guy, the back cannot chip or help.

Coach Bartee breaks SWITCH down into two coverages, one when in the open field and the other when in the red zone, known as “Red 7 Switch.” SWITCH is a specific coverage call, used when No. 2 is on the ball (when a lot of switch routes occur) while bracketing the dangerous inside receiver.

The corner will press align, like in MOD. His rules are to play man-to-man on No. 1 unless No. 1 goes behind No. 2, which will then prompt him to switch and man No. 2. An example would be vertical switch routes by the two receivers.

He will align 5 yards off and anywhere from shaded on to 2 yards inside No. 2, playing man-to-man on No. 2. He is allowed to “let the receiver win the race” because he is an inside-bottom trail defender on No 2. Will “builds a fence”” to the inside of No. 2.

Will use same exact Robber technique as other coverages, aligning outside instead. He has No. 2 up with outside trail. This is where the crossover with CONE occurs: looking 1-2, if No. 1 has an inside release, the safety will play the first break he sees (i.e., No. 1 on a post), but if No. 1 goes outside, he will treat it like CONE on No. 2.

An adjustment made at the college (Saban) level is for the Mike to make a “Push” call to the Apex defender, then take over his responsibilities for the Apex (inside trail man coverage on No. 2, where the safety is bracketing outside). 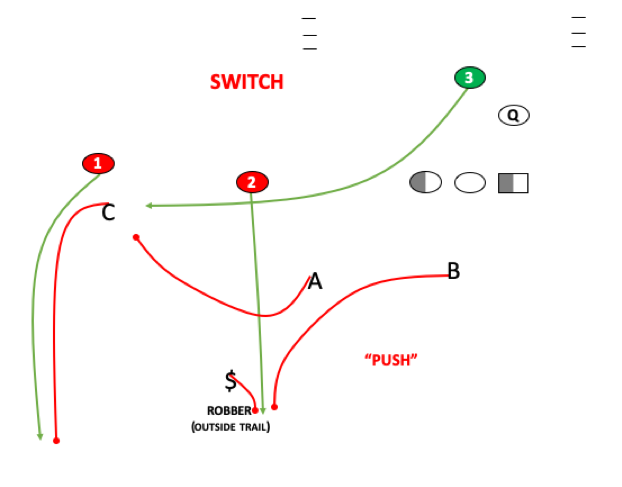 The corner is slow bailing to help define the release of No. 1. He has the same rules as SWITCH 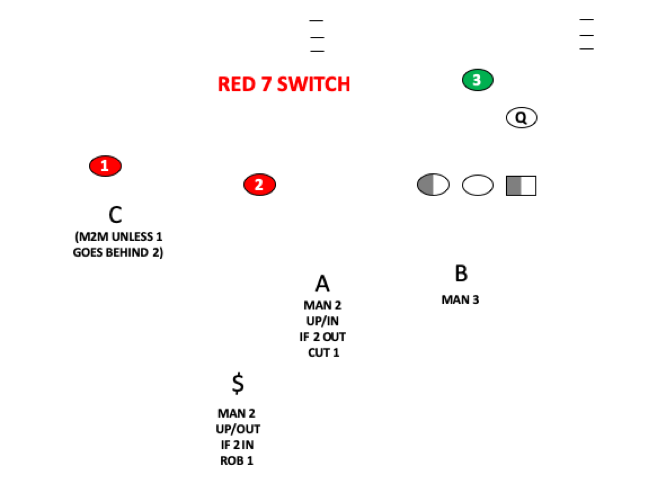