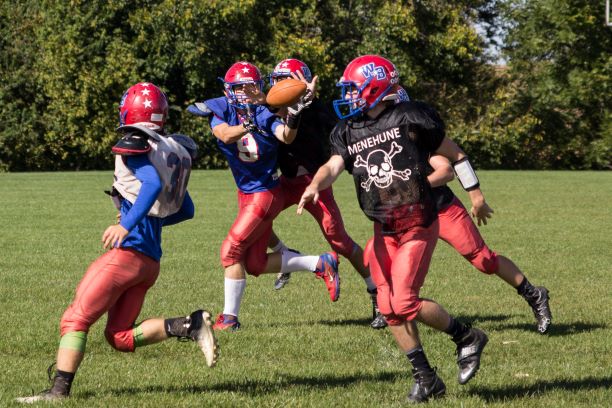 Thursday was scrimmage day at the USA Football Middle School Bowl Series in Canton, Ohio.  All six teams went through their fourth practice on Thursday morning as they continued preparations for Saturday’s trio of games at Tom Benson Hall of Fame Stadium.  After a break for lunch and some time with family, the athletes returned to Walsh University for scrimmages which will mirror Saturday’s game schedule.

The weather wreaked havoc with the scrimmage schedule when a pair of rain and lightning delays pushed back the scrimmages.  Despite the delays, all the teams were able to get on the turf field in full game uniforms to get a sneak peek at their opponents for Saturday’s contests.

Before the scrimmages, the players received a pleasant surprise. They were issued specialized USA Football gloves to be able to use in the remaining practices and the games! This serves as another reason why the Middle School Bowl Series is a great experience for the players and coaches.  It is also an opportunity for parents to soak in all the action and get the chance to meet other parents from around the country.

Youth football has its share of differences in various parts of the country when it comes to rules and competition. Some parents my wife and I have met were surprised that our son played football for his middle school. This came as a shocker because there are states that don’t offer that opportunity, forcing kids to play for the local town program.

On Friday, the teams will go through their final practices and meetings for the week as they wrap up preparations for Saturday’s game.  Here is Saturday’s schedule…

*Game times are subject to change

All three games on Saturday will be streamed live on the U.S. National Team Facebook page.