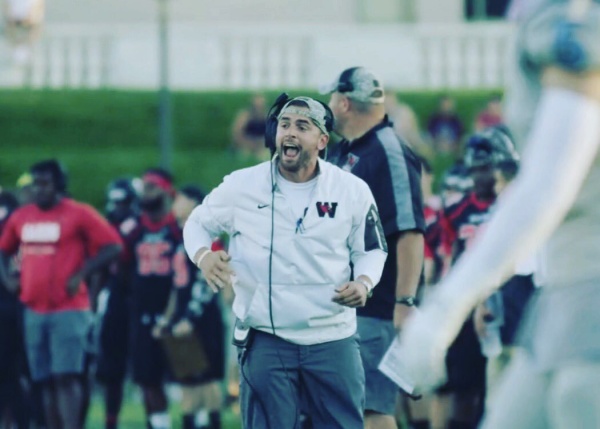 Having put together several articles detailing nearly every facet of the receiver position for USA Football, it’s safe to say Drew Lieberman knows how to coach wideouts.

Joining the Coach and Coordinator podcast, the current wide receivers coach at Don Bosco Prep (N.J.) detailed how to save your receivers’ legs during the season. Being one of, if not the position that runs the most on the football field during practice and game day, Lieberman provides some much-needed advice to keep your wideouts fresh and ready to go throughout the season while also getting in quality reps.

Before addressing what he does on the field with his receivers, Lieberman goes in a different, but just as important direction. “I’m a big believer in the saying, ‘There’s no such thing as overtraining, there’s only under-recovering.’ I’m big on that. So that’s where it starts for us,” starts the founder and CEO of Sideline Hustle. “In preparing our bodies for the season, we squat once a week, we lift three times a week … and we stretch every single day after practice, and I make them take ice baths every single day after practice. That builds the foundation for me to push them pretty much as hard as I need to push them and their legs hold up fine.”

Individual periods are a key piece as well. “From there, you’ve got to be smart about how many routes you ask them to run,” says Lieberman. “So, my [individual] periods, when I feel like we need to get better at a route we won’t run the entire route. We’ll just run the top of the route. I have a bunch of different drills for each break point whether it’s a curl and a comeback, or a dig, or a speedout or a slant. Whatever it is, I’ll have drills just to work on that separation breakpoint but not making them run the full route down the field. So that will save their legs quite a bit.”

Lastly, ball drills are huge for Lieberman and his group of receivers. “I think that you can really never catch too many footballs,” begins the former college coach. “In the preseason during special teams period when I have some free time them, we’ll run routes, we’ll do full-speed releases, we’ll be pretty heavy on our legs. Now, when we get that free time, we just do ball drills. With ball drills, [we’re] just trying to create uncomfortable environments for them to catch the ball in so we never just play catch.”

Making his receivers be as attentive as possible is key to success for Lieberman. “One that I love is the lying-down ball drill where the kid is just lying on his back and you’ve got either a teammate or me kind of walking around in a circle and just throwing the ball at him from different angles while he’s on his back,” adds Lieberman. “It’s an uncomfortable environment to catch the ball from, which then translates to making the tough catches in the game.”