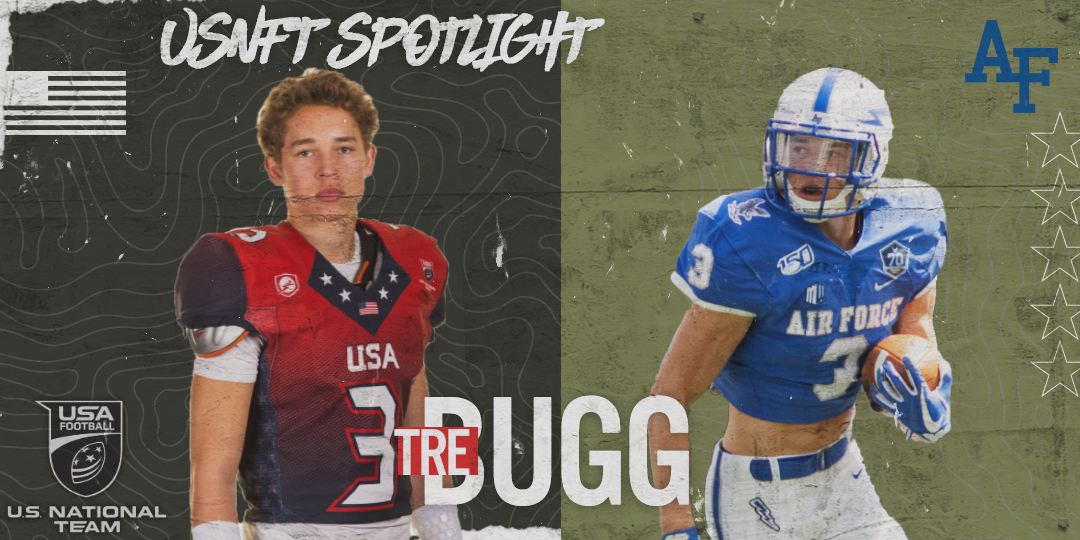 Throughout the years, the U.S. National Team has prepared and produced some impact players within college and professional football. Air Force Academy defensive back Milton “Tre” Bugg III is one of many Team USA alumni making a difference in college football.

Bugg, a graduate of Williams Field (Ariz.) High School, anchored a stingy defense in the 2017 North American Championship at the ESPN Wide World of Sports Complex in Orlando, Fla. Bugg and the U.S. limited Team Canada to one touchdown, winning 33-11.

Bugg continues to shutdown receivers in the college ranks at Air Force Academy. In 2018, he became a regular in the secondary for the Falcons, playing in all 12 games and amassing 20 tackles and two pass break-ups. Bugg took an even bigger stride in 2019 collecting 49 tackles, seven pass break-ups and three interceptions. Bugg has shown potential for electric plays, like this 92-yard pick-six against Hawaii last season.

Reminiscing on his time within the U.S. National Team program, Bugg shares how instrumental the experiences were in setting himself up for success at the next level.

“When I was selected to play on the U-19 team in Orlando, I was on the field with a lot of four- and five-star athletes that already had offers to Alabama, Ohio State, Oregon, Miami; you name it,” he said. I came into that game as a three-star guy, but I was able to successfully compete with all of the four- and five-star guys. That was huge for my confidence as I continued to mentally prepare to play NCAA Division I football at the United States Air Force Academy.