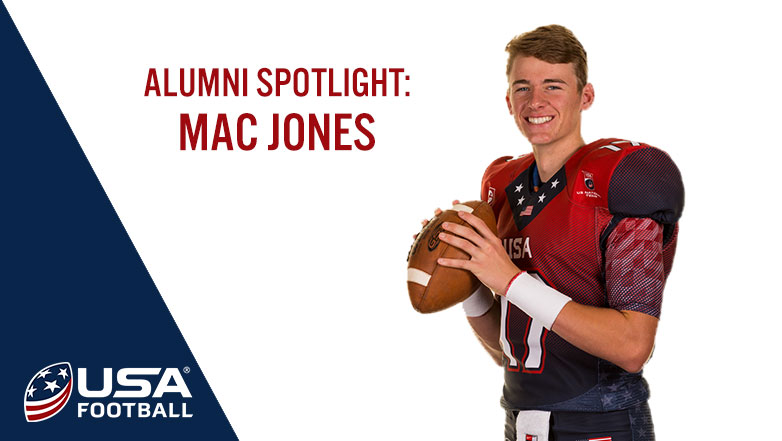 Mac Jones is one of many exciting young quarterbacks taking over the NFL. As the 15th overall pick in the 2021 draft by the New England Patriots, the Jacksonville, Fla. native is the face of the 21st century’s most successful football franchise. However, before leading the Patriots to the playoffs as a rookie or winning a National Championship in college, Jones was a high school senior and a star quarterback for USA Football’s U.S. National Team program.

“I wasn’t invited to the big all-star games for college recruits, but the U.S. Tackle National Team gave me a chance to represent the USA,” Jones said as he reflected on the opportunity. “There were a lot of great recruits on our team. We had guys like Jonathan Taylor, D'Andre Swift, and Chase Young. I thought, ‘This is awesome. Let’s get together and give it a shot right before college.’ I remember I had two long runs in the game, and I scored on one. That experience was a jumpstart for college, and it set me off on the right foot.”

Despite his status as one of the sport’s best passers, Jones didn’t always play football growing up. He built a diverse athletic profile as a young athlete.

“I always played plenty of sports. I began with soccer, and then I started playing flag football,” Jones said. “I fell in love with the game and the sensation of being on the field, making plays. I loved the idea of football because of the team aspect. I played tennis and came from a tennis family, which is more of an individual sport, but I wanted to be a part of a team. There was a lot of football around me when I was growing up in Florida, and I fell in love with the game early.”

Jones looks back and sees value in his initial days as both a flag and tackle football player, which each contributed unique experiences to his development process.

“I was probably six or seven when I started playing tackle, but I played both flag and tackle year-round,” said Jones. “I was a running back at first because I was fast, and finally they switched me to quarterback because I was smart. They found the right fit. I thought flag helped me learn to run around and make plays as a quarterback, and tackle football was all about being a leader and getting the ball to the guys around me.”

Jones went on to play high school football at The Bolles School in Jacksonville, Fla. for legendary head coach Corky Rogers. He committed to the Alabama Crimson Tide as part of the 2017 recruiting class. As a redshirt freshman, Jones sat behind fellow eventual NFL starters Jalen Hurts and Tua Tagovailoa.

Despite a redshirt season and sitting behind two of the most gifted quarterbacks in the country, Jones remained focused on preparing for his opportunity to play. The 23-year-old has made a career out of being patient and focusing only on what he can control. It’s a mentality he learned from his head coaches, one that has helped him remain focused on the big picture.

“I think everybody has their doubts about the future. My big thing was focusing on ‘the now,’ whether that’s in pop warner, high school, college, or the NFL,” Jones said. “I knew I wanted to play for as long as I could, but at the end of the day, football comes to an end. You have to treat every day as its own day and try not to focus too much on the ‘what-ifs.’ I’ve had some really good coaches who have instilled that in me, and the message has been the same. You can only control your attitude, effort, and be where your feet are. That’s been the consistent message that I always live by based on what my coaches told me.”

Jones’ patience and preparation paid off. He saw his first significant playing time under head coach Nick Saban when Tagovailoa battled injuries in 2019 before becoming Alabama’s full-time starter during the 2020 season. That year, Jones passed for 4,500 yards, 41 touchdowns, and four interceptions on his way to earning Consensus All-America honors and collecting the Davey O'Brien and Manning awards, given to the nation’s most outstanding quarterback.

Jones finished his only collegiate season as a full-time starter with a perfect 13-0 record, capping the year with a 52-24 win against Ohio State in the College Football Playoff National Championship Game. He threw for 464 yards and five touchdowns in the win.

This past NFL season, Jones led all rookie quarterbacks in passing yards and touchdowns, but Jones hasn’t let success cloud his approach to the game, as evidenced by his advice to young football players.

“It’s important to realize that football is a game that you enjoy and love. The reason you play is to have fun,” Jones said. “You should never shy away from having fun while playing football or any sports. You have to enjoy it, love it, and realize it’s just a game. It’s great to bring people together over football. There’s also the personal challenge of becoming a better player and a better person. For the young people out there, work hard, trust your coaches and families, and that’s all you can ask for.”

Build a foundation, better your skills and become your best self through USA Football’s High Performance program.

Men and women can showcase their skills at flag and tackle U.S. National Team Pathway events all over the country, whether they’re competing, training, or both.