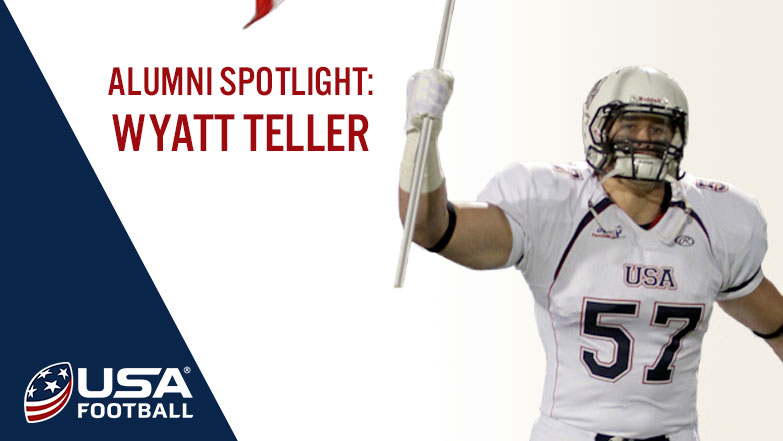 Football teams win and lose games in the trenches. Cleveland Browns All-Pro guard Wyatt Teller has embodied this philosophy since his time as a defensive lineman at Liberty High School in Bealeton, Va. During his final days as a defensive player, Teller brought his passion and prowess to USA Football’s U.S. National Team program.

“Traveling for the International Bowl was one of my first times leaving my state,” Teller said. “The only time I went to Texas prior to that was for the U.S. Army All-American Bowl in San Antonio. In the International Bowl, we played in a big, beautiful high school stadium. Everything really is bigger in Texas. I carried the U.S. flag out when we were introduced, which was awesome. I had a big tackle or two during the game. It was an amazing experience.”

While his National Team teammates remained on the defensive side of the ball throughout their days in college and into the NFL, Teller moved to the offensive line during his redshirt freshman season at Virginia Tech. The move came with its challenges.

“I’ve been absolutely blessed, but there are always times where you doubt yourself,” Teller said. “I remember in college, transitioning from defense to playing along the offensive line made me think, ‘This might not be for me. This isn’t going to be fun.’ I learned to love new things about the game, like pancake blocks. You have to focus on those things. There were times in college when I wondered if I was good enough. Most of the time, I tried to focus on the weight room and improving in that area.”

After five seasons in college, the Buffalo Bills called Teller’s name in the fifth round of the 2018 NFL Draft. The Cleveland Browns traded for Teller one year into his professional career, a move that created more uncertainty for the guard.

“There were even times in the NFL where I was unsure about my future,” Teller said. “After my first year, I got traded to the Cleveland Browns. I was walking into a great opportunity with a terrific fanbase in Cleveland, but I was just traded. I didn’t know if I trusted myself or if I was good enough. You have to push through adversity, focus on what you can bring to the table, and think about what you’re going to do to keep improving.”

The trade created some doubt, but keeping a man with as much spirit as Teller down is impossible. By his second season in Cleveland, the Manassas, Va. native was a Second-Team All-Pro and widely recognized as a top player at his position.

Teller is eager to share his story with young athletes who encounter uncertainty in their own athletic endeavors.

“There’s a lot of adversity in sports, and your situation can always change. I was a defensive lineman at All-Star games and All-American games in high school. I went to college and transitioned to the offensive line within two months,” Teller said. “I had to decide whether it was just a move to help the team or something I was going to embrace and take to the next level. Sometimes people are too quick to quit if they’re not having success, and that’s the opposite of the work you need to put in to be great. You have to find what helps you work. Not everything happens how you plan it, but you have to take everything with a grain of salt and work your butt off.”

Teller began playing football in his youth because it was a positive way to burn off excess energy. The sport became his career and a teacher preparing him for the day he hangs up his helmet for the last time.

“Football is very important. It teaches you how to be a good brother, friend, and teammate. Even if you play a very long career in the NFL, most of your life comes after football. You have so much time after football when you want to be a good citizen, father, or son to your parents. Football teaches you that there are no days off and that you need to make the right decisions if you want to be good. It teaches you so many things in life that make you a better person.”