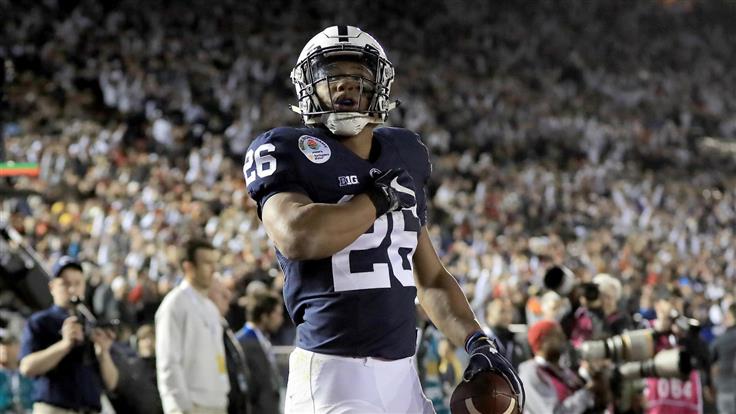 The Penn State football team made a huge statement Saturday with a resounding win over Big Ten rival Michigan. The Nittany Lions beat the Wolverines 42-13, and they did it mostly by riding their all-world running back, Saquon Barkley.

Michigan had a top-10 run defense before this game, only giving up 85.8 yards per game. They were physical, well-coached and prideful. By the end of the game, that seemed like a distant memory as Penn State rumbled for 224 yards on the ground and 506 yards of total offense.

It wasn’t surprising that Penn State beat Michigan, but the way the Nittany Lions were able to handle a tough defense has definitely put the nation on notice. Offensive coordinator Joe Moorhead never allowed Michigan’s defensive front to get comfortable or settle in. He moved Barkley all over the place with formations and motions. Barkley lined up as a slot receiver, outside receiver, even at quarterback. On top of that, he would motion across the formation, sometimes he’d go across and come back.

Michigan couldn’t properly set the defensive strength, or at least have a clear mental picture of where he was going to be, and they paid dearly for it.

Moorhead’s intentions of causing confusion was clear from the start of the game. Barkley scored on a 69-yard touchdown run in the first quarter on a simple concept with a small twist.

The power read isn’t a new concept. The play usually involves the tailback going across the formation for a sweep option. The quarterback would read the unblocked defensive end. If the end widens out to play the sweep, the quarterback would keep the ball and run the power concept up the middle.

All Penn State did was shift Barkley and quarterback Trace McSorley one step to the side, and Barkley became the QB with the power option and McSorley to the tailback as the sweep option. The sweep option hardly ever gets used in this concept, so it makes sense to make Barkley the primary runner. McSorley has the speed to be a threat on the edge, while Barkley is by far the more dangerous downhill runner.

It also doesn’t allow the defense to set its strength correctly. Defenses will usually set their strength opposite of the back in the shotgun formations, because that’s where he likely goes, but by shifting and quickly snapping the ball, the defense doesn’t have time to adjust.

Penn State didn’t even block this play correctly, but it seems the confusion may have caused Michigan to forget their gap responsibilities. The power play isn’t designed to cut back, but the weakside linebacker, Devin Bush, (No. 10) overpursues the play. Barkley sees and cuts it back for the long run.

In addition to shifting Barkley to quarterback, they also lined up in the slot and used a variety of motions so the defense couldn’t get a bead on him.

Here, Barkley lines up in the slot before motioning across the formation as the sweep read. The threat of Barkley running a sweep brings four defenders with him, and McSorley is able to walk into the end zone untouched.

Penn State also motioned Barkley across the formation and then sent him back across the formation as the sweep read. Again, this trace motion doesn’t allow the defense to set the strength of their defense properly. Typically, teams want to set the 3-technique defensive tackle away from the running back, but because of the motion, Michigan has their 1-technique away from the back, which makes it easier for the line to execute the power concept.

Again, the defense focuses on Barkley, and McSorley is able to run for a big gain with the power sweep.

Penn State also took advantage of Michigan overplaying the side away from the running back with a well-designed speed option.

When the ball the snapped, McSorley and Barkley move toward the left side to give a look like they are going to run a zone read to that side. Michigan’s inside linebackers bite hard on the fake.

The defense has a stunt called on the backside, but the left tackle reacts well to it and is able to block the end that is trying to knife inside. The defensive tackle who loops to the outside becomes McSorley’s read man on the speed option.

The end turns inside to play McSorley, so he happily pitches the ball to Barkley, who races down the sideline for his second rushing touchdown of the day.

Barkley didn’t just line up as a wide receiver to motion back and forth. He was also effective as a receiver and finished with 53 yards receiving and a touchdown.

Most linebackers cannot run with Barkley on routes. Yet defenses can’t sub out a linebacker for a defensive back, because then they are weaker against the run if Barkley motions into the backfield and the offense runs the ball.

For most of the game, Barkley lined up as a receiver to cause confusion, but in the fourth quarter, Penn State finally took advantage of the mismatch with Barkley on a linebacker by running him on a slot fade route.

Here, Barkley closes the space on linebacker Mike McCray (No. 9) before cutting inside and then working his way back to the sideline to get away from the free safety.

Barkley left McCray in the dust, adjusts to the ball, before having to double-catch it for the touchdown. Because Barkley beats McCray so badly, he has time to double-catch the pass. This touchdown not only put the nail in the coffin for Michigan, opposing teams will now have to be wary as Barkley as a vertical threat. Penn State has a huge game against Ohio State coming up this week, and after watching the film, they’ll have to respect Barkley as a receiver.

Barkley finished the game with 108 yards rushing on only 15 carries and 53 yards receiving and a touchdown. Sometimes, coaches can have an amazing offensive threat taken away by defenses scheming to take him away. Moorhouse and the coaching staff did a spectacular job of moving Barkley around and balancing scheming ways to get him the ball as well as using him as a decoy.