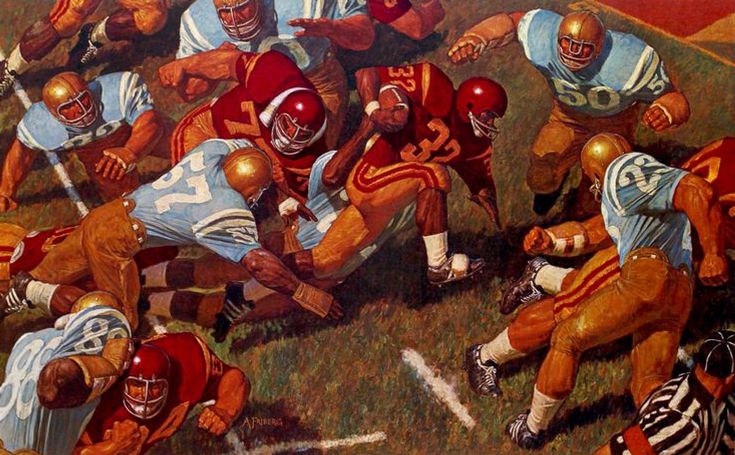 In the annals of college football, there have been several instances where two teams have met on the gridiron where the game has been so massive, so filled with legends and superstars, so seismic on the landscape of the sport, those games have earned the moniker of “Game of the Century.”

Hype, on-field talent, and stakes all play into games that have garnered the “Game of the Century” name. This year marked the 50th anniversary of one such game. The 1967 Battle of Los Angeles clash between the No. 1-ranked UCLA Bruins and the No. 2-ranked USC Trojans had all the hallmarks of a classic going into the game, and the stakes were never higher.

On the line in that clash was Pacific-8 conference title, a berth in that year’s Rose Bowl, the Heisman Trophy, and ultimately the greatest prize of all, the national championship; in 1967, the final polls were revealed before the bowl games. In a “regular” year, there is no love lost whatsoever between these two bitter rivals. In 1967, the intensity was ratcheted up to another level.

Starting the season, USC and UCLA were ranked seventh and eighth in the nation, respectively, by The Associated Press. The Bruins and the Trojans boasted strong candidates for that year’s Heisman Trophy. UCLA was backed by then senior All-American quarterback Gary Beban; USC was led by a junior All-American tailback named O.J. Simpson.

RELATED CONTENT: The role of an athletic director in a high school football program

Coming into the game, the lone blemishes on either team’s roster – ironically – would come at the hands of Oregon State. That year, the Beavers would be dubbed the “Giant Killers” by tying the Bruins and beating the Trojans.

The clash would take place at the L.A. Memorial Coliseum, and while both teams played their home games there (UCLA would move to the Rose Bowl in time for the 1982 season), the Trojans were considered the “home” team; regardless, both teams wore their regular home team uniforms for the game – the Bruins in powderkeg blue and the Trojans in cardinal red.

ABC broadcast the game in glorious full color (not always the case at the time) as their national game of the week, and the game featured the network’s top team in the booth in Chris Schenkel and College Football Hall of Fame Coach Bud Wilkinson.

The teams were incredibly evenly matched and knew each other very well. Both boasted Hall of Fame Head Coaches in Tommy Prothro at UCLA and John McKay at USC, and both boasted superstars on both sides of the ball.

Beban, despite being battered for the entire game (legendary sportswriter Jim Murray would write in his column after the game that if Beban were to earn to earn the Heisman Trophy it should be filled up with aspirin), was excellent and more than up to the task.

He would lead his team to scores in the first, third, and fourth quarters. His last touchdown on the day put UCLA up with just over 10 minutes in the game. This would set the stage for the man they called “The Juice.” As the Trojans passing game was all but ineffective throughout the day, Simpson carried the load for USC.

Simpson scored the Trojans’ first score of the day, and after Beban’s touchdown pass in the fourth quarter – a missed extra point put the score at 20-14 in favor of UCLA – the stage was set for what would go down as one of the greatest plays in college football history.

On a third-and-seven from their own 36-yard line, USC quarterback Toby Page audibled out of a pass play to a play for Simpson. After a great block by fullback Dan Scott, Simpson hit the hole, veered toward the left sideline, then shifted back toward the middle of the field heading for the end zone, history, and a tremendous win for the Trojans.

“The Big Play,” as it would become known, was immortalized by artist Arnold Friberg in his painting O.J. Simpson Runs for Daylight. The Bruins never crossed midfield the rest of the game. Despite severely bruised ribs, Beban would pass for 301 yards; Simpson would rush for 177.

In the aftermath, UCLA would drop their final game to Syracuse with Beban out. Despite the losses, Beban would win the Heisman Trophy; Simpson would go on to win in 1968.

The Trojans would go on to defeat No. 4-ranked Indiana – champions of the Big Ten – in the Rose Bowl by a score of 14-3. They would finish the season ranked No. 1 and be named the national champions.

Few Games of the Century have been able to live up to the pregame hype. This game more than lived up to its moniker; it has been hailed as one of the best in college football history and The Sporting News named the 1967 Trojans one of the best teams of the 20th Century.

It is a true classic that stands the test of time and perfectly exemplifies what makes college football truly special.

Watch a recap of the game here: