No. 6 Blog of 2017: How Scott Frost evolved Chip Kelly's offense at Central Florida 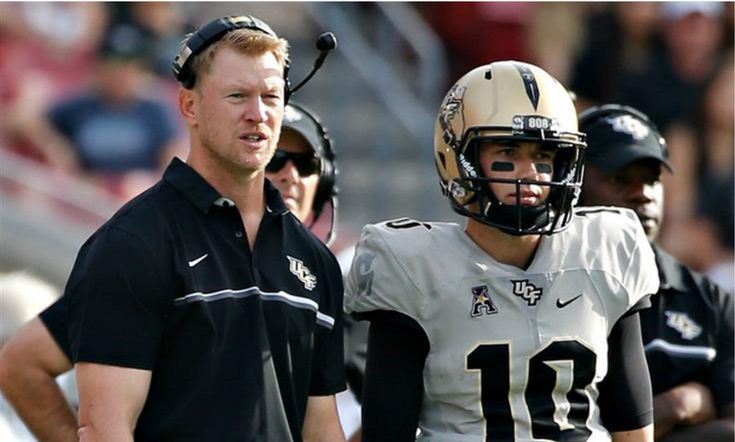 RELATED CONTENT: No. 10 Blog of 2017: 15 life lessons from football that should not be overlooked

Frost was already a well-known name before this season, but added substantial weight to his resume by leading UCF to an undefeated season after going winless two years ago. Perhaps the only thing faster than the Knights’ rapid improvement is a key part of how it ascended – its tempo offense.

Kelly captured the attention of college football and eventually the NFL with his blur offense. Lining up and snapping the ball before the defense could get physically set or mentally settled proved to be a huge advantage. However, in football, like in life, there are sacrifices that have to be made when trying to achieve something.

RELATED CONTENT: No. 9 Blog of 2017: 3 reasons why your child should play youth football

Kelly’s offenses achieved the break-neck speed he wanted, but sacrificed complexity and variety. NFL defenses figured out how to key on Kelly’s offenses, and it quickly lost its effectiveness. Chris Brown chronicled why Kelly’s offense eventually failed in this article and the video below.

Frost credits a lot of success to Kelly. “My time at Oregon with Chip, and then taking his offense and continuing to evolve it, that’s really what’s gotten us to where we are,” he said. His offense at UCF is made up of mostly the same concepts: zone read, pin and pull sweeps and power. However, Frost has evolved it by making it tougher for offenses to key on what they’re doing with pre-snap movements, run/pass options and key-breaking concepts that don’t allow the defense to get mentally settled.

Here, the UCF option is running a simple triple option out of the spread, with the options to hand off to a running back running inside zone to the left, quarterback keeper to the right and pitch. It’s a base concept we saw Kelly run at Oregon a thousand times.

The difference is how Frost sets up the play. Before the motion, the defense is prepared to defend the zone read in the opposite direction of the running back, to the right. They have an extra defender toward what they think will be backside (left) of the play, in case the quarterback keeps the ball. However, the player in motion allows the play to run in the opposite direction. The zone read actually runs to the left, and the defense doesn’t have enough players to account for quarterback and the pitch.

RELATED CONTENT: No. 8 Blog of 2017: The longest current high school football winning streak in every state

The defense is out of position and has to hustle to recover. Quarterback McKenzie Milton (10) takes advantage of their discombobulation, and makes a remarkable play with the late pitch for the touchdown. That’s not how it’s drawn up, but the pre-snap movement caused enough confusion for the play to work.

The offense begins with H-back Jordan Akins (88) lined up on the opposite side of the running back, but before the ball is snapped, Milton motions him to the same side before quickly snapping the ball.

In Kelly’s old offense, the H-back would usually block a backside contain player, but Frost has Akins run an arrow screen instead. Milton likes the numbers advantage he has, and throws the ball to Akins, who picks up a first down.

The H-back motion doesn’t allow the defense to settle in and call a play that could stop the inside zone, but also adds another element for the defense to think about. The H-back could block the backside or become a pass option. The defense has to account for both possibilities.

A block and arrow screen has the same purpose - to prevent one defender from making a play on the base run concept, only the arrow screen provides a more explosive option.

RELATED CONTENT: No. 5 Blog of 2017: There is nothing like high school football, and we need to remember that

Defensive coordinators also have specialized RPO defenses that involve rotating a safety away from the running back.

Running back Adrian Killins (No. 9) lines up out wide, but motions to the backfield on the opposite side right before the snap. The defense doesn’t have time to adjust, and Milton throws the bubble screen and picks up a first down.

Trying to line up correctly against UCF’s multiple formations out of their no-huddle, the defense is forced to quickly adjust to shifts and motions. If a defense isn’t dialed in, they're going to make mistakes.

Frost also has some key-breaking plays that can make life difficult on opponents. If defenders grow accustomed to the pre-snap movements and think they can key in on what Frost’s offense is doing, he also has a handful of concepts that can confuse the defense’s post-snap keys.

The defense’s hesitation and movement toward the left of the formation creates favorable angles for the offensive line to block for the speed option to the right. They open up a huge lane for Milton, and he picks up yet another first down.

Another concept Frost uses to break keys is similar to the bash concept, which is simply a zone read where the quarterback and running back switch assignments. The quarterback is the runner in the zone concept, while the back is the backside option in case the end crashes. Instead of a zone run, Frost uses a rollout pass concept.

The defense has a safety rotation called to the side that the back is lined up on, presumably to help on any options on what they assume is the backside of the play. However, the backside is actually to the left of the formation, as the line blocks a rollout pass to the right. Milton sees the end crash on the backside, so he hands the ball off the running back on the sweep.

One of the biggest reasons why Kelly’s and Frost’s systems are so successful is because of how their concepts build off and compliment each other. For example, once defenses think they have the roll-out bash concept figured out, Frost will counter with a roll-out throwback post play.

The play starts with a sweep fake to the left, which causes the defense to flow that way because they’ve been gashed by it for most of the game. Once they realize Milton has the ball, they have to hustle to cover their zones toward the rollout side.

On the backside, the two receivers run a switch concept, which further adds to the confusion. Two defenders cover the short in-breaking route, while no one covers the slot receiver running an outside release post route.

The post gets wide open, Milton has time to set his feet and loft an easy pass for the go-ahead touchdown midway through the fourth quarter.

RELATED CONTENT: No. 4 Blog of 2017: 20 bad sports parenting habits that will ruin your child’s season

Imagine having to line up and face this offense as they hurry up to the line play after play. There is so much thinking that defenses have to do in a short amount of time, and when they finally think they have a bead on the offense, Frost hits you with a key-breaking play. While UCF moves fast, they cause their opponents to suffer from paralysis by analysis.

Kelly said, “I think the coaches that are the best, really what they do is make the simple seem complex to their opponents, but they make the complex seem very simple to their own teams."

This is really the key to both his and Frost’s offense. Though Frost has taken it to another level by adding additional layers of deceptions to his concepts, underneath it all are just the same base plays over and over again. And that’s the beauty of it all.

This is an updated version of a blog that originally posted Nov. 29, 2017.