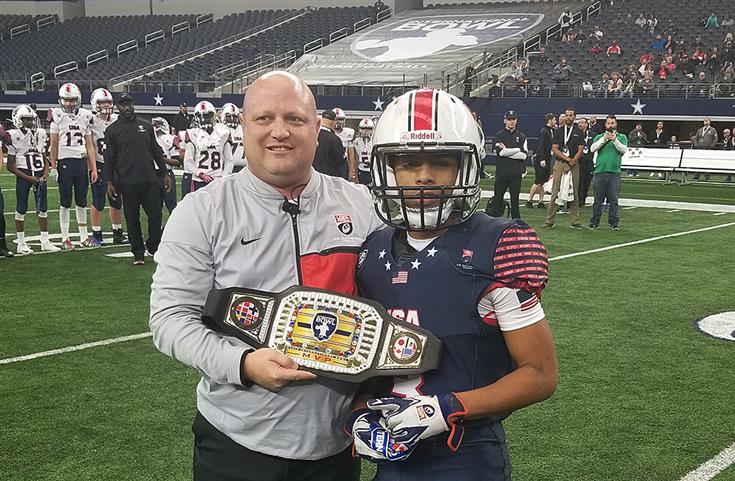 The 2018 International Bowl got underway Friday at AT&T Stadium in Arlington, Texas. Here's a look at the on-field results in the first of three days of competition over the next week.

In the highest-scoring game in International Bowl history, the Stars and Stripes combined for 889 yards, led by Stars running back and MVP Carson Green (San Antonio), who finished with nine carries for 131 yards, four catches for 188 yards and five total touchdowns. 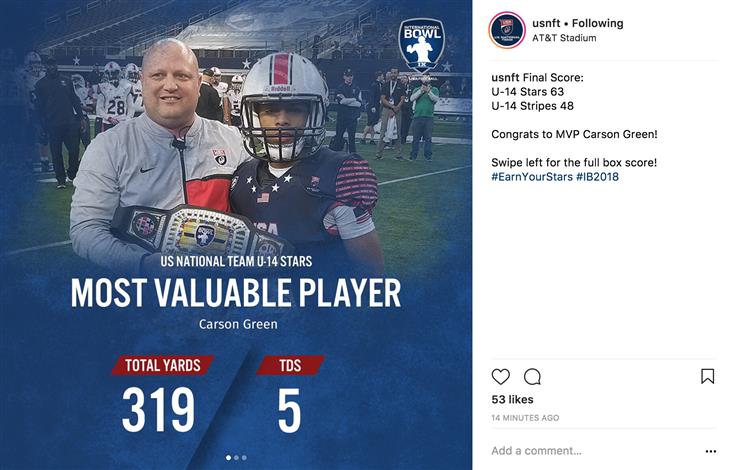 Jacob Lindsey (Baxley, Georgia) helped the Stripes get on the board in the first quarter with an interception and a 50-yard return. On the next play, Ajon Bryant (Corona, California) took a sweep left for a 40-yard TD. Jaxon Smolik (Adel, Iowa) upped the lead on the Stripes’ next possession with a 17-yard read-option keeper for a score.

After three first-quarter turnovers, the Stars got it together early in the second, as Ashton Cozart (Puyallup, Washington) caught a 45-yard TD pass from Brennan Storer (Dallas, Texas).

Following another Stripes takeaway, Bryant scored on a 16-yard swing pass, but after that, the Stars exploded.

During a 28-0 spurt to finish the half, Green scored on a 2-yard run and 45-yard catch from Ezekiel Anderson (Greenwood Villiage, Colorado), while Micah Lewis (Fort Lauderdale, Florida) ran over and through defenders for a 16-yard TD and added a 1-yarder just before halftime.

The streak hit 42 unanswered points when Green opened the second half with a 59-yard TD, and Peyton Woodyard (Lake Elsinore, California) had a 48-yard scoring catch from Storer.

The Stripes cut it to a two-score game three different times, with two touchdowns by Andre Craig (Locust Grove, Georgia) – who finished with nine carries for 138 yards, and another by Bryant, but got no closer, held off by Green’s fourth and fifth scores of the game. 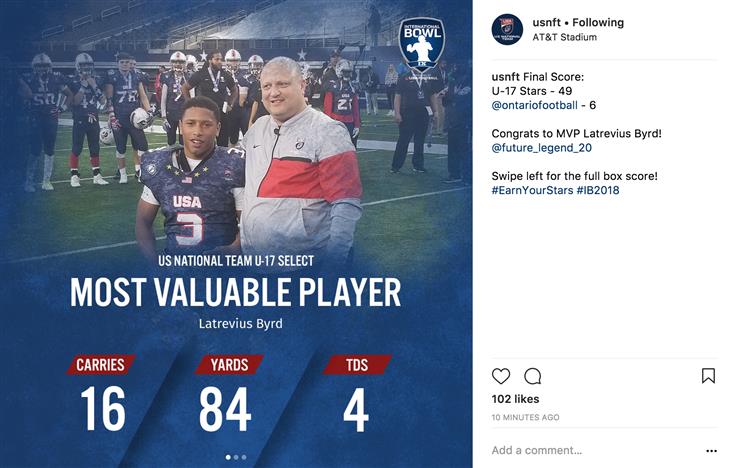 Defensive Player of the Game Shiloh Means (Indianapolis) had an interception, two tackles and 146 return yards, including a 91-yard kickoff return for a score in the second half.

After a scoreless first quarter, the Stars reeled off three touchdowns in the second for a 21-0 halftime lead.

Myles Shaw (Kansas City, Missouri) started it off with a 1-yard TD run, followed by a 20-yarder from Byrd. The final score came on an untimed down, after back-to-back Stars penalties, as Duke Doherty (Everett, Massachusetts) ran a quarterback keeper up the middle for a 12-yard TD, hurdling through two defenders at the goal line on the final play of the half.

After Byrd hit paydirt again with a 8-yard run, Ontario broke through with five minutes left in the third quarter, as Xavier Gervais connected with Johnathan Peshko for a 23-yard score.

That momentum didn’t last long, as Means took the ensuing kickoff to the end zone. Bryd added two more rushing touchdowns in the fourth quarter for the final margin.

Shaw also had 84 yards on the ground for the Stars, who ran it 48 times for 258 yards, as the U.S. outgained Ontario 375-120. Grant Witcher (San Antonio) led the squad with six tackles, including a sack and two for loss.

UANL-Mexico made the most of its International Bowl debut, as its bend-but-don’t-break defense was the story of the game. While the U.S. held a 373-183 yardage advantage, it didn’t crack the end zone until just three minutes remained. 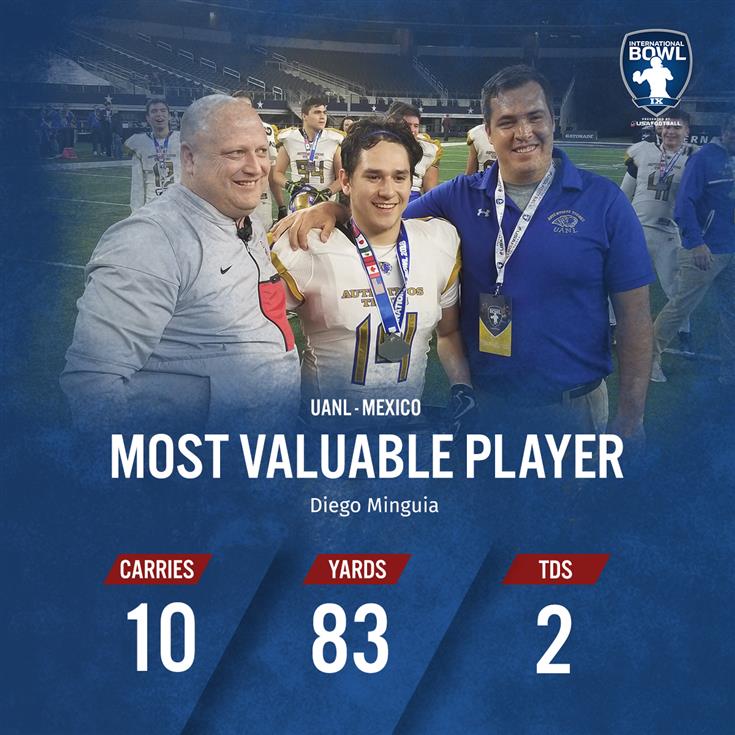 After giving up a 33-yard field goal by Tristan Heaton (Humble, Texas), Mexico took the lead with a minute left in the first quarter with an impressive drive capped by a 1-yard TD run from Minguia.

Mexico increased its advantage with a blocked punt early in the second quarter, returned for a score by Diego Ibarra, which gave his team a 13-3 halftime edge despite having just 85 yards of offense.

While the U.S had 125 yards in the opening half, two turnovers and a 1-of-7 third-down conversion rate didn’t help.

The lead hit 20-3 midway through the third quarter, as Minguia burst through the right side for a 51-yard TD run.

The U.S. got a late score on a 70-yard pass from Braden Gleason (Muldrow, Oklahoma) to Ta’von Gwynn (Killeen, Texas). A fumble recovery gave them the ball, but an interception in the end zone by Gerardo Herrera ended the threat.

Gleason finished 19-of-27 for 203 yards, while Gwynn had eight catches for 153 yards. Terry Bland (Augusta, Georgia) led the defense with eight tackles, and Matthew Williams (Locust Grove, Oklahoma) had three for loss.

Jeff Miller (Murrieta, California), who had a huge first half, was named MVP. 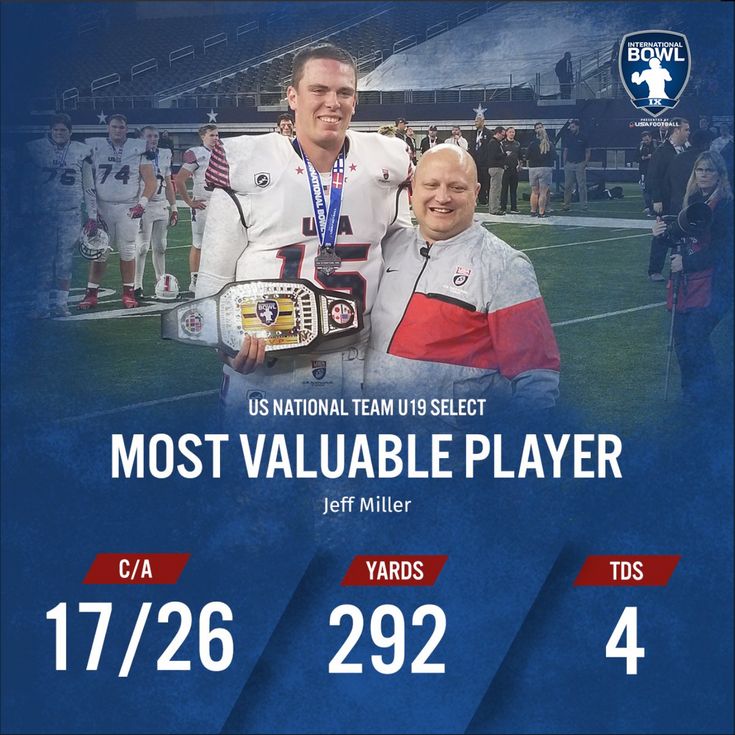 The U.S didn’t waste time in this one, as Miller hit Harrington Greer (South Bend, Indiana) for a 73-yard score on the second play of the game. One play after a Nordic fumble, Miller connected with Earnest Crownover III (Grandview, Texas) on a 24-yard TD.

While Nordic got on the scoreboard with a 7-yard run by Emil Neumann in the second quarter, the Miller-to-Greer connection struck for two more TDs, and another punt-snap miscue recovered by Defensive Player of the Game Joe Watskey (Edwardsville, Kansas) led to a 2-yard sneak by Justin Kapp (Manassas, Virginia) and a 38-7 halftime lead.

Miller finished the first half 12-of-13 for 247 yards and four scores.

Lasse Engel came through with a big highlight for Nordic, with a 96-yard kickoff return for a TD.