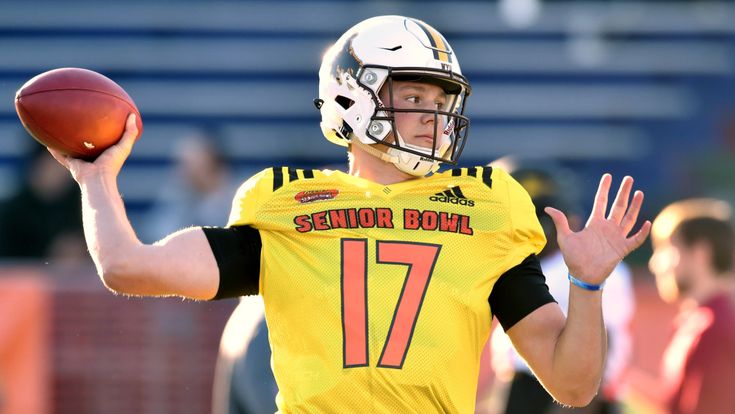 Photo via For the Win/USA Today

The 2018 quarterback NFL Draft class is one of the more polarizing in recent memory. There are several intriguing prospects, but there isn’t a consensus No. 1 pick.

The most polarizing prospect of all is Wyoming’s Josh Allen. Reportedly, the Browns are might take him No. 1 overall, while others think he’s a project that should be drafted in day two or later.

Allen has all the physical tools you want in a quarterback. In fact, he’s as physically gifted as any I’ve seen in a long time. He has the arm strength to make throws that some professional quarterbacks could only dream of. He has the physicality and athleticism to get away from potential sacks and make plays with his legs.

However, he is average or below average in several important traits that successful NFL quarterbacks have. We’ve seen prospects like Allen before. Quarterbacks like Jamarcus Russell tantalized teams with his arm only to fail. Arm strength and making spectacular plays in college don’t automatically equate to NFL success. The question for scouts is, do they think he could improve in these areas with NFL coaching?

While statistics aren’t everything, they do tell part of the story. Though Allen didn’t face much top-level competition at Wyoming, he has a 56.2% completion percentage. That’s nearly 4 percent lower than 60 percent which is considered the baseline you want a professional QB to have. His accuracy problems show up on film as well.

Oftentimes when Allen misses, he misses high and sails passes. This is in part because he separates his hands from the ball too early and he over-strides. This makes it harder for him to open his hips, which means he’s relying too much on his arm to make the throw, which could lead to overthrows or high throws. This mechanical error could be corrected, but it takes dedication and a lot of time with a good quarterbacks coach.

Allen's touch passes are too far in between and inconsistent but here's a casual 58 in the air yard bomb. pic.twitter.com/LXucB9gvuW

As mentioned earlier, Allen has one of the strongest arms I’ve seen in a college quarterback. He’s in a class with Jay Cutler, Ben Roethlisberger, and Matthew Stafford in that regard. In the clip above, he easily throws the ball 58 yards and puts it on the money for a touchdown.

However, he doesn’t throw many passes with touch, and his accuracy dips when he tires, oftentimes missing badly.

He routinely made sideline throws from the opposite hash mark. In the clip above, he makes this throw while getting pressured and hit on the play. In college, the hash marks are wider, which means this pass had to travel in the air for a long distance, yet it’s on target and thrown with incredible velocity.

Similarly to Stafford, Allen’s arm strength and ability to drive the ball toward the sideline helps him zip passes into the opening between a cornerback and safety in Cover 2.

Most NFL QBs will pump fake to draw the safety toward one side, to open up space in the honey hole or anticipate when the hole will open up. Allen’s arm is so strong that he's had success without throwing passes with anticipation. However, defenders are much smarter and faster in the NFL, so he won’t be able to get away with late passes.

On this pass, the defense is playing a form of quarters that essentially becomes Cover 2. He tries to fit the pass in the honey hole, but waits much too long. He should've started the process of throwing the ball as soon as the corner begins to slow down. Instead, he waits until the receiver clears the cornerback, which gives the safety ample time to get over and intercept the pass. His receiver is able to wrestle the pass away for a spectacular catch, but these types of passes could put his receivers in harm’s way or get intercepted.

Elusive in the pocket

Allen is a big quarterback at 6-5 and 237 pounds. With his size, speed and elusiveness, he's very difficult to sack. He often breaks arm tackles and scrambles to buy time or get yards with his legs.

He has the ability make some spectacular plays while on the move.

Allen climbing the pocket and throwing a dime to the back of the end zone. pic.twitter.com/ayQ9oVknRs

On this pass, he evades an edge rusher and does a good job of climbing the pocket before throwing a perfect bomb downfield or a touchdown.

But Allen also has had some badly missed passes while on the run too. This in part because he doesn’t do a good job of throwing off the right foot or rotating his shoulders which means he’s throwing with all arm which leads to erant passes.

If a young quarterback has trouble identifying the blitz, NFL defensive coordinators will blitz him endlessly. It’s not an easy to do, but NFL quarterbacks have to be proficient at recognizing the blitz with pre-snap cues.

This isn't an easy blitz to read, but again, this is something an NFL quarterback must be able to do. On first down, the defense only has a five-man box against six blockers, so either Allen has to know something is up or he could check into a run play and take advantage of the light box. Even if they add players to the box post-snap, they’ll have a difficult time getting into their run fits.

Allen also has to know that he has five-man protection, and because the protection is sliding toward the right, he is responsible for the sixth man or unaccounted-for defender. He could have his running back moved toward the blitz side, and have him watch for the blitz before releasing on a route. It’s unknown what his coaches want to do in that situation, but not having an answer for the blitz in five-man pass protection is unacceptable.

Allen seems to have trouble identifying coverage at times.

On this clip, the safeties show a two- deep look while the corners show a clear man-to-man look. The offense has a stick concept called toward the field. Against man coverage with the outside corner head-up on the receiver, Allen should know to look to throw the out quick.

Instead, he looks like he’s waiting on the running back route to develop. It takes too long, and Allen senses the pressure and breaks the pocket. To make matters worse, he tries to throw the out late and gets intercepted.

Though Allen has a high ceiling, he is far from a finished product. His offense at Wyoming doesn’t have a wide array of concepts. It doesn’t seem like Allen is in charge of setting the protection or has the ability to change the play at the line of scrimmage, which leads to questions of whether Allen’s lack of mental responsibilities is because of his shortcomings or just the coach’s choice. Without talking to his coaches or testing Allen’s acumen on the chalkboard, his film suggests that he has to improve his ability to recognize defenses pre-snap and process them post-snap.

Allen will need at least a year to get immersed in a system and improve his ability at the line of scrimmage before he should be looked at as a starter.

Allen’s talents would be best used in a heavy run attack that features downfield shots off play action. A strong run game would invite less complicated coverages for him to read. Play action will open up windows for him to use his strong arm to zip passes into or throw bombs. It’ll also allow him to get outside of the pocket and throw the ball, which will play to his strengths. An offense that utilizes spread-option concepts could also take advantage of his size and athleticism.

The perception of Allen will be skewed because on one hand, his strengths are elite and spectacular while he is average to below average in several traits that make QBs successful in the NFL, such as the ability to read defenses and process the field. These traits take a little more work to find, but his deficiency in these areas sinks his overall grade. As a player with elite physical tools but needs a lot of development, he gets a second- to third-round grade.

If a team feels strongly that they could develop Allen, taking a gamble on him the second round could be appropriate. However, taking him toward the top of the draft could be a huge mistake. Putting him in a situation where he might get strong pressure to start right away could hurt his long-term development.