How the gallop technique works for offensive linemen 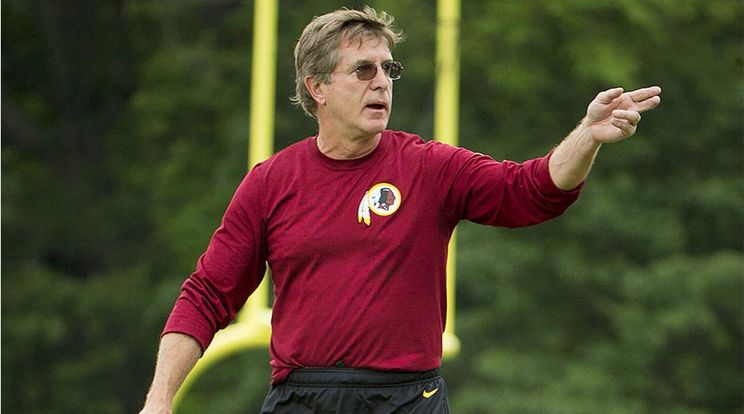 Washington Redskins offensive line coach Bill Callahan is one coach who has taught the gallop technique to his players (Photo via si.com)

The gallop is an offensive line run blocking technique. It is a Bill Callahan and Larry Zierlein staple (among others) that is used to close ground more quickly than traditional footwork in the running game. It requires an explosive drive out of a two- or three-point stance with dynamic weight transfer from the outside to inside leg moving laterally or at a vertical angle to gain ground and fit on a defender in tight quarters.

This technique can be a more efficient way to get a quick scoop on a hard-to-reach defender, typically when they are aligned in a tight shade to either shoulder of the blocker, or when uncovered, needing to overtake a defender that is head-up on an adjacent blocker.

It’s typically used in power, duo, and inside zone concepts. A playside tackle will commonly gallop into a 3-technique defender to help collapse him past the guard into the A gap on power.

Here is an example of exactly that from Arizona Cardinals right tackle Bobby Massie using the gallop to help collapse the hip of the 3-technique in a duo concept before coming off to pick up the linebacker:

Guards oftentimes use it to get hip-to-hip with a center or tackle on a double-team to more quickly put themselves in position to take over, helping to speed up a release to the second level by their linemate.

They also can use it to help cave in a 0- or 1-technique nose as demonstrated by former Cowboys LG Ronald Leary in the clip below. Notice the initial step to gather himself, followed by two balance steps by the backside, then frontside foot. This puts him in excellent position to generate movement and help out on the double:

This technique helps to put the blocker in optimal positioning for a near shoulder, flipper, or double-under technique at the point of attack when turning shoulders and losing ground to gain ground are not options.

In the next clip, we will look at Dallas Cowboys LT Tyron Smith using the gallop technique to scoop a 4i technique shaded to his inside shoulder on a fourth-and-1 play early in the game.

Dealing with inside shades is one of the more difficult assignments for offensive linemen. To do so requires an efficient means of coming out of their stance in tight quarters, with little margin for error. Offensive linemen could utilize the gallop technique to get the job done in these situations.

This next clip shows former UTEP and current New York Giants LG Will Hernandez executing a variation of the gallop technique to overtake a 0-technique nose tackle head-up over the center on an Ace block to the backside linebacker.

This variation is used when time is of the essence, requiring a more exaggerated step out of his stance with the inside leg without a gather step to reset:

Next, we go to the right side and take a look at Carolina Panthers RG Trai Turner in the same position as Hernandez, needing to quickly gain ground laterally to overtake on a 0-technique Ace block to the backside linebacker with center Ryan Kalil.

Turner opts to use a quick gather step out of his stance to reset his feet as he gains ground laterally. He does a nice job with his pad level and hands of using leverage to fit underneath his man, unlocking his hips to lift and drive him out of the hole to spring a big gain:

This last clip is another Callahan disciple (along with Tyron Smith from earlier), Jermey Parnell, advancing his way to the inside gap so he can overtake the 3-technique defender from the right guard prior to him releasing to the second level on an inside zone run.

Notice his first step is a subtle gather step, followed immediately by a hop to readjust his base, putting himself in position to seal off the defender, achieve his fit, and ready to generate force off his in-steps with his feet underneath his frame:

To summarize, the gallop technique is a crafty, yet simple run-blocking maneuver with several variations that can be added to a blocker’s toolbox as a primary or alternate means of accomplishing their assignment when a quick fit and immediate movement is imperative.