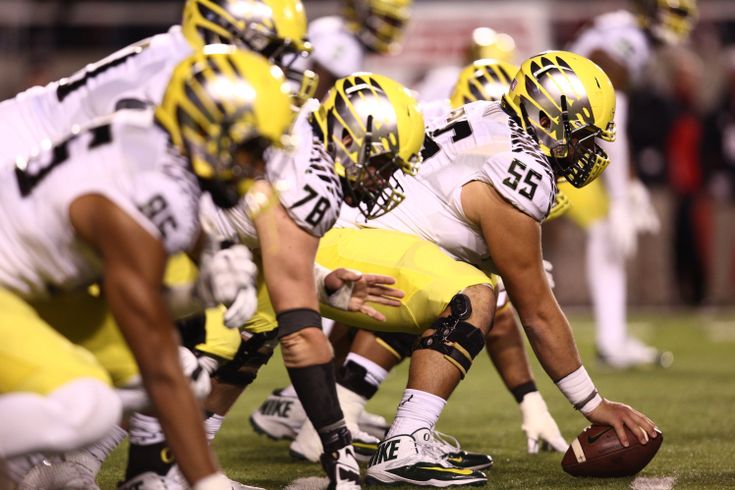 Throughout the Chip Kelly and Mark Helfrich era, the University of Oregon football team consistently had one of the most explosive and efficient offenses in the country utilizing their spread-option offense. Scott Frost, the current head coach at Nebraska and former Oregon offensive coordinator and wide receivers coach, once compared the Oregon offense to the option offense utilized by Nebraska under Tom Osborne. Frost said in 2011, “what we ran at Nebraska in a lot of ways is very similar to what Oregon runs right now — we’re just out of the shotgun versus under center. But a lot of the concepts of the option game are the same.”

As opposed to the traditional veer schemes that flexbone-option teams use, Oregon would utilize the triple option with its inside zone read scheme. To block the inside zone scheme, Oregon would use a count system. The center would identify the “0” or point-defender. The “0” is the first defender to the playside, and is where the count will start to both sides. The center is responsible for the 0, the guards are responsible for the 1’s, and the tackles are responsible for the 2’s. They also have additional calls that will identify their double teams, but we will not delve into those right now for simplicity’s sake. The backside No. 3 will either be blocked by a tight-end or fullback/H-back, or be read by the quarterback if the offense is running a zone-read play. The backside No. 4 will be the pitch-key if the offense is running a triple option scheme. For more information on the count system that Oregon used, click here.

Here is a diagram of the count versus a 4-2 front if the offense were running inside zone to the left: 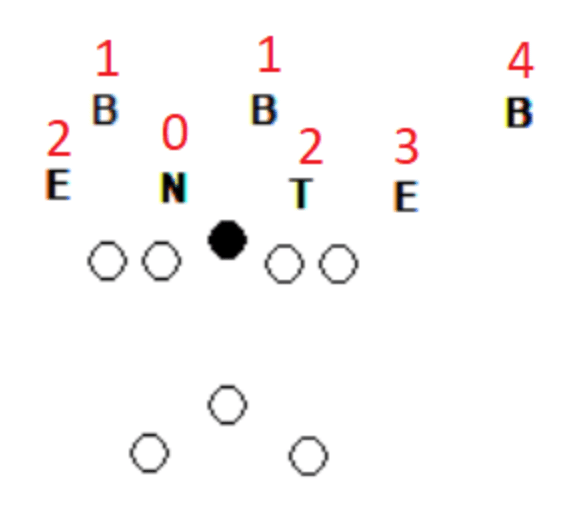 Here is a diagram of the Inside Zone Triple scheme versus this front (the end is the dive-key, the outside linebacker is the pitch-key): 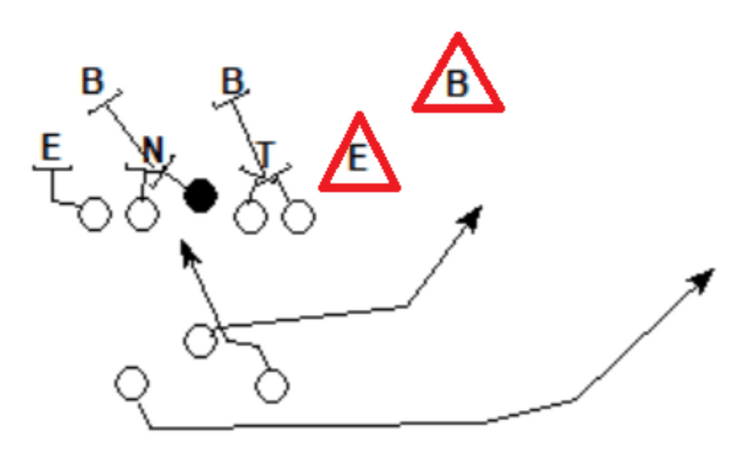 Oregon would most frequently run its triple option scheme with two receivers on the backside of the play. If on the backside of the play, the two receivers would be responsible for the two defenders closest to the sideline, meaning the slot would bypass an apexed (defender aligning halfway between the tackle and the slot receiver) outside linebacker to block the safety as shown here: 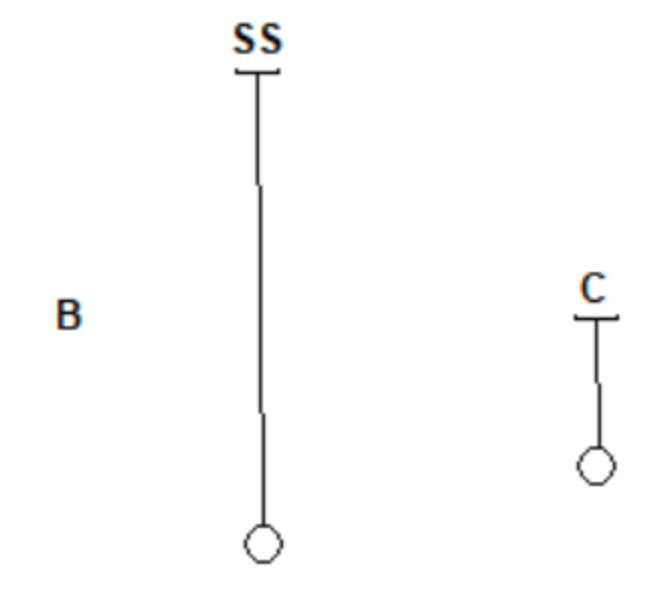 Here is a diagram of the full play:

Here is an example of a give read on this play:

The end breaks down with his eyes on the quarterback, so the QB gives the ball to the back on the inside zone play. Even though the outside linebacker comes down close to the box and is in a position that would result in a throw on an RPO play, he is frozen with his eyes on the QB and the pitchman, leaving him in a position where he cannot make a play on the inside zone run. This leaves the offense with one ball carrier and five blockers going against five defensive players, with the free safety being the only player in position to help. The MIKE linebacker (No. 44) jumps outside as he sees the triple-option action, so the back-side tackle (BST) kicks him out and creates a wide-open cutback lane in the backside B-gap allowing the back to reach seven yards downfield before the safety makes first contact. This play helps to illustrate a few of the advantages of the triple option:

Here is an example of the QB getting a keep read on this play:

Here is an example of the pitch on this play:

The most common defensive adjustment used in response to this play was the “scrape-exchange” in which the defensive end pinches, forcing the QB to keep the ball, and the backside linebacker scrapes to give the defense a free hitter on the QB. Here is a diagram of this defensive tactic: 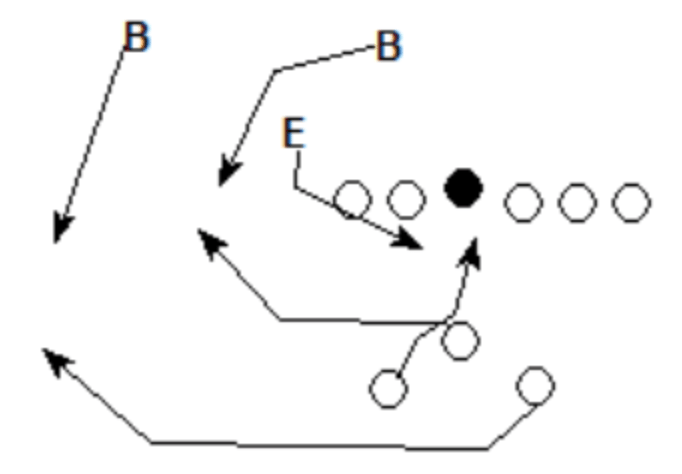 Here is an example of Wisconsin using this strategy against Oregon in the 2011 Rose Bowl: 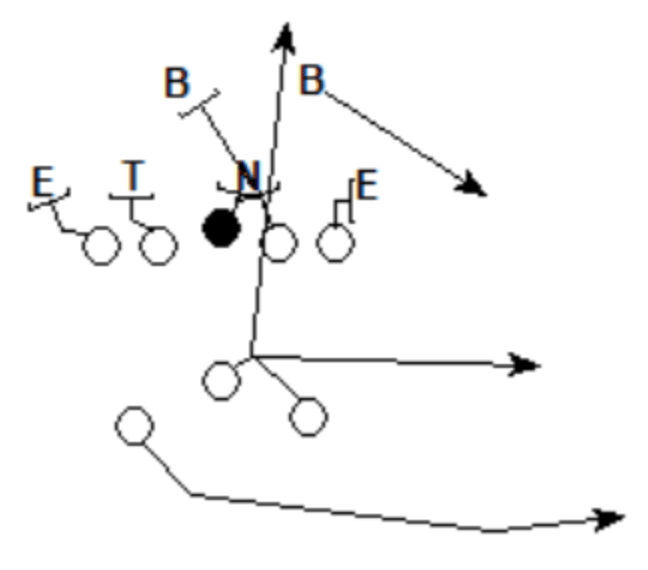 With the backside linebacker scraping, and the offense able to block the backside end, this typically leaves the backside B-gap exposed. Here is an example of this happening on film:

The BST feels the end with his right arm before turning back to block the end as soon as he sees No. 40 scrape himself out of the box, which leaves the offense with a wide-open running lane in the backside B-gap.

If the backside linebacker were to stay in the box initially and then scrape after the BST had already climbed to the second level, then the BST would kick him out, allowing the QB to cut up inside off his block as seen here:

I believe the inside zone triple option could be a good addition to any offenses out there that are already running the zone read. Hopefully this article has helped you get a feel for the play and could help you implement it into your offense if you choose to do so.