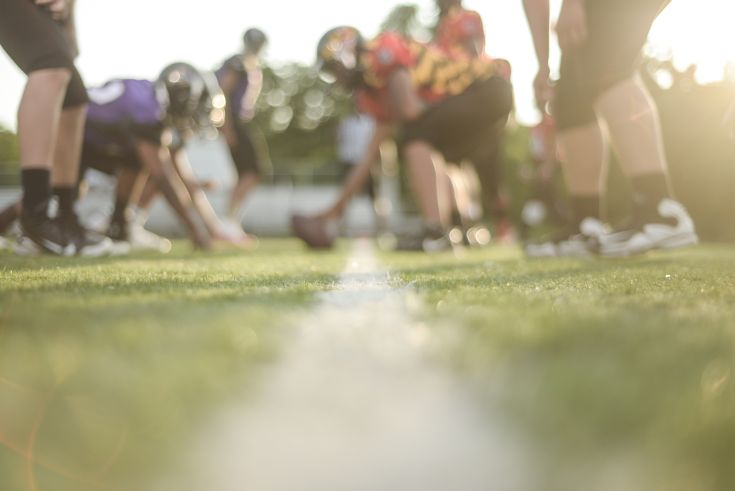 Also, if the quarterback keeps the ball on a midline option, he gets north and south right away rather than running to the perimeter. This makes the “keep” option even more dangerous.

Chip Kelly was the first coach that I remember implementing the midline read in a spread offense at Oregon. He ran an inside zone in which the backside tackle would block out on the end and leave the backside defensive tackle unblocked as the read man.

The midline option in this case was a derivative of the zone read in which the offensive line blocks inside zone.

The University of Oklahoma pairs the midline read with outside zone. This is an effective play because it really forces the read-man to commit. Because the aiming point for the running back is wider, the read-man has to really turn and run to make a tackle, which makes him an easier read for the quarterback.

Essentially, the front side will block with their regular outside zone rules, while the backside guard and tackle will have different assignments.

The backside guard climbs straight to the linebacker and leaves the backside defensive tackle (1 technique or 3 technique) unblocked.

The play could be run with one back or two backs. If ran with two backs, the front side back will arc release outside and either get to the overhang player or help seal the edge.

Here, the Oklahoma offense runs the midline read out of a two-back set against a 4-2 over front. The backside defensive tackle is in a 3 technique and is left unblocked. The backside guard climbed straight to the second level.

The read-man shuffled in place, which is technically the right way to play it because he didn’t give the quarterback a “keep” read and wide-open lane to run through, but the stretch play created too much space to cover and he had no shot of getting to the back when he cut the play vertical.

On this play, the TCU defense is in a 4-3 with double one techniques. With the read-man being closer to the playside, the quarterback should know he has a higher chance of getting a “keep” read.

The backside guard takes a reach step like he’s blocking outside zone. This sells the outside zone, which could cause the read-man to fly upfield instead of slow-playing it. It also gives the guard a better angle to cut off the backside linebacker.

Here’s an example of the midline read with a pin and pull sweep, which is a derivative of the outside zone:

Overall, it’s a great play that just adds on to the list of things that defenses have to commit time to defend. The midline read is also an easy install, especially if your team runs outside zone or pin and pull.