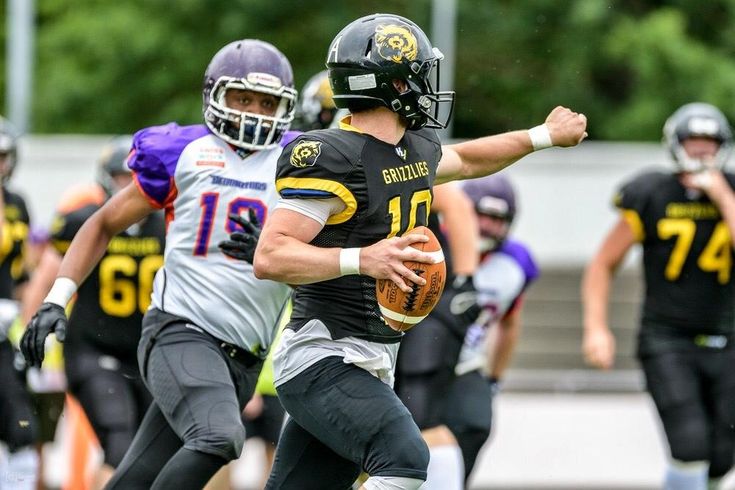 Kevin Burke as a player with the Bern Grizzlies. (Photo via Kevin Burke)

Few people have experienced as much success in college football as former Mount Union (Ohio) and U.S. National Team quarterback Kevin Burke. While starring for the Purple Raiders in NCAA Division III, Burke won the national championship in 2012 and led the team back to the championship games in 2013 and 2014. He also won the Gagliardi Trophy – given to the best player in Division III – in back-to-back years in 2013 and 2014.

After suiting up for the National Team in 2015 and winning the International Bowl championship, Burke decided to continue his playing career overseas. He first suited up for the Vienna Vikings in 2017 before joining the Bern Grizzlies in 2018. That’s his “spring time” job; in the fall, he is an assistant coach for the Case Western Reserve University Spartans. In 2017, his squad was ironically defeated by his alma mater in the second round of the Division III playoffs.

RELATED CONTENT: The Middle School Bowl Games Series was the experience of a lifetime

He took some time from his busy schedule to reflect on his time playing for Team USA and on continuing his football career in Europe.

EM: When did you first start playing organized football? Do you remember why you initially wanted to play?

KB: I started playing organized football when I was 6 years old and I got to play flag football. I started really young, but I’ve always had a passion for the game. I guess you could tell that by what I’m doing now!

I really fell in love with it from day one. I mean, I got to play running back and no one was hitting me back then, so you’re out there running around and developing a love for the game and for competing. Once I found out that I had a talent for throwing the football, I dove into that with everything I had and wanted to see how far I could go in the sport.

EM: You grew up in one of the really underrated hotbeds of high school football in Cleveland. What was that like for you, and how passionate and competitive are the games there?

KB: Yeah, growing up in Cleveland, it isn’t nationally known as much as I think it should be for the number of talented guys that have come out of there. I mean, just from guys my age that I competed against, you have people like Cecil Shorts and Cardale Jones. Being in that environment definitely fueled my desire to be as best as I could be.

High school football is amazing and there is a huge college scene, as well. I’m a Cleveland guy. It’s my home and to be able to have been a big-time player for a big-time high school and win championships in my hometown was a dream come true for a kid like me.

EM: Talk a little about the decision to attend Mount Union. It is obviously a storied program with tremendous history and tradition. What made you want to go there to play for the Purple Raiders?

When I took my visit there, [current athletic director and longtime head coach] Larry Kehres and I spent the whole day together. He told me to bring some of my game tapes with them and we started off with my highlight tape. Then, he really took me aback when he said, "Let’s watch your worst game." I didn’t know what to think, but he pointed out some things and he told me that I was the kind of quarterback he wanted. From that day, I knew it was where I wanted to be. That feeling didn’t change when Vince Kehres took over as head coach, either. Mount Union has a special place in my heart.

EM: Let’s talk a little bit about what you’re doing now. How did you decide you wanted to continue your playing career overseas?

KB: Well, Dan Hawkins, who was my head coach with Team USA, had a tie over there, having been the coach of the Vienna Vikings. He’s been like a father figure to me and he has been extremely helpful in getting me overseas and making sure I had everything I needed.

For me, though, the chance to continue playing football, to earn a living at it, and grow as a player was just too good of a chance to pass up. I love playing over here. The crowds aren’t anywhere near as big as they are back home, but that’s OK because you know the fans that do come out have a rooted interest in the teams and the players. I love being over here and I want to continue with it and growing for as long as I can.

EM: How did your opportunity to play for the U.S. National Team come about? What were the practices like for you?

KB: I got an email from [then Director of Operations] Todd Bell. He said there was an opportunity for me if I wanted it. I told him I was absolutely in and he had Coach Hawkins give me a call after that. Right from the first phone call, Coach Hawkins showed me nothing but love and I felt like I’ve known him for years.

The practices for Team USA were unlike anything I’d been a part of. You are with this whole group of guys who you know were some of the best guys at their school and you know that all of these guys belong there. It was really an awesome experience.

EM: Since you had had a number of years of playing at that point, did you still get any “butterflies” when you got the chance to suit up in the Team USA uniform for the first game?

KB: It’s weird, but yes, I did. For me, growing up in Cleveland and being a fan of my alma mater St. Edward High School and then getting to put that uniform on was amazing. Then going to Mount Union with all of their national championships and their tradition was amazing. But, there was something even more special about putting on the red, white, and blue and representing your country.

I’m not a military guy, but getting to wear the stars and stripes and playing for my country was a blessing. When I got into the locker room that first time and seeing all of those uniforms in there like that was something I’ll never forget.

EM: What would you say was your favorite part of the whole experience as part of Team USA?

KB: You know, it might be a little cliché, but it is true. The thing I think about the most is that camaraderie that I developed with my teammates. I talk to Coach Hawkins all the time and he’s been just a great friend and mentor that I have gotten from that experience. My teammate, Luc Meacham who I also played with at Mount Union, I talk with him all the time.

Winning the gold medal and having my man Luc be on SportsCenter’s Top 10 was great. One of the coolest things though was seeing how proud everybody was after we had won. Guys draped in the American flag and just beaming with pride was something