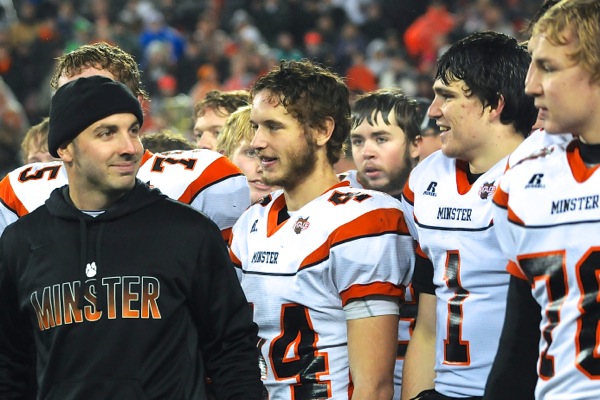 The guest on today’s Coach and Coordinator podcast is Geron Stokes, head coach of Minster High School (Ohio). Stokes is in his sixth season coaching the Wildcats. Minster is coming off winning the Ohio Division VII state championship last season. This is Minster’s second state championship in four seasons, as they won in Stokes’ second year at the helm in 2014. In five seasons, Stokes has compiled a 49-19 record as head coach at Minster, including four straight seasons of 10 or more wins.

Before coming to Minster, Stokes was the head coach at Urbana High School (Ohio) for four seasons. He held a 29-13 record with Urbana while leading them to three conference titles and two appearances in the Ohio state playoffs. He was also named District Coach of the Year during the 2012 season. Stokes was first hired as a head coach at Urbana, his alma mater, when he was 24 years old. He played quarterback in college and graduated from Wittenberg University in Ohio.

On today’s show, Stokes and host Keith Grabowski talk about how he sets up an efficient practice, getting his players to work hard and translating that to results on Friday nights.