A good mouthguard is important for a parent's peace of mind 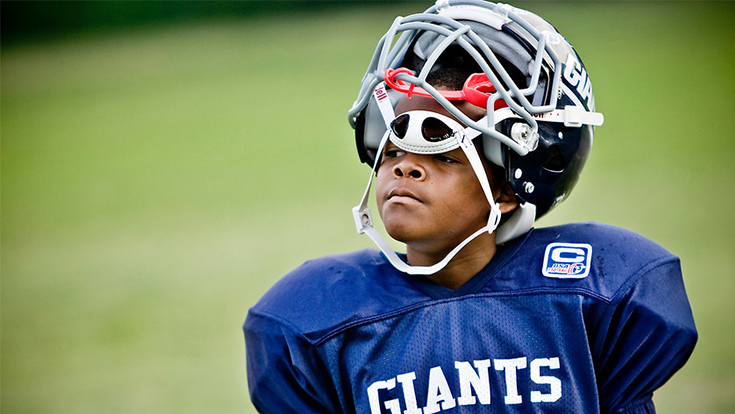 When it comes to equipment, many youth football programs provide players with almost everything he or she needs. They'll give a helmet, shoulder pads, jersey, pants and a mouthguard. There are times when a parent might decide to buy a better helmet or shoulder pads for their child rather than using the one the program provides. But the one piece of equipment that every family should upgrade is the mouthguard.

Typically when equipment is handed out, the coach or administrator will hand a child all of the necessary gear — including a mouthguard — that almost always comes in a plastic bag and made by a company that you’ve never heard of. What a parent should do before their child steps onto the field for any practice or game is to head straight for a sporting goods store and buy a name brand mouthpiece.

RELATED CONTENT: Coaches don't need to yell to be effective

For an extra $10-$30, it’s better for a parent to have peace of mind and to ensure their child’s teeth and surrounding area are protected as best as possible.

“The mouthguards that typically are handed out from those programs are inexpensive and that’s why they’re handed out because at least they’re something (to satisfy) the rules,” said Jay Turkbas, Senior Vice-President of Product Development for Shock Doctor, the official mouthguard of USA Football.

“The limitation on the plastic bag, single dollar mouthguards is that they’re one material … boil and bite and they typically are not a very tight fit once they’re bit.”

A quality mouthguard, like Shock Doctor, has good retention and will stay in place to allow a player to open his or her mouth and breathe. If a mouthguard is not in the right position when contact occurs, it won’t help to protect the teeth because it won’t be in place.

RELATED CONTENT: Why organization is key to a successful youth football league

Many of the inexpensive mouthguards will never fit well because they are made with one material. With that in mind, an investment in a dual material or three material mouthguards is the way to go. Better mouthguards have a protective shell with a soft gel lining that will keep the mouthguard’s integrity intact while the dollar or plastic bag mouthguards tend to expand and have no compression.

“You get a better fit (with a better mouthguard) because you have that external frame that creates a stable framework within the soft gel that can form and then cool,” said Turkbas. “The second component is that most of these mouthguards that are handed out have a permanent tether.”

With retention and better fit in mind, an upgrade from the dollar plastic bag mouthguard to a product like Shock Doctor’s Gel Max is an affordable way to give your child better protection.

“It’s sort of the go-to based on its price, its protection, its fit, all the way around,” said Turkbas. “It’s a great choice for a lot of athletes for a lot of different sports. In 2002 or 2003, I told my boss at the time that this is the best $20 mouthguard for $9.99 that I’ve ever seen. I think that’s one of the key reasons for success for Shock Doctor over the years is that the Gel Max has been such a strong value and performer.”

Gel Max is a three-material mouthguard that features a lot of protective surface and shape. It’s softer so some kids may tend to chew on it and eventually the mouthguard will degrade. On that note, there is also the Gel Max Power that is also made from three materials and has a lower profile with a tighter fit. It’s also tougher to chew so you get more longevity.

RELATED CONTENT: Rogersville (Tennessee) middle school proved they were in it to win a Riddell Smarter Football grant

Parents may also want to consider a new mouthguard from Shock Doctor called “SuperFit” which includes a temperature strip that is used in the softening process. This product retails for $19.99 and features less gel along with a completely different outer frame that softens at a much lower temperature.

“You could literally put it in a hot cup of coffee and in thirty seconds, it would soften,” said Turkbas. “It stays soft for a while, so you have a lot more time to press and fit and allow it to cool in your mouth for almost two plus minutes. And then it tightens and tightens and tightens even more.”

The SuperFit does not have a tether which makes it a perfect option for a flag football player since there isn’t a helmet involved.

When it comes to buying a better mouthpiece for your child, parents should definitely do their homework. But it’s also reassuring to know that if you pick up a Shock Doctor mouthguard in your local sporting goods store, you will see the USA Football logo on the package. Having an affiliation with the governing body for football in the United States has been great for Shock Doctor.

“It’s been important in the sense that they’re kind of a unifying ruling body,” said Turkbas. “It’s good that there’s an affiliation. It’s been a positive.”

It’s a positive for any parent to make sure their child is as safe as possible when on the football field. It’s important to ensure your child is wearing the safest equipment. And an affordable way of providing an upgrade for your child is to purchase a better mouthguard that has better retention and a better fit than the one the program provides.