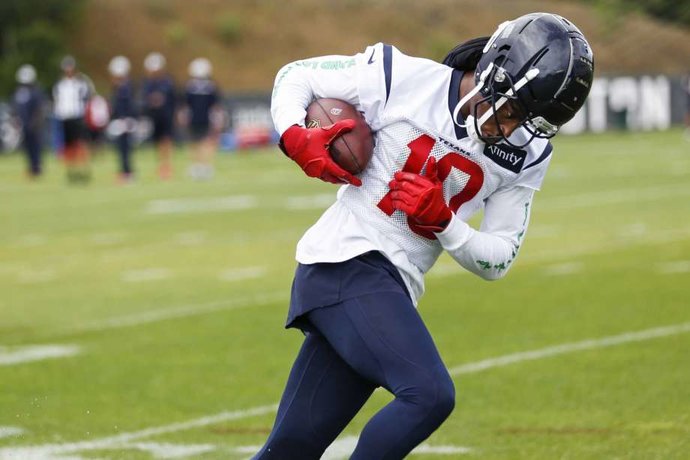 The essence of great route running lies in a player’s ability to adjust his route to win vs. any coverage. The finished product is a combination of practiced techniques that a receiver uses at the exact right time to attack the defense; but before he can execute these techniques, he must first be able to diagnose what’s in front of him and create a plan. At most levels of high school football and below, the “elite” players are able to make plays due to a pure athletic advantage. Yet an incredible number of 4 and 5 star recruits and high school stand outs fail to find the same success in college football. Why is that?

It could be for a number of reasons, but a common reason why players fail to translate their athletic abilities to success at the highest levels of football is because the game becomes much more cerebral in college and professional football. When everyone on the field is a great athlete, players must separate themselves with great technique and an even better understanding of how to execute their job under any circumstance. For a wide receiver, the ability to recognize defensive coverages is essential to his ability to execute his job at the highest level.

Learning about defensive alignments & coverage shells can seem like a daunting task for players and even for many coaches, especially if they have never played or coached on the defensive side of the ball. For wide receivers, it’s important to start small, by understanding what to look for among the players standing in front of them and how their job is affected by what they see. Often times the only player on the field that affects a wide receiver’s job is the player directly over him, so the conversation about how to understand the defense should start around that player. However, wide receivers must also use additional defenders as indicators to help predict what will occur after the snap.

With only a few seconds between the time a receiver lines up to the time the ball is snapped, it is important to be efficient when scanning a defense to gain pre-snap information. Therefore, the best way for a receiver to recognize coverages is by focusing his time identifying a “coverage triangle,” which is relationship between the cornerback, safety & linebacker closest to him. 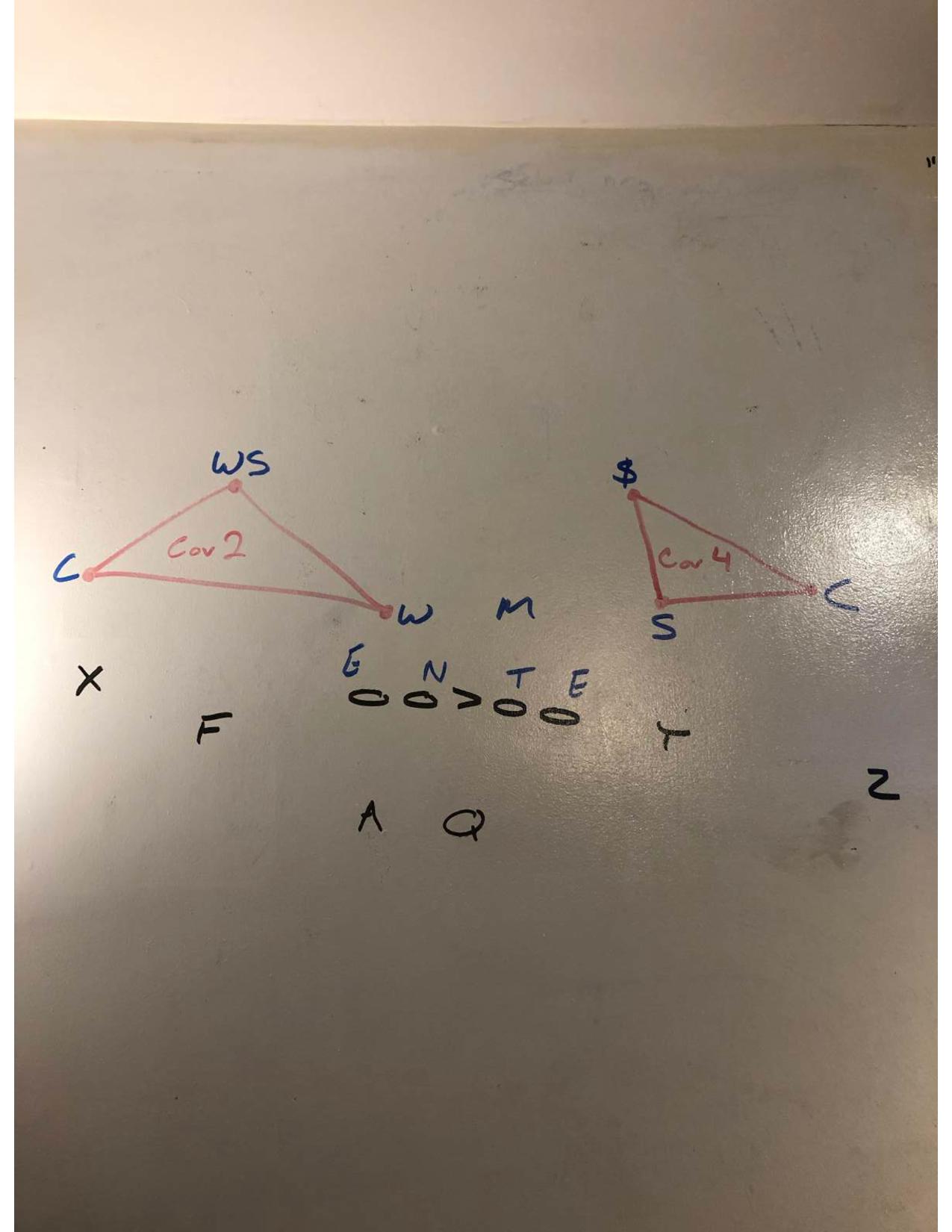 Here is how I introduce the coverage triangle to a position room:

On most plays, it is not important for a receiver to decipher between Cover 3 or Cover 4 or some sort of combo coverage in the same way it is for a coach or a quarterback (although most veteran receivers can develop a great understanding of coverage). The defenders in front of the receiver can provide all the answers he needs to execute his job. Often times, slot receivers only need to know if there is one high safety or two high safeties in the coverage and the answer to that question will tell him what to expect from the linebacker based on situational film study.

On many plays, an outside receiver’s job consists of a 1 on 1 match up against the cornerback, thus beating him is often the receiver’s top concern. However, the near safety is the player that can best tell him what to expect from the cornerback, along with the location of the outside linebacker. Savvy cornerbacks are able to vary their depth and alignment before the snap, taking away indicators from the receiver, but “the safety has the keys to the test.”

When running a hitch route for example, the only factor that can affect the outside receiver’s route is the technique of the cornerback. If it’s loose or bail coverage, the hitch stays on, if it’s press coverage or cover 2, it converts to a fade. The receiver should gather information from his coverage triangle with the sole purpose of answering that question and nothing more. Operating under this mindset helps to simplify the game for the player and allows him to think efficiently before the ball is snapped because he is only concerning himself with what matters. Rather than thinking to himself, “is this Cover 4 or Cover 6 or Cover 2 and why?” he can ask himself more decisive questions. “Is the cornerback off by 5 yards or more with inside leverage?” and then work backwards. The corner could easily change his depth, so the receiver must also look at the alignment of the safety and outside linebacker closest to him as key indicators. The receiver should have an idea of the defense’s tendencies and top coverages based on film study, so the key indicators are often just to confirm a look that he is already expecting or telling a different story.

“Where is the safety located?”

For example, based on film study the receiver knows that when the near safety is aligned well inside the hash and the cornerback is off, then it is most likely some sort of 1 high, zone coverage and the cornerback will remain off.

However, film study also tells him that if the safety starts to creep outside the hash and the cornerback moves to outside leverage, there is a possibility for the corner to tighten down and play cloud coverage in a Cover 2 defense, which could change his responsibilities drastically. To complete the puzzle, the receiver should ask himself:

“How wide is the outside linebacker?

If the cornerback is going to stay in loose coverage, then the outside linebacker would have to be the flat defender, which means he is required to align wider than usual to allow himself to buzz out to the flat right away. If it is Cover 2 where the cornerback is the flat defender, then the outside linebacker will be aligned tighter to the box as his job is to wall play the hook to curl area and wall off any receiver trying to run inside of him. 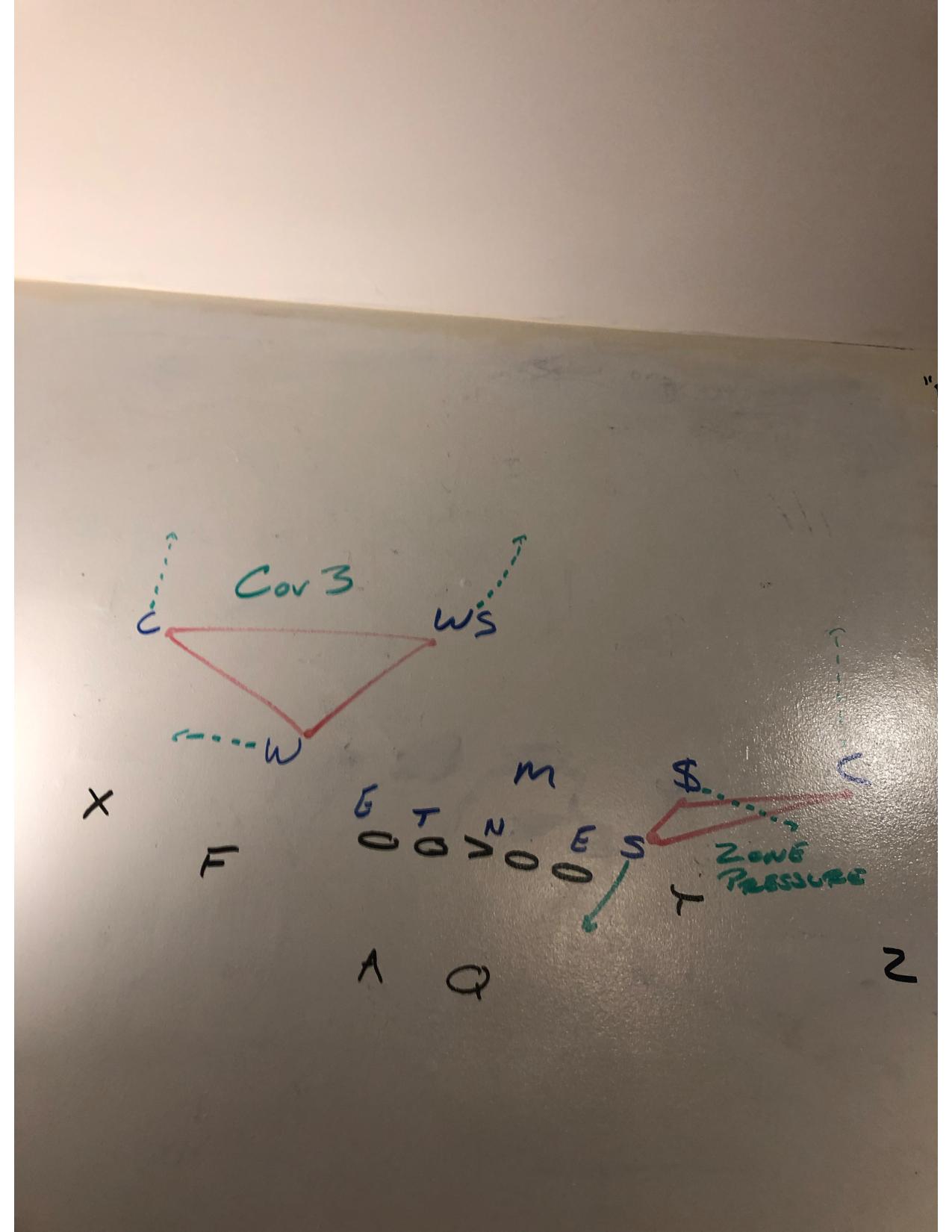 By teaching wide receivers how these three defenders play off of each other and why they align with certain depths and leverages, the task of “coverage recognition” can become much simpler. Young receivers can easily learn to identify the key indicators of their coverage triangle and predict how those players will move after the snap in order to play fast in game situations while making the right adjustments.