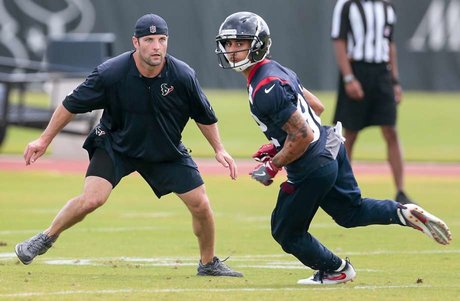 The hitch route: considered by many coaches and players to be the “easiest” route to complete in football. It also a staple of many high school and college spread offense systems and cannot be taken for granted. When a hitch is called, the goal is to gain “free yardage” by taking advantage of the vacant outside flat area that the defense gives up when they play loose coverage.

The hitch is similar to a free throw in basketball – the best players and teams are able to take advantage of these “free” opportunities rather effortlessly, but that only comes as a result of taking pride in practicing these simple scenarios over and over again seeking to execute at a level close to perfection.

From the wide receiver’s perspective, his goal on a hitch route is to sell as if he is running a vertical route until the very last second before breaking down suddenly and efficiently and presenting his numbers to the quarterback ready to attack the ball in the air and gain additional yardage after the catch. The goal of this article is to address exactly how the receiver should break down suddenly with the most efficiency possible.

“Everything is a fade until it’s not.” That’s the mindset outside receivers must have when running quick game routes. Everything in their body should be selling vertical until the very last second.

The footwork for a hitch route is “Drop Pop on the 2nd inside step.” The receiver should start with his inside foot up and push vertical with a low pad level, while really trying hard to open up his stride to threaten the cornerback’s cushion and loosen him further. When his second inside step hits the ground, he wants to buckle his knee, sink his hips and “drop” his weight to slow himself down and then immediately “pop” his outside foot in the ground to stop himself completely. “Drop in the direction you want to go, pop violently on your outside foot.”

The receiver should present his numbers to the quarterback and hold his ground. He does not want to come out of this break running back to the quarterback. If the ball is thrown on time, it should be right on him when the receiver turns around, plus he does not want to run inside and compromise and horizontal spacing that the route concept is looking to create. If the ball is thrown late, the receiver should be encouraged to “circle back” and attack the ball once it is already in the air in an effort to beat the defensive back to the ball and attack it aggressively, but only after the ball is thrown, not before.

The receiver wants to attack this breakpoint full speed and really trust his feet. An accumulation of reps is required before the receiver becomes familiar with the body mechanics of running through his break and stopping suddenly with a low pad level. At this point the receiver should be gaining 6+ yards on his hitch route and stopping rather effortlessly. Depth, tempo, pad level should feel the same on just about every rep so that the quarterback can develop his own comfortable and consistent rhythm to throw the ball to the receiver on time.

The “drop pop” lies at the foundation of most great breakpoints. For a receiver this is the essence of his ability to run through his break, sink his weight and stop himself on a dime or shift his momentum suddenly before a defender can react. Mastering the nuances of the “drop pop” breakpoints and specifically the hitch route will create a great foundation of fundamentals that carry over to other routes as well.

While selling vertical and running quick game routes with the mentality that “everything is a fade until it’s not,” the receiver should not feel pressure to run at 100 miles per hour, but his body language must give off the appearance that he is running at full speed to the cornerback. The first way to do that is to keep a low pad level throughout the breakpoint and play “low to lower” off the ball. Meaning that the receiver should start in a low athletic stance and play with an even lower pad level once the ball is snapped.

A major indicator that tells defensive backs to jump the hitch route is when the receiver’s pads raise up before he breaks or when he turns his head to look for the ball too early. The last thing out of the receiver’s break should be his eyes, this applies for the “drop pop” and all other breakpoints as well. Receivers want to keep their head down, finish the break with their chest over toes and then show their eyes after the breakpoint is completed.

The most common application for the “drop pop” breakpoint is for a hitch route, which is “drop pop on the 2nd inside step” and should push the receiver’s depth to about 6 yards. Many offenses will also stop routes, which can be used as a manufactured back shoulder fade that is great for beating press coverage or just a deeper hitch vs. very loose coverage. Stop routes are run with a “drop pop on the 3rd inside step,” which will push the receiver’s depth to about 9 yards. There are some pro-style offensive systems that will run a stop as deep as 12 yards, which would be “drop pop on the 4th inside step.” On the 3rd inside step and 4th inside step routes, it’s nearly impossible to finish a clean “drop pop” with no additional gather steps on a route with that much depth, but the receiver should just try to be as efficient as possible and expect the ball on his outside shoulder right out of his break.