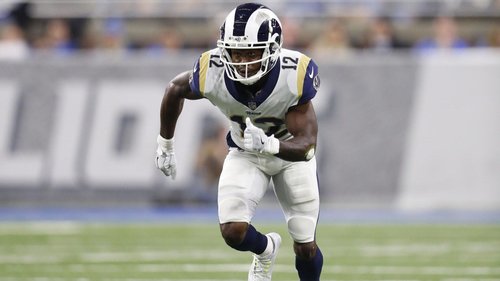 A truly great route runner has the ability to adjust his route to any coverage or any alignment he sees from a defender. To do this, he must have the proper tools at his disposal (a collection of practiced techniques) and also a great understanding of when to deploy these techniques to get himself open.

The “Speed Drop” break point is so useful because it allows the receiver to change direction & break at a 90-degree angle rather instantly anywhere from 10 to 20 yards downfield. Once the receiver is comfortable with the footwork – this is also a break point that gives him the freedom to pair it with change of speed, hand combat or a violent hip shift, providing the receiver with tools to win vs. any look he sees.

The Speed Drop is used on in or out breaking routes 10 yards or deeper. Once the receiver runs further than about 8 yards, he has too much momentum to run a Square Break (Drop, Break, Line) and needs an extra step to get in and out of his break. The Speed Drop footwork is “Drop, Break, Drive, Line,” which essentially makes it the combination of the Square Break & Speed Cut breakpoints – both of which have been discussed in this series.

“Drop in the direction you want to go, Break to violently change directions, Drive around the corner (the receiver can take one and a half to two yards to round the corner), snap your Line foot in the ground to get friendly, running on a line right now!” The receiver must think of this breakpoint as a four-step breakpoint to prevent themselves from drifting. Many wideouts will want to show their eyes after the “Drop” & “Break” steps and then find themselves drifting downfield rather than finishing the break and snapping the route off to become friendly at the top. “The last thing out of the receiver’s break should be his eyes!” In the case of the Speed Drop – it is important that the receiver understands that his break is not finished until he snaps that final “Line” step in the ground, then he can show his eyes and find the football!

Another great coaching point that will help the receiver stay flat at the top of a Speed Drop is to pump his arms throughout the cut and use his upper body to pull himself friendly. He wants to throw his body into the break, trust his feet and use his arms bring pull his body through the cut. This will also help him maintain body control with his chest over his toes.

Once the receiver has mastered the basic footwork of a Speed Drop – he can start to add different tools that will help him gain separation vs. man defenders and different coverages. The “In-Set” requires the receiver to add a violent hip shift to this breakpoint during the “Drop” & “Break” steps. It is a slight loss of speed to maintain body control and a violent change of direction to gain separation. Most often the In-Set is used vs. a trailing man to man defender who is in the direction that the receiver wants to go. In this situation, if the receiver executed a regular Speed Drop, the defender would run right into him. To beat a defender in this situation, the receiver wants to slow his tempo slightly at the top, let the defender close the space on him and then use his “Drop” step to push off and violently shift his hips in the opposite direction. The defender should have his eyes on the receiver’s hips and will jump that way, which allows the receiver to then “Break, Drive, Line” over the top of the defender and gain separation. This can also be used vs. a defender that is above the receiver at the top and flat footed, like a cover 4 safety vs. a slot receiver or a loose corner back vs. an outside receiver. A subtle, violent hip shift in the opposite direction of where the route will end up allows the receiver to maintain his efficiency, while also adding some “shake” at the top.

Against a man to man defender that is at an even level with the receiver or even slightly above, but still in chase mode, an “in-set” is less effective because the DB is less likely to have his eyes on the receiver’s hips. In this case, the receiver can pair the Speed Drop with a violent “Throw-By” to push the defender upfield and use his momentum against him. In this situation, it is important for the receiver to close the space between him and the defender so that he is in position to use a powerful throw-by and isn’t forced to over extend and reach for it. Closing the space makes the throw-by more sudden & subtle, which will help prevent any offensive pass interference calls, but also makes it a more powerful weapon. The receiver wants to aim for the defender’s elbow if his hands are already attached to the receiver to get his hands off or aim for the defender’s lower back if he’s running side by side to the receiver.

An efficient Speed Drop combined with some of these other separation techniques can give the receiver the ability to win in just about any situation.