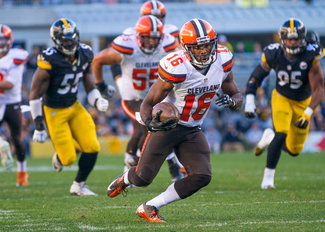 The “Square Break” is designed to allow a receiver to change direction at a sharp, 90-degree angle on any in or out breaking route under 10 yards. “Drop, break, line” is the three-step footwork pattern that will become rhythmic and second nature to the receiver over time.

Similar to the “Drop, Pop” breakpoint and any breakpoint where the receiver is sinking their hips to gain control, the receiver must drop in the direction he wants to go. If he’s running a 5-yard “In” route, the “drop” step should come on his inside foot, where he will sink his hips to gather himself and gain body control. In systems where the receivers run their routes off steps, a 5-yard “In” route would be a Square Break on his second inside step.

In most Square Break situations, the receiver wants to push vertical with the mentality that “everything is a fade until it’s not” and do everything he can to loosen the defender’s cushion. When his second inside foot hits the ground, the receiver wants to drop his weight on that foot to slow himself and immediately stick his “Break” foot in the ground to change direction.

The purpose of the “Break” step is to violently change direction at a sharp angle, so there shouldn’t be anything passive about this movement. The receiver wants to turn his break foot at a 45-degree angle so that he can more easily open his hips and run down the line at a sharp, 90-degree angle.

The first two, “Drop, Break” steps in a Square Break should feel the same as a “Drop, Pop” breakpoint used on a hitch. Except instead of popping up to a stationary position, the receiver is breaking to change direction violently. He wants to drive his “Line” foot in the ground as soon as possible so he can get running across the field. “Line” tells the receiver that he is flat and friendly on a line right now. The receiver should feel a sense of urgency to get that step in the ground so that he can change direction. The longer he’s hanging on that “Break” step, the longer he’s not going anywhere.

Ideally, the receiver should aim to extend this Line step across the field and avoid stepping underneath himself so that he is able to gain ground as soon as he starts running with his Line step in the ground. If that step is directly underneath himself, the receiver will not go anywhere until he takes another step, which is wasted movement and gives the defender an opportunity to recover and make a play.

The cone drill shown above is a great sequence to get the receiver’s body into the rhythm of being aggressive throughout the breakpoint. Push your depth on the hitch two or three times in a row. Then execute the Square Break with the same aggression and efficiency. Once the footwork has become second nature, the receiver can start to practice man-beating techniques to finish this drill as shown in the video.

“The last thing out of the receiver’s break is his eyes.” This statement applies for every breakpoint. The receiver should always finish his break with his chest over his toes and body aligned and then show his eyes. Showing his eyes too early makes the receiver prone to slipping or false stepping as his head is going one way while his lower body is still going another.

Often, when a receiver is running a quick game Square Break route vs. contested man coverage, he is required to put more flavor in his route and won’t win by “running paper routes.” Meaning, avoid running the route simply by the way it’s drawn on paper in the playbook. Man-to-man situations require change of speed, proper angles and violent hip shift to win during the “Drop” and “Break” steps.

A Stick route (5-7 yard out breaking route) often becomes the receiver’s best open field crossover in man-to-man situations. Before a receiver can win consistently under these circumstances, however, he must first master the basics of the breakpoint and accumulate enough reps that it becomes second nature.