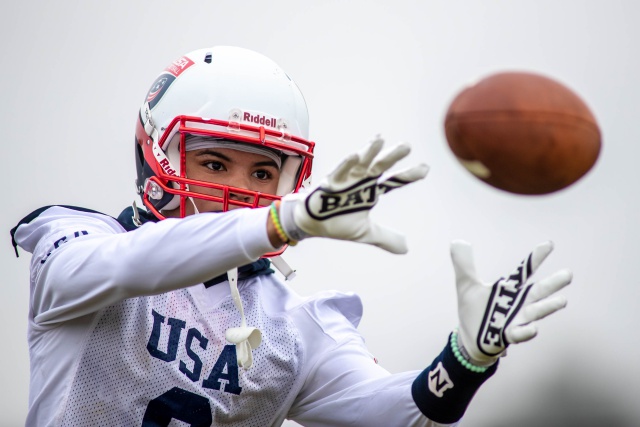 As discussed in last week’s article, teaching press releases can be difficult because the coach can’t predict how to defender is going to react on each play. Thus, rather than teach specific movements that only apply to specific situations, it is better to give the players rules and concepts to live by that can apply to all press releases and the specific footwork and movements at the line of scrimmage will come after the player understands the broader commandments that he must follow on each rep.

2) Have a Counter Plan

These are some broader concepts that apply to every good press release and once the players have grasped these completely, they can start to think more specifically some of the physical qualities of a great press release:

If someone was told to push a car up a giant hill, would he do so with his feet parallel or his feet staggered? His feet would be staggered because he has better balance, can create leverage and generate more power from that position. When releasing at the line of scrimmage, a receiver wants to keep his feet staggered for similar reasons - to maintain a powerful base that will allow him to withstand any hand combat from the corner back. More importantly, receivers want to keep their feet staggered at the line of scrimmage because doing so allows them to step directly vertical after moving the DB off his mark. When a receiver’s feet come parallel, he must step out and around the DB, which is less efficient and can give the DB an opportunity to recover on the play.

Stefon Diggs and Davante Adams are two of the best receivers in the world when it comes to beating press coverage and they often relate their release moves to “playing basketball at the line of scrimmage.” There are a lot of similarities between great route running in football and great ball handling in basketball. A coaching phrase that often resonates with players who are familiar with basketball is “use your best open field crossover!” This phrase often empowers the receiver to focus more on winning and crossing the DB over and less on being in a rush to get out of the release. A practical way to improve a player’s shiftiness at the line of scrimmage and basketball type mentality is to encourage the receiver to play on his

insteps. Rather than making cross over moves up on his toes, he wants to push off the inside part of his foot (insteps) with his knee inside his ankle. Doing so will instigate a violent hip-shift and create that cross over type effect at the line of scrimmage or even at the top of routes. “The Duck Walk” is a great warm up exercise that will help to loosen a player’s hips and create a more violent hip-shift in routes and releases.

Come off the ball “Low to Lower”

Nothing good athletically ever happens from standing up straight. Players need to have a low athletic base in order to maintain quickness & explosion in anything they do on a football field. An expression that helps remind receivers to keep a low pad level is “low to lower” – start in a low athletic stance and play with an even lower pad level once the ball is snapped. This encourages players to really commit to their release moves at the line of scrimmage by throwing their body into their jab steps rather than toe tapping.

Similar to the conversation about the receiver keeping his feet staggered, he also wants to avoid hopping because he loses all power when both feet leave the ground. If a receiver hops off the ground during a release and the defender puts hands on him, the receiver has no ability to withstand the contact and loses all power. He also has no ability to suddenly change direction if both feet leave the ground. As a receiver is getting comfortable at the line of scrimmage, he wants to think about moving one foot at a time, very deliberately and then slowly start to make each step more violent as he begins to trust his feet more and more over time.

Hand combat is an essential part of winning at the line of scrimmage but is being talked about last for a reason. Receivers want to learn how to win at the line with their feet first. Too any young receivers toe tap at the line of scrimmage, don’t give any violent steps to move the DB and then rely on long violent hand swings to knock the DB off. It is essential to move the DB off his mark first and then when a DB is off balance, he will shoot his hands to stay in phase and it is at this point that hand combat becomes most effective. 99% of the time when a DB shoots his hands, he will also stop his feet, so when a receiver is ready with violent & efficient hand combat at that perfect moment, he gives himself a great chance to gain separation. Receivers want to think of themselves as counter punchers. Move the DB off his mark and be ready to respond with violent hand combat when the DB shoots his hands.