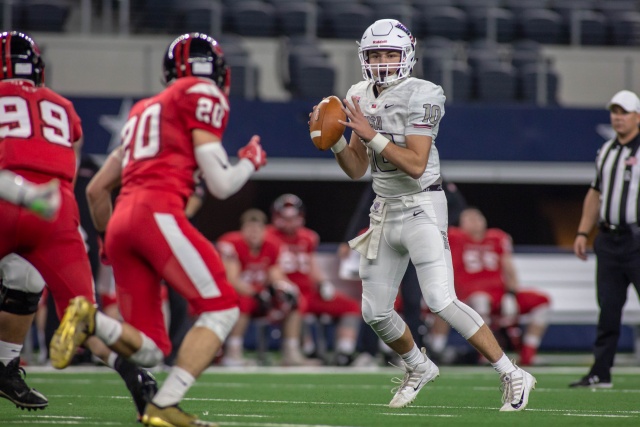 Wide receiver culture is different from any other because of the inherent nature that the game is often out of the receiver’s hands until the ball is physically in their hands. In other words, wide receivers have the least amount of individual control on the flow of the game on a snap by snap basis. So many different things must go right for a receiver to make a major impact.

In the pass game, the coach must call a play to target the receivers, the offensive line and running backs must hold up long enough in protection for the quarterback to deliver the ball, the quarterback must make the correct read, the complimentary routes must work to create space for the receiver to get open and then after all that, the quarterback must deliver a catchable pass. Anyone who has ever played or coached wide receivers know that a receiver group could be running open all game but fail to have a major impact if play calling, pass protection and quarterback play falter at any point.

Even in the run game, the receivers are blocking the last line of defense, which means that the ball carrier must make it through the first and second levels of the defense before a wide receiver’s block even matters on most plays. This isn’t to make excuses for wide receivers or serve to discourage them. However, it is valuable insight that helps explain why wide receivers are often labeled as “selfish,” “lazy,” “divas”, etc. In many ways, it is human nature to become those things when someone is doing their job with maximum effort for long periods of time with no direct reward. Again – this is not to make excuses for that behavior, it’s just important to keep in mind when building a culture within a wide receiver position room.

Let’s first define culture in general. Culture = Accountability + Love. Every young man wants to be held accountable and wants to be pushed beyond his limits, no matter how much he resists. All humans have an innate desire to feel as though they are improving and making progress towards a larger goal. There must be standards and expectations that are set from day one and appropriate consequences for those who fail to meet those expectations that are enforced from day one.

Accountability is the foundation of any great culture; love is what allows the culture to continue to grow and improve. Love is also understanding – the willingness to listen and understand where the other person is coming from. This is especially important for wide receivers because it is important to understand the nature of their role in a typical offense. More often than not, a wide receiver can do his job perfectly, yet receive no tangible reward for doing so. Therefore, a wide receiver culture must be built to give the players something to rally around on a consistent basis outside of receptions, yards and touchdowns. 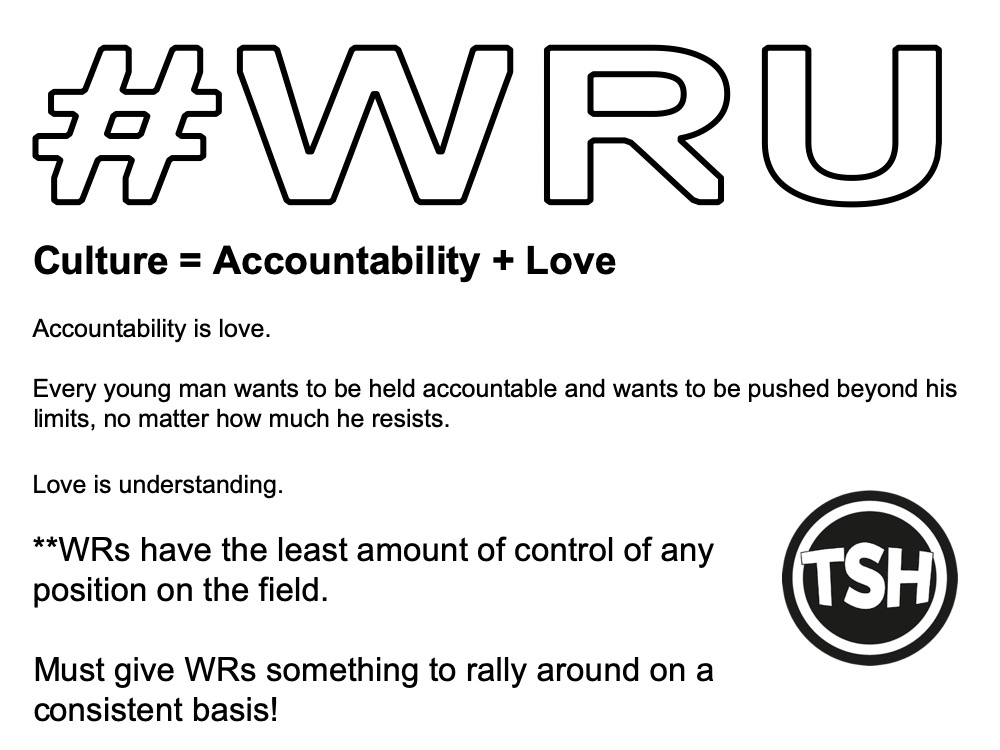 These rallying points must be celebrated at all times during practice and meetings to create a constant excitement around “doing your job,” whether it results in an impact play or not.

First rallying point: Toughness. In our #WRU culture that has been established over the last 5 years with high school, college and NFL players, we define toughness as “the ability to consistently show up to do your job with a great attitude and great effort.” Meaning that toughness is defined by one’s attitude and effort. For people who are not tough, it is very difficult to maintain a positive attitude and high effort when things aren’t going their way. Those who are able to fight through adversity are able to do so because they maintain a positive mindset and determined work ethic. 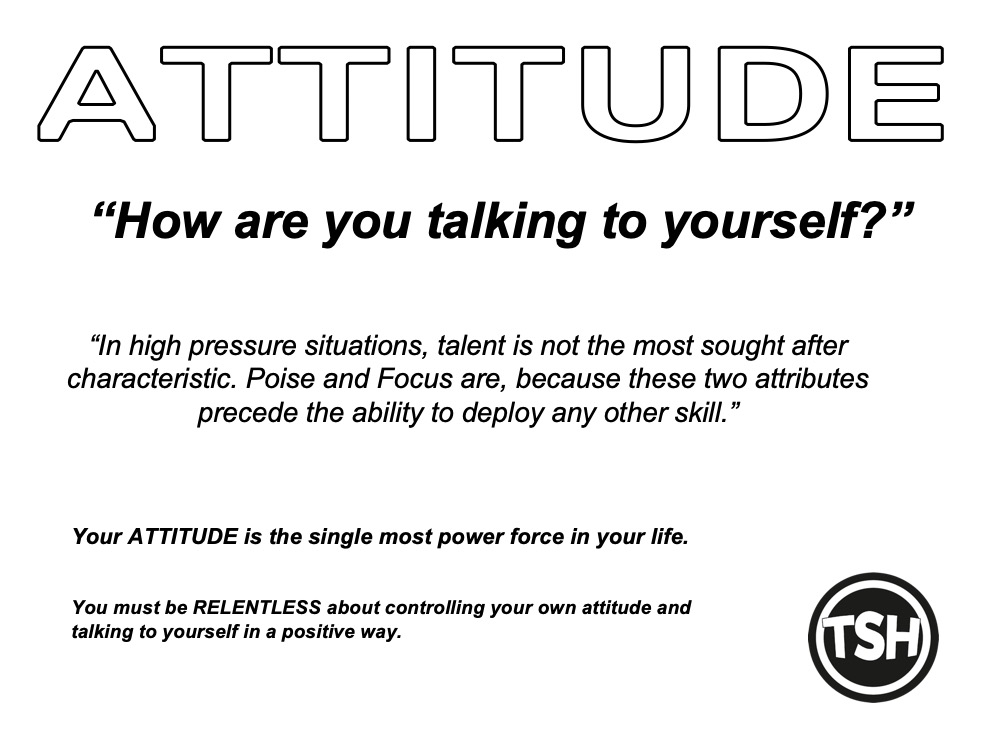 The last rallying point around toughness is finish. The way a player finishes each rep in practice and each play during the game is a direct reflection of his character and commitment to his team. The way an individual is willing to finish is not just a reflection on him, it is a display of commitment that eliminates excuses from everyone else around him. If the wide receivers can finish and play harder than every position group on the field, what excuse does anyone else have for not matching or exceeding their effort? 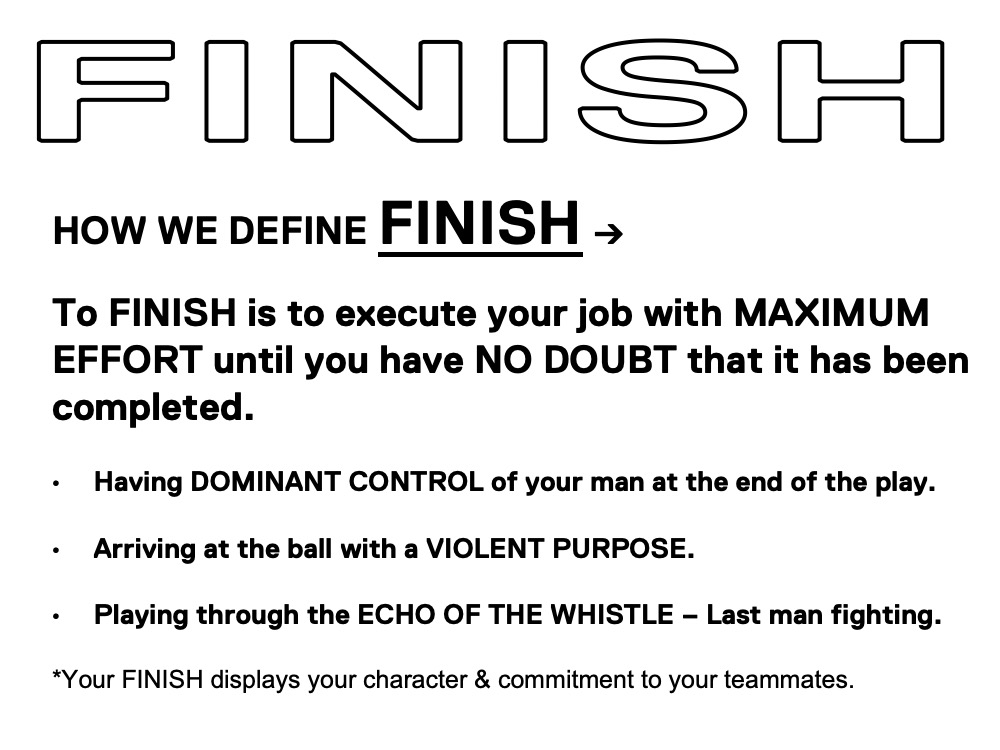 After toughness, the next major rallying point is leadership. Once a player proves that he can consistently come to work each day with a great attitude and give great effort, he inherits the responsibility of holding the rest of his teammates to the same standards and expectations. True leadership is using one’s own work ethic to set an example for those around him and then demanding that his teammates work with the same tenacity and focus that he embodies. Wide receivers may not be able to control their direct involvement in the game, but they can control the energy they bring to the team teach day and they can take pride in uplifting their teammates to match their energy and effort on a daily basis. 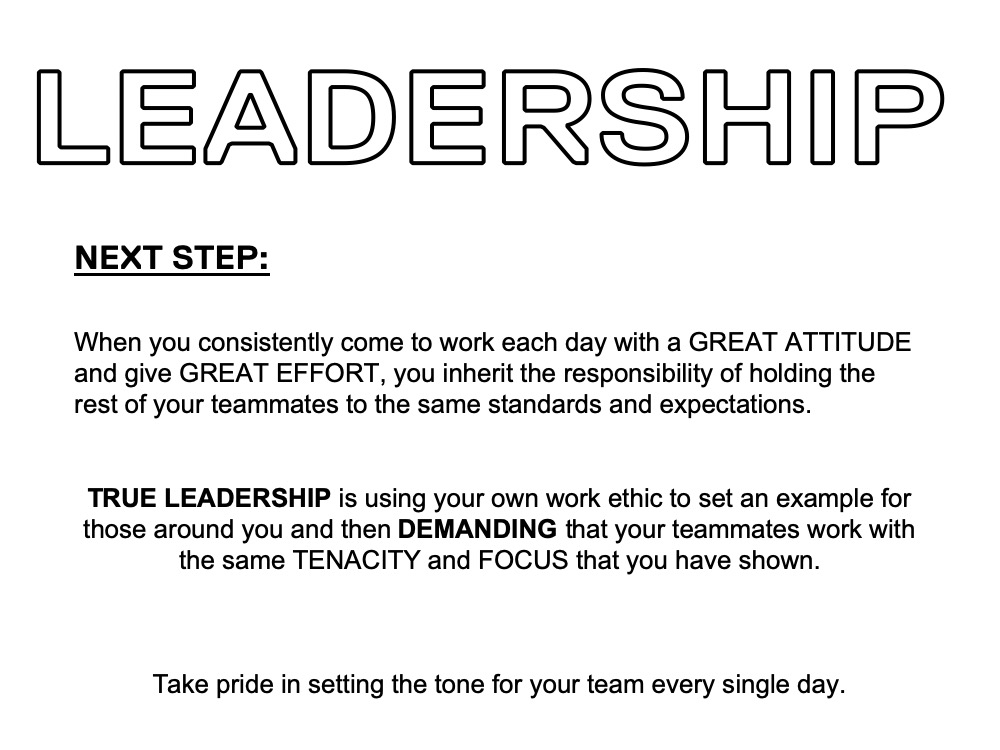 The last rallying point for an effective wide receiver culture is “The Craft” or in other words, the technique of the position. It is absolutely essential that wide receiver coaches are obsessive about all the little details that the technique of the wide receiver position entails. From release footwork, to breakpoints, to separation technique, to catching mechanics, etc. When the details of the craft are performed correctly, they must be celebrated within the position room, even if they don’t result in a big time play for the team. If these technique details are only celebrated when they result in completions or touchdowns, then the players will define their value strictly based off of completions and touchdowns and thus are more likely to become “selfish, lazy or divas” when they aren’t getting the ball. 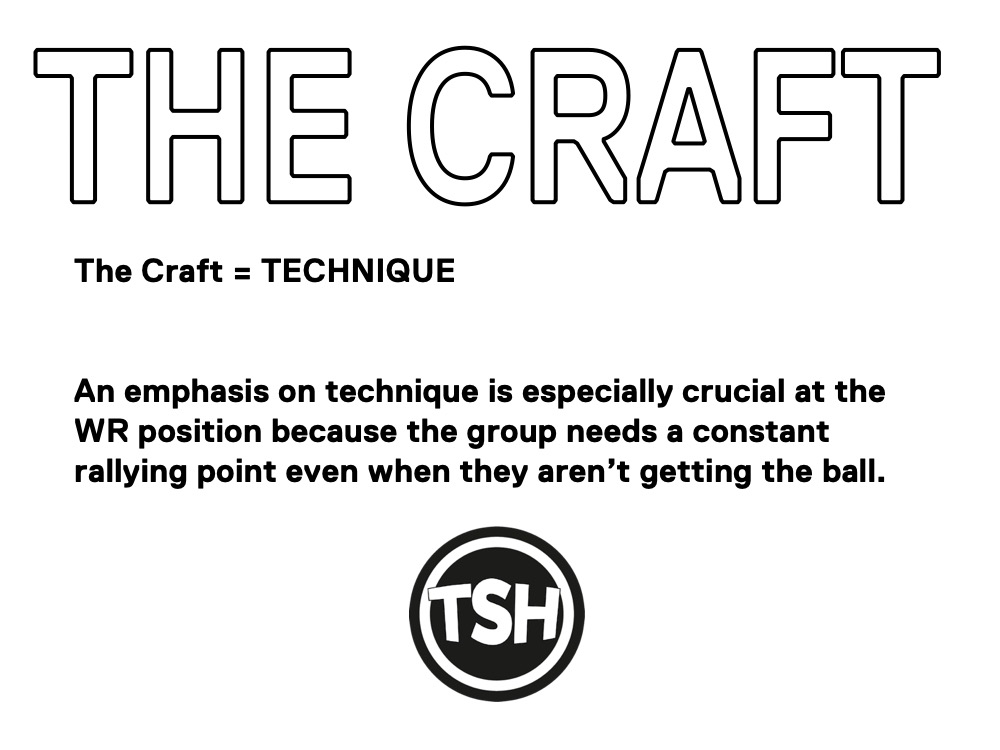 As a wide receiver coach, it is essential to celebrate toughness, celebrate leadership and especially celebrate the details of the craft on a daily basis. If this culture is established early, then the receivers will be playing the game for the right reasons and catches, yards and touchdowns will just be an added bonus to the thrill of embodying a culture larger than themselves. 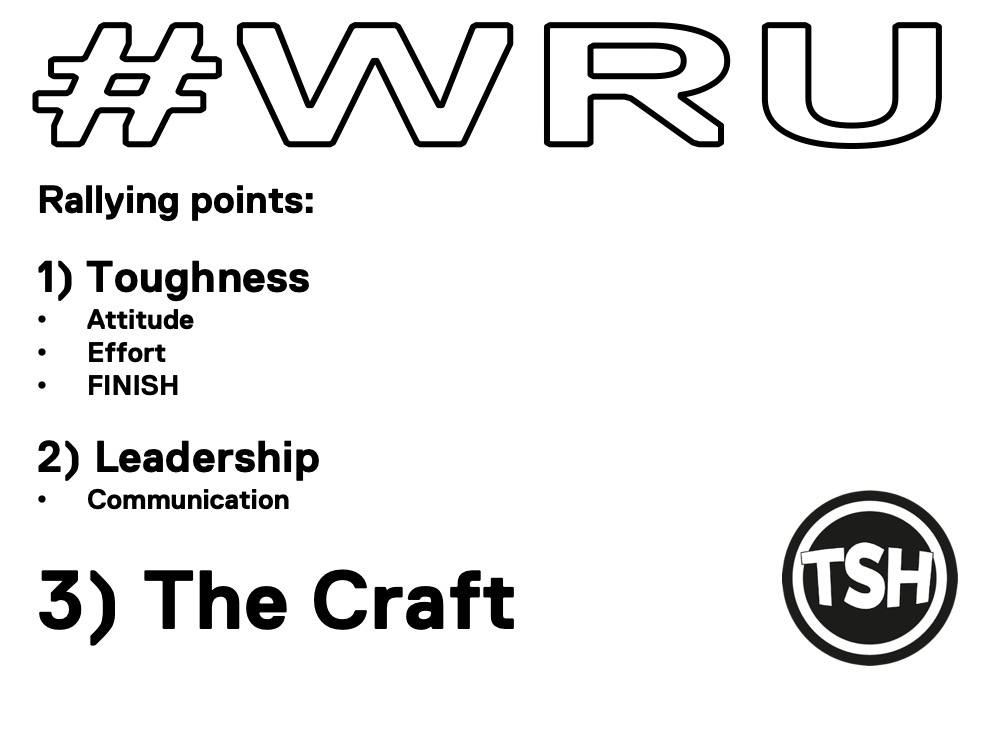