Learn How NFL Offenses Use Multiple Motions to Attack Defenses 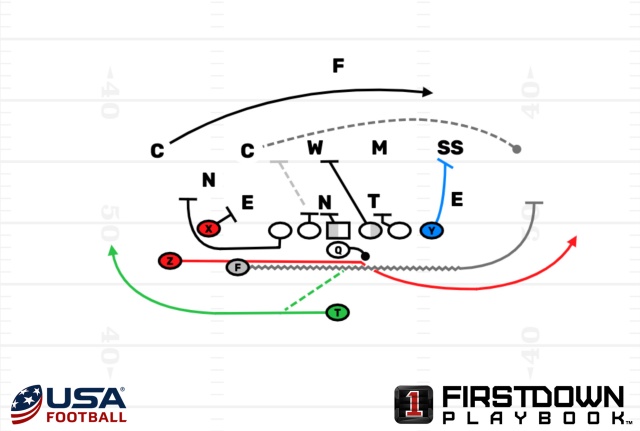 A creative way to attack defenses is through the use of multiple motions/shifts.  Motions/shifts can give the quarterback a zone/man tell while also allowing the offense to outflank the defense improve blocking angles. Today, we look at six concepts NFL teams paired with multiple motions during the 2018 season. 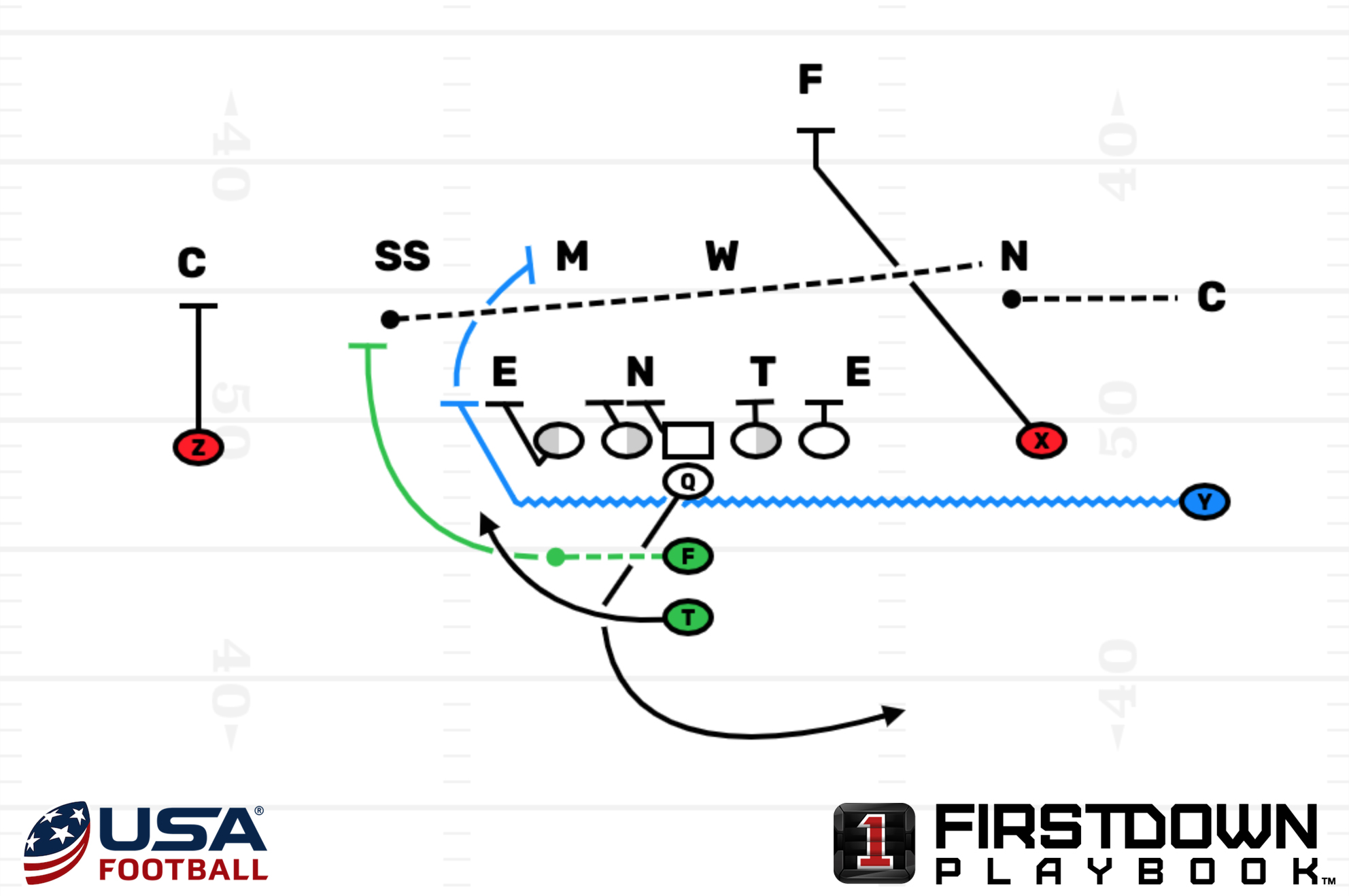 The offense lines up in a 2x1 set with a fullback and tailback in the I and the tight end wide to the right. The tight end motions across the formation and aligns as a wing outside the left tackle. The fullback motions to the left and as he gets behind the left tackle, the ball is snapped. The play is outside zone.

The offensive line, tight end and fullback all execute, but the unblocked strong safety makes the tackle to limit the gain to 4 yards. 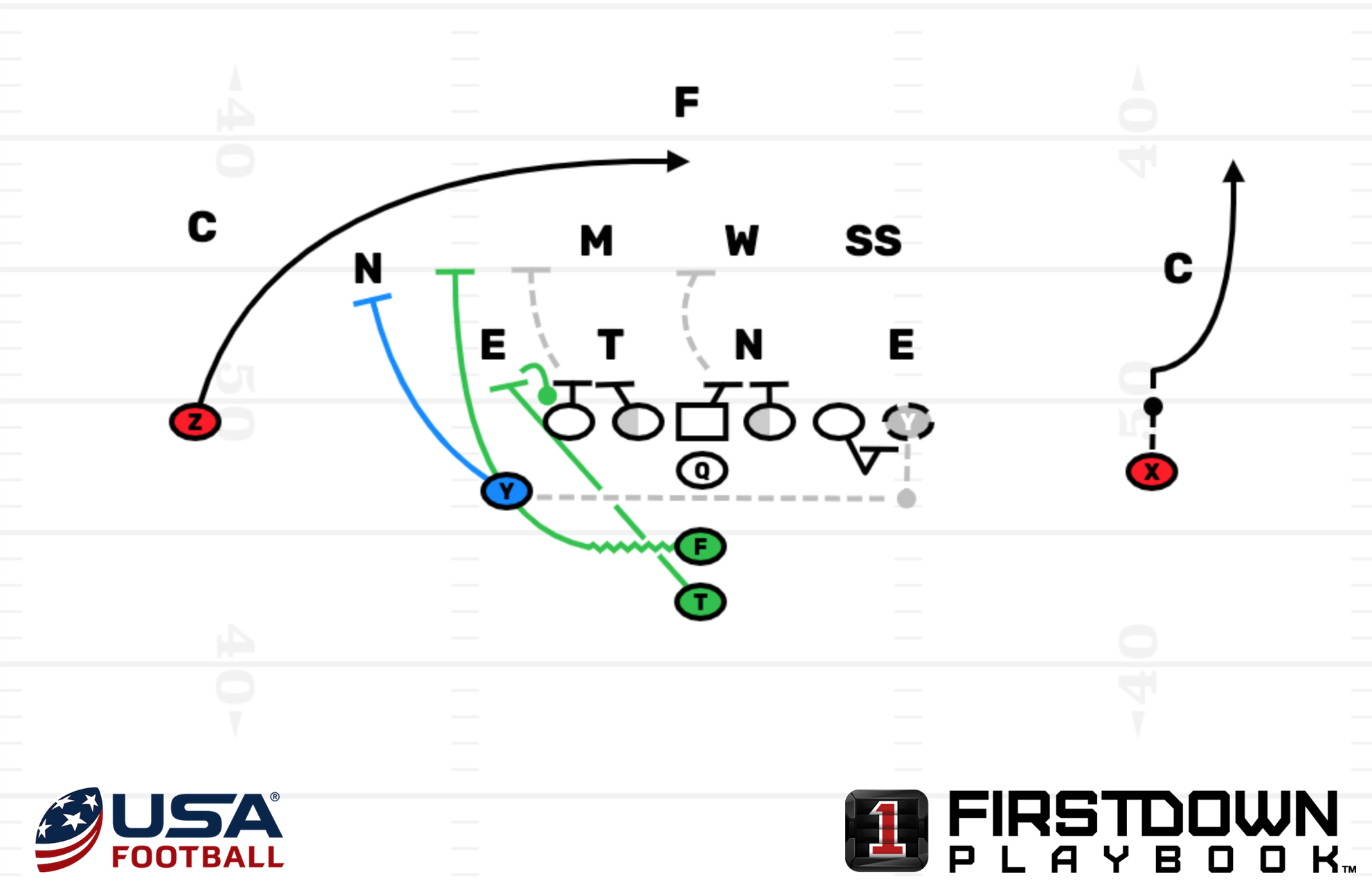 This play is a counter off the previous play. The tight end motions from in-line to the right to a left-wing position. The fullback motions behind the left tackle as the ball is snapped. Everything looks as it did on the previous play, but the left tackle leaves the front side defensive end to block down on the 3-tech before climbing to the second level, the quarterback fakes to the tailback and the tailback bluffs the front side defensive end before turning and looking to catch the screen.

RELATED CONTENT: Learn how to add tags to your Sniffer in your offense

Once again, the offense does a good job of executing their blocks to the front side, but the backside strong safety is unblocked and chases down the running back for a gain of 3 yards.

The offense comes out in a 3x1 set with a nub tight end opposite the trips.  The No. 3 receiver motions across the formation and lines up as No. 1 to the right.  The No. 2 receiver goes in fly motion with speed and gets the handoff.  The offensive line and running back run inside zone to the left and the quarterback fakes to the running back after handing off to the No. 2 receiver.

The tight end and Z-receiver make their blocks on the edge and the slot gains 12 yards. With the defense in man coverage, the slot’s motion at full speed is important as it keeps the nickel from getting in position to make the play. 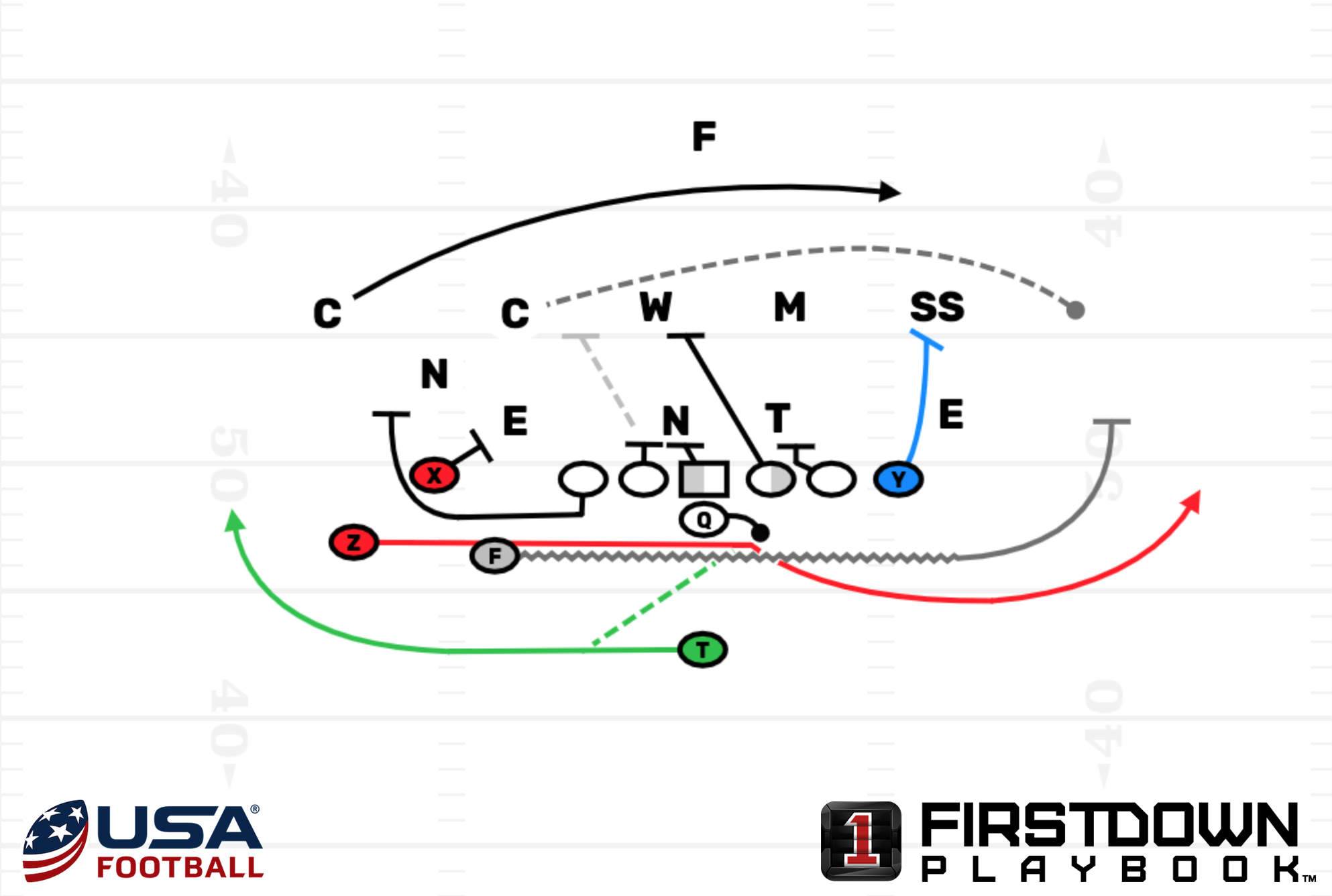 This play is a counter off the previous play. The offense again lines up in a 3x1 set with a nub tight end opposite the trips. They motion the No. 3 receiver across the formation, but this time they put the No. 1 receiver in fly motion. The quarterback fakes to the fly motion and then pitches the ball to the running back to the opposite side. The offensive line blocks outside zone to the left with the X blocking down on the defensive end and the left tackle pulling for the cornerback.

The X, left tackle and left guard all make fantastic blocks in space and the center reaches the nose. These blocks spring the running back for a 26-yard gain. 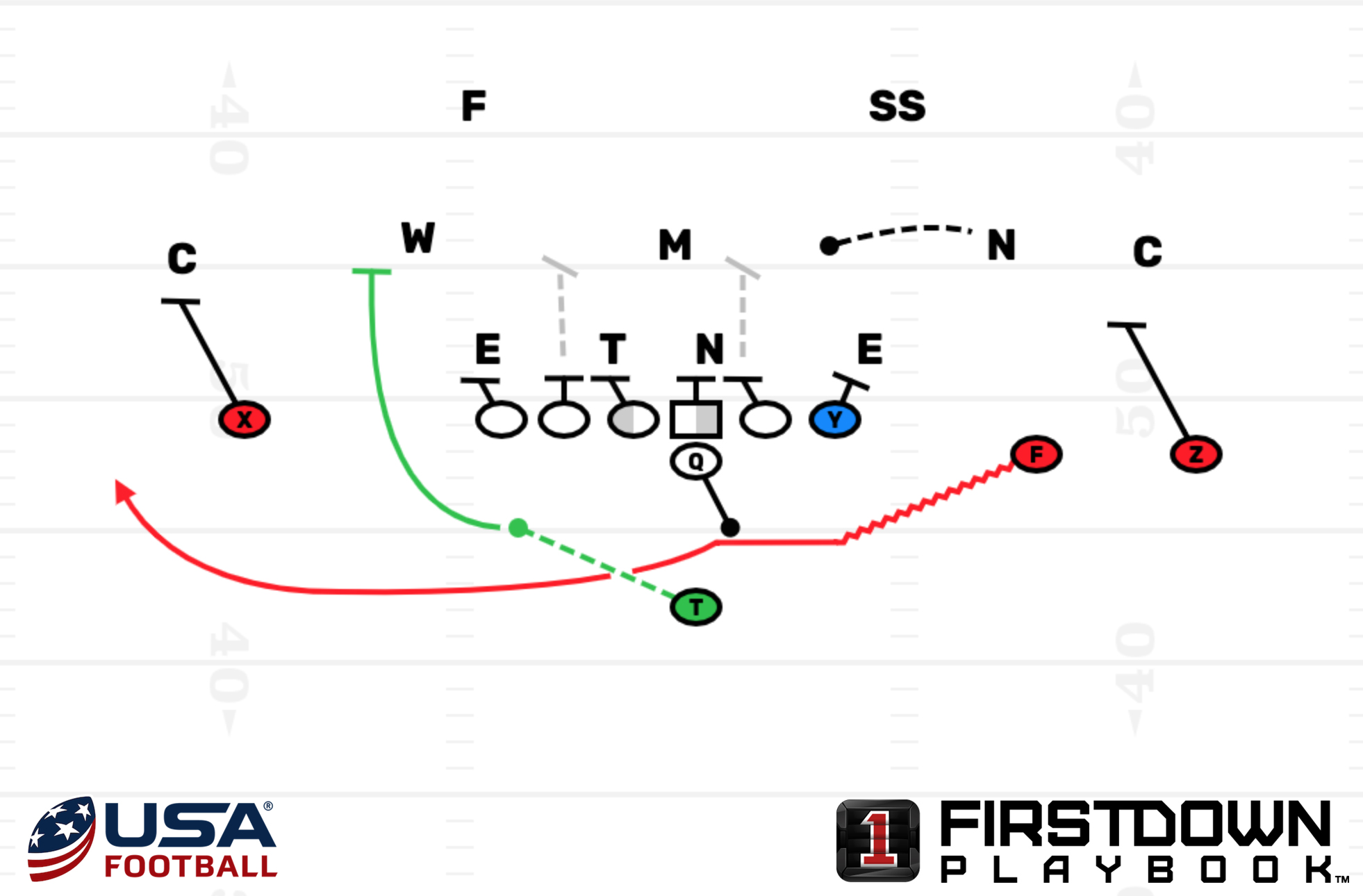 With the running back and X making great blocks on the edge, the slot receiver picks up 6 yards before being tackled by the unblocked Mike linebacker. 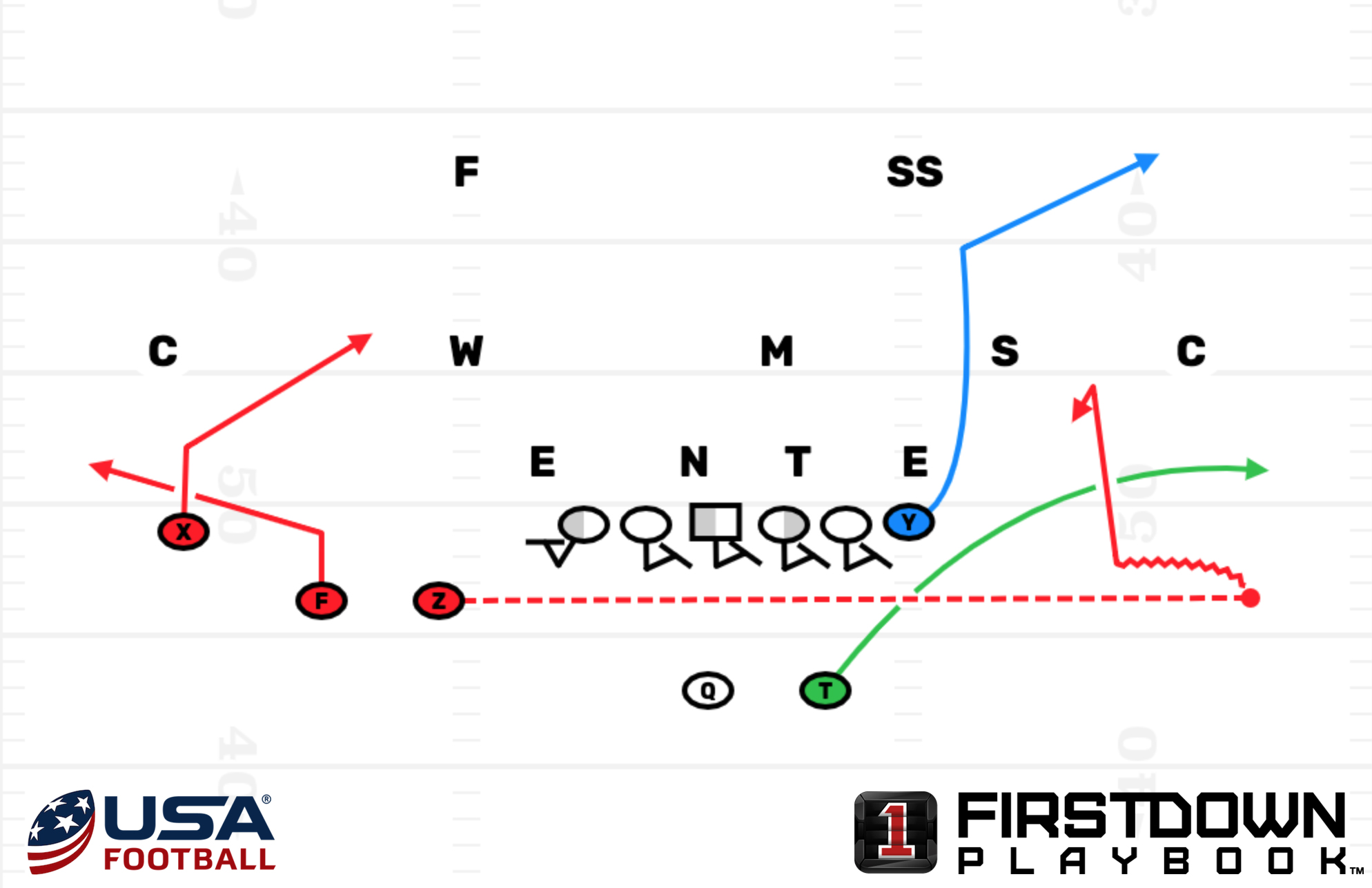 The offense comes out in a 3x1 set with a nub tight end opposite the trips. The No. 3 receiver motions across the formation to become No. 1 to the right then goes in short motion to the inside. The offense free releases the back to the right and runs Spot (Spot/Corner/Flat). The two receivers backside run slant/flat. With the defense playing quarters, the quarterback reads the flat defender and throws the spot or flat based on his movement.

The short motion by the No. 1 receiver gets him inside the Sam LB as he expands to cover the flat and the quarterback finds him for a gain of 5 yards.

Overall, using multiple motions and shifts gives an offense a great way to outflank a defense on the edges and create better angles to execute blocks. This tactic is currently underutilized at all levels of the game and offensive coordinators would be smart to consider employing multiple motions to create schematic advantages that only they can create.