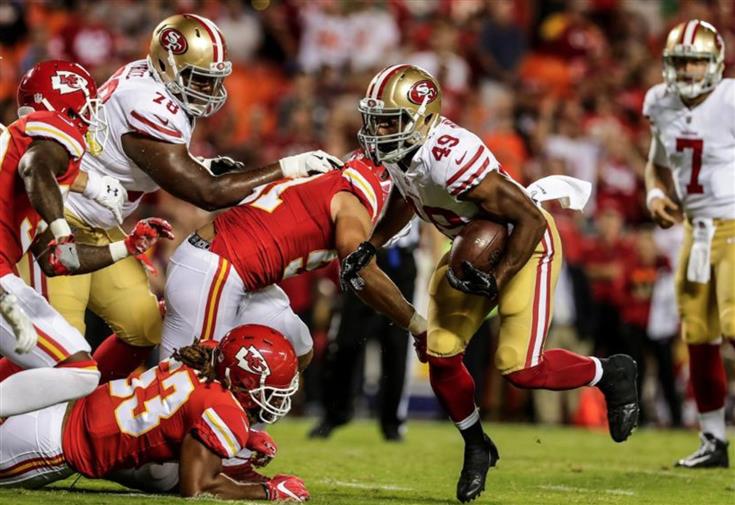 Some observers believe the NFL is sort of a boring league from a schematic standpoint. It’s not as diverse as college or high school. Every NFL team runs the same concepts, but there are subtle differences. Lately, though, it seems that offensive coordinators have been more open to taking plays from the collegiate ranks and just being more creative than usual.

For a football nerd like me, it’s absolute gold when I find a new concept or tweak on an old concept. With that being said, here are three cool NFL play designs from week 8.

Note: I’m not saying these plays are revolutionary, but I found them interesting, and hope you will too.

When people think fullbacks, they think of big, physical lead blockers for running backs on iso plays. Linebackers are taught to step up and meet fullbacks in the hole. However, most of the time, those linebackers have to cover in the fullback as well.

Although they weren’t the first to run the fullback seam, the Seattle Seahawks used it effectively against the Houston Texans.

The Texans are in quarters coverage. Usually, the inside linebackers are responsible for backs who leak out of the backfield. In this case, Benardrick McKinney (No. 55) has to cover any backs who go out on a route to his side.

However, he sees the “iso” action coming at him and thinks he has to beat fullback Tre Madden’s (No. 38) block to get to the running back. McKinney attacks the line of scrimmage hard, which leaves no one to cover Madden.

Madden runs down the seam as the safety to that side goes out to double the receiver on the outside. No one is near Madden before he rumbles for a 66-yard gain.

On the other side, Texans head coach Bill O’Brien is no slouch when it comes to play design as well. He did a massive overhaul to his offense to suit the talents of his awesome rookie quarterback Deshaun Watson (No. 4). He added more run options as well as RPOs that Watson was accustomed to running in his days at Clemson. However, he also added his own twist to these concepts with a fake split zone and fake RPO play action.

This play is designed to get receiver Will Fuller isolated and to give him time on a long developing out route. The defense is in cover-3. The split zone fake gets the flat defender on Fuller’s side to bite, which essentially isolates Fuller with corner Richard Sherman (No. 25) on the outside.

The fake RPO swing to the other side helps to freeze the secondary, but it also freezes the left end. He is untouched on the play, yet is unable to rush the quarterback because he is occupied by both the run fake and swing fake.

Fuller lines up inside to give the illusion that he is going to run down the seam. All the play fakes give him enough time to run 10 yards downfield while bending his seam inside before breaking back outside. Sherman gets absolutely manipulated and gets turned around. Fuller gets wide open and Watson delivers a perfect pass on time and on target for a touchdown.

Defensive coordinator Jim Schwartz is known for his aggressive defenses. He wants his defensive line to shoot gaps and get upfield to disrupt offenses. San Francisco 49ers head coach and offensive coordinator Kyle Shanahan knows this and used that aggression against Schwartz with a shovel screen play.

Quarterback C.J. Beathard draws the defense toward the line of scrimmage with a play fake to running back Matt Breida. The line slides away from the back, which leaves three defenders unblocked on the left. They see the play action and chase it like sharks smelling blood in the water. When Beathard keeps the ball, they all think they have an opportunity for a sack, and turn their attention toward him.

At the very last second, Beathard shovels the ball between the defenders to Breida, who has a convoy of offensive linemen in front of him. There is so much green grass ahead of Breida that he only needed one block on a linebacker to spring him free.