How the duo play action works in the NFL

One of the most popular NFL run concepts over the past few seasons has been the “Duo” concept. Duo is a downhill run that requires the line to down block, and double team (hence the name Duo). The play requires a tight end(s) on the frontside to pick up the edge defenders. A running back with excellent vision and the ability to jump- cut into the open gap can devastate defenses with this play.

Teams that use the concept recognize the need to have play-action off it because defenses that crowd the line with their linebackers could disrupt the timing of the double-teams. The run action lends well to the use of play action.

The protection looks identical to the run play. The offensive line will block down and double team and the tight end(s) will pick up any edge rushers on the side of the play fake. The open gaps as the result of the double teams will entice the linebackers to bite forward, enhancing the effects of the play action. Without any inside help, teams will isolate receivers on shortened splits with corners.

This example comes from the Detroit Lions. With the linebackers concerned about the play action fake, the tight end runs free across the middle of the field. This entices the safety to jump the slot receiver who’s crossing the field unguarded. With no safety help now, the outside receiver gets inside leverage for a deep post route.

One of the best times to use play action is on short yardage situations. The defense must sell out to stop the run, giving the offense their best opportunity to attack downfield. The next video shows the Arizona Cardinals running the same concept on a third-and-short.

Cardinals quarterback Carson Palmer throws this route with excellent timing and the receiver does a nice job of stemming the break at the top of the route. His first step out of the break beats the corner, and gives him the inside leverage he needs. 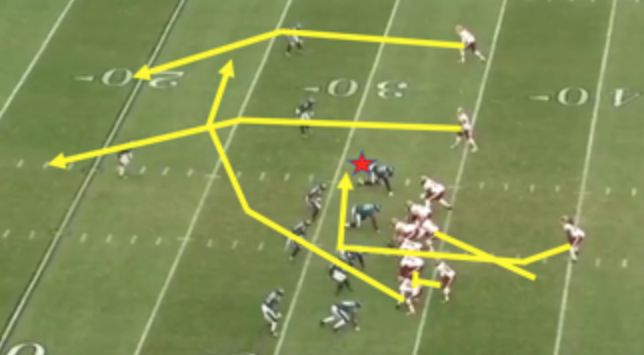 In 2016, Los Angeles Rams head coach Sean McVay, who was the Washington Redskins offensive coordinator at the time, attacked the intermediate zones with this play-action scheme to take advantage of over-aggressive linebackers. The play used the same double post look the Lions used, with a deep crosser to the same side.

The Philadelphia Eagles are prepared for this concept with the linebackers turning and running to make up their lost ground, the running back slips out on his check-down route to replace them. This strategic use of the check-down gives the quarterback an answer against any response they defense may have.

In short yardage situations, many NFL teams have featured a naked bootleg off the Duo action. While writing The Complete Third Down Manual, I noticed Sean Payton used this as his go-to short yardage play in the red zone in 2016. 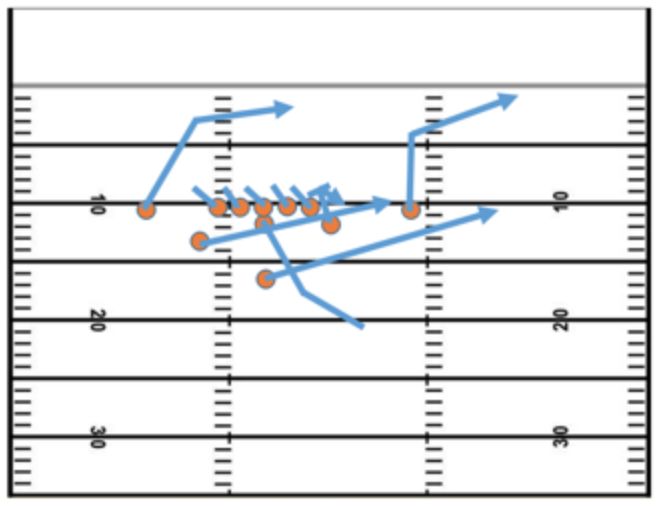 Drew Brees rolls out to the same side he fakes to. The play gives the quarterback a remarkably simple progression read.

The running back is his first read in the flat. The corner route is his second read, and will break open if the corner jumps the flat. The “slide” route from the left H-back is his third read, followed by the slow-release of the right H-back on the right as the fourth read.

This play floods three receivers in the flat area. With the scheme stretching the responsibilities of the defenders on the right, the quarterback will not see any pressure in his face. The line sliding to the left will shore up any backside penetration. This play can be even more beneficial to teams that have mobile quarterbacks, as the quarterback can take off on the naked bootleg and run the ball himself if the defense forgets about him.

Play action can be one of the best ways to attack a defense. Whether they are playing man or zone, play action puts defenders in conflict. Defenders often recover too late to find their pass responsibility after a good fake, giving the offense more big-play potential. They also keep the defense honest and could deter them from playing the run too recklessly.

RELATED CONTENT: How good will Louisville quarterback Lamar Jackson be in the NFL?

RELATED CONTENT: Two plays to add to your playbook from Oklahoma and Clemson