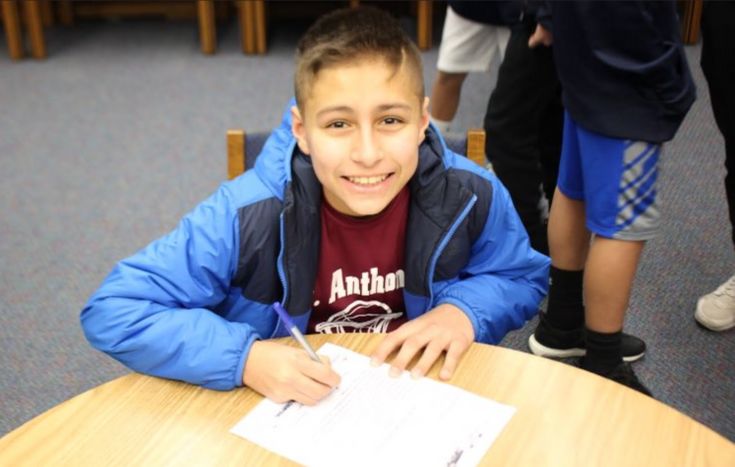 Moving up to the next level of football isn’t always the easiest thing to do, especially when the jump is from middle school to high school. The differences in the rules, competition, pressure to win, and workload can be so meteoric, that it’s understandable for incoming ninth-graders to be a little overwhelmed.

But sometimes it takes just a little something special to make that transition a little easier.

At Oceanside High School on Long Island (Suburban New York), head coach Rob Blount and his staff has come up with something new that is making the leap from eighth-grade football in middle school to being a freshman in high school a bit more relaxing and fun. In this age of kids being addicted to video highlights and with the technology allowing for instantaneous information on a smartphone, youth football players have easy access to videos and new stories when a major high school prospect commits to a college on national signing day.

This year, for the first time, the Sailors are welcoming their new players that will be graduating eighth grade and moving up to high school next season by signing a “letter of commitment.” It’s part of an orientation meeting for the incoming players and parents to get a better understanding of what to expect in high school.

“I talk about goals and expectations and where we’re looking to go in the future,” said Blount, who guided Oceanside to the Nassau County Conference One title this past season, the school’s first in 40 years.

“The last couple of years with social media, you see more and more of these national signing days and commitments. (The eighth-graders) are going through their photo shoot and putting on their jerseys and signing their letters of commitment. It’s pretty much basic things that we would expect from our players and our program. I’m addressing things like being a good citizen and being a good young man.”

The objective of the letter of commitment is to show the kids that the coaches, program and school are invested in them and that the goal is for them to be more than just football players. At the end of the day, the bottom line is for these kids to also be prepared for the real world. Wins and losses play a huge role in the success of a high school football program, but they also have to understand that there’s life after football.

“I think the greatest thing about football is its family unity and an opportunity to mold and help shape young men as they go through the process of playing football,” said Blount. “Learning about adversity, commitment, trust and respect for other people…those are key values that the game provides and really allows people to not only be successful in the game, but it shapes out in the business world and educational field for them later on in life.”

The reaction to this unique but important part of the process in welcoming his freshman to the program has been very positive. In fact, Blount has received texts and calls from other Nassau County coaches who have nothing but good things to say about it. Since imitation is the best form of flattery, some of the other coaches are thinking about doing the same thing.

The incoming freshmen who will join the 2018 Oceanside Sailors had a chance to enjoy something special as their eighth-grade year winds down. Blount has photos taken of the kids signing the letters and putting the jerseys on and then posts them on social media.

It’s something that really excited the first group of eighth-graders who are ready to make the transition to high school.

Blount, like many other high school coaches on Long Island and around the country, are also teaching the game in a positive way thanks to USA Football’s “Heads Up” program.  With so much concern about injuries in football, it’s important for coaches to know how to teach fundamentals correctly and aspire to make the game safer.

When you combine winning, teaching “Heads Up” football and implementing the letter of commitment, Rob Blount has established a strong foundation at Oceanside High School. Football is a wonderful experience for kids, but so is feeling like part of the team as a freshman and learning how to play and act the right way.

What’s going on with the Sailors is something that will certainly attract the attention of many high schools, not only in the New York/New Jersey area, but around the whole country.

Peter Schwartz is a sports anchor for the CBS Sports Radio Network, FOX News Headlines 24/7 and WCBS 880 Radio in New York. His son Bradley plays youth tackle football for the Super Bowl Champion East Meadow Rams on Long Island while his younger son Jared plays flag football for the LSW Giants. Peter, his wife Sheryl and the boys are busy cheering on the New York Jets when they’re not at a youth football field.