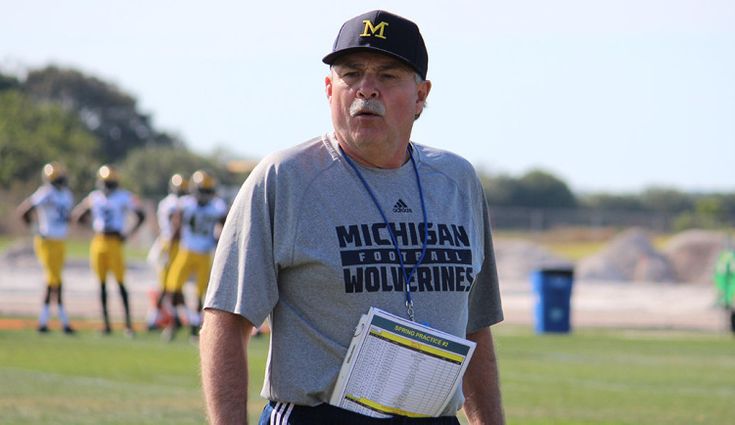 Jim Harbaugh has always had a knack for putting together great coaching staffs, and one of his best hires at Michigan is defensive coordinator Don Brown, who led Boston College to No. 1 in total defense before going to Ann Arbor.

In 2016, Brown made Michigan the top defense in the country, and the Wolverines were No. 3 last season. Brown believes playing great defense starts with stopping then run. At a 2017 clinic, he explained, “If you do not stop the run and stand for something, you are in a lot of trouble. I do not want to hear, 'They throw the ball.' You must stop the run.”

1. You must involve all 11 players in the run game

Though this seems like an obvious key, there aren’t many teams that swarm to the ball like Michigan. It’s clear when you watch them - they pursue the ball with a purpose, and get into their run fits with aggression. They know how to play off each other’s leverage and take proper pursuit angles.

"He told me if I wanted them to pursue the football tell them you love them. You have to show them you love them and get them to play hard. I did not say make it easy or accept mediocracy, I said let us get it done." - Don Brown pic.twitter.com/MWrnRvECSS

On this play, the Florida offense tries to run the ball outside with a strong side wide zone play. The end, who's responsible for contain, sets the edge, and the ball carrier has absolutely nowhere to go because of the strong pursuit by the rest of the defense.

This may not seem like a particularly impressive play, but if you really watch how much effort every player gives and realize Michigan does this down after down, it’s easy to see why they have such a strong defense.

Brown believes you get a team to buy into the importance of pursuing the ball with passion with the relationship you have with them. He said, “You have to show them you love them and get them to play hard. I did not say make it easy or accept mediocrity. I said let's get it done."

It seems abstract, but you could only get so far with the taskmaster act - repeatedly yelling at your players to run to the ball down after down. At some point, that act is going to get old. True motivation comes when your players understand that you want what’s best for them.

2. You must have "overhangs," and develop trust in your front so they know where your help is

Overhang defenders are those close to the box. They could be playing right on the edge or outside of it. They're typically responsible for defending the flats against the pass or have secondary contain responsibilities.

Having talented and versatile overhang defenders is important in defending the multitude of spread-option attacks that are so prevalent in football today. Box defenders can play more aggressively if they can rely on overhang players to come up in run support.

3. Have a way to "spin" or "travel" versus motion to create overhangs

There are many ways for defenses to adjust and add an overhang defender, like having multiple defenders bump over a gap. Brown prefers to “spin” his safeties.

4. Be fundamental in your approach, but also have tempo changes in your run defense

Michigan’s defensive scheme can be exotic, with different personnel packages and well-designed blitzes, but none of it would work without their dedication to technique and fundamentals.

Brown explains, “I am a schemer. I like it. I want to make your life miserable. But if you want the schemes to work, you better coach fundamentals. You have to give them a toolbox full of things they can use. You want something in that tool box they can hang their hat on.”

In this example, notice how every defensive lineman is using the same push-pull technique to control blockers while keeping their leverage. The linebacker (No. 10) fills the A-gap with aggression, and does a good job using his hands and then using that technique. The defensive front strings the play out, and the overhang player - the safety (No. 23) - makes the tackle with outside-in leverage.

These four keys may seem simple, but coaches oftentimes lose focus on what’s really important. Watching film of Don Brown’s defense, it’s clear what his focus is. The players pursue the ball harder than any team I’ve watched. They are always overhang defenders in running situations. And, their fundamentals and understanding of leverage are very sharp. Everything he does from game-planning to designing a practice plan is done with these four keys in mind.