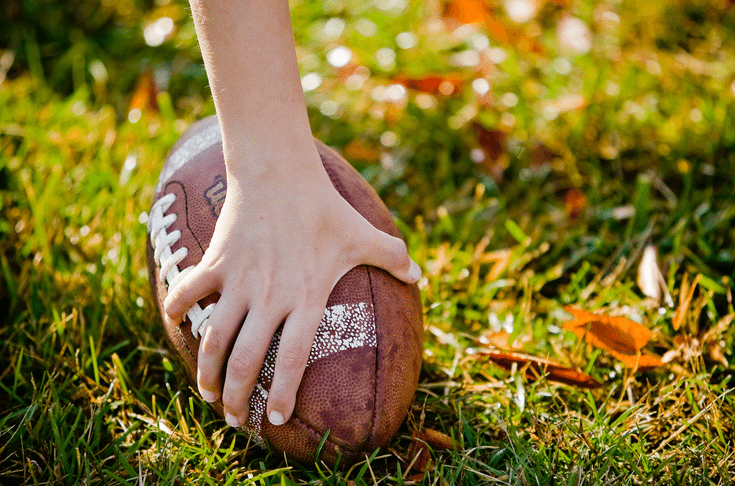 Watching my 7-year-old son Jared play flag football this past season brought back some wonderful memories. It was great to see Jared and his teammates getting a chance to play a bunch of different positions, because at a young age it’s important to have fun and find out what works and what doesn’t.

It brought me back to when my older son, Bradley, started playing youth tackle football and saw action everywhere as well. In fact, when Jared was playing running back and scored on a long touchdown run, I had a good chuckle after I stopped jumping up and down and cheering. That was because Bradley did the same thing when he was playing instructional peanut football.

I love Bradley with all my heart, but he has my speed and it didn’t take long to realize that his future in football was not going to be at a skill position.  He’s a big kid and during his second year of pee-wee level football, he wanted to be the center and that’s where he settled into. Jared, on the other hand, has a little more speed, so I think we’ll see him get to the end zone a few more times, but somewhere down the road, he’ll probably find a position or maybe two that best suits his skill set.

That’s exactly what happened with Bradley. He started playing football when he was 4 years old, and learning everything he could about the sport. Now he’s 12 and getting ready to make the transition to playing middle school football later this year when he moves up to seventh grade. There was a point where my wife Sheryl and I, and more importantly the coaches, could see what positions would be the best fit for Bradley.

For the last five years, Bradley has been the starting center on his team and also sees some time on the defensive line. He wanted to be the center because his cousin played the position and his favorite football player was New York Jets center Nick Mangold.  But it’s one thing to want to do something and another thing to make it happen. Bradley found a position he liked to play, and he’s now hoping that his skills and passion will get him to subsequent levels.

Hey, I’m not putting him Canton anytime soon, but It’s going to be fun to see just where this takes Bradley, because he found a position that he enjoys, is good at, and is the right fit for him at the right age.

A parent has to have realistic thoughts when it comes to their child playing football. Many parents would love to see their kid be the star quarterback or the lightning-fast running back, but it’s also really cool to see your child anchor the offensive line, get pressure on the quarterback, or make a great play in the secondary.

There comes a point when it’s really a good idea for a child to specialize at a position in football, especially if the skills and the body size dictate it. Bradley isn’t lining up out wide and going out to catch a pass, and he’s certainly not back-pedaling in the secondary to defend a quick receiver. But he can snap the ball very well and block, and he gets in on defense for a few plays here and there. It would be foolish to have tried to steer him toward another position when he was younger because it didn’t take long to see that he was a growing boy.

Jared is going to be a big boy too, but every kid is different. In flag football, he could wind up playing a specialized position anywhere down the road and the same could be true if he decides to give tackle football a chance. Just like his big brother, playing at a young age is the right time to give all the positions a try and see where you fit in the best.

While I share the thoughts of many coaches and sports medicine experts that a child shouldn’t specialize in any one sport at a young age, sometimes it’s good to specialize in a specific position in a sport at the appropriate time. A parent needs to monitor this and realize what is best for the child and not have any unreasonable expectations.

Peter Schwartz is a sports anchor for the CBS Sports Radio Network, FOX News Headlines 24/7 and WCBS 880 Radio in New York. His son Bradley plays youth tackle football for the Super Bowl Champion East Meadow Rams on Long Island, while his younger son Jared plays flag football for the LSW Giants. Peter, his wife Sheryl and the boys are busy cheering on the New York Jets when they’re not at a youth football field.