From teething to touchdowns ... how my kids fell in love with football 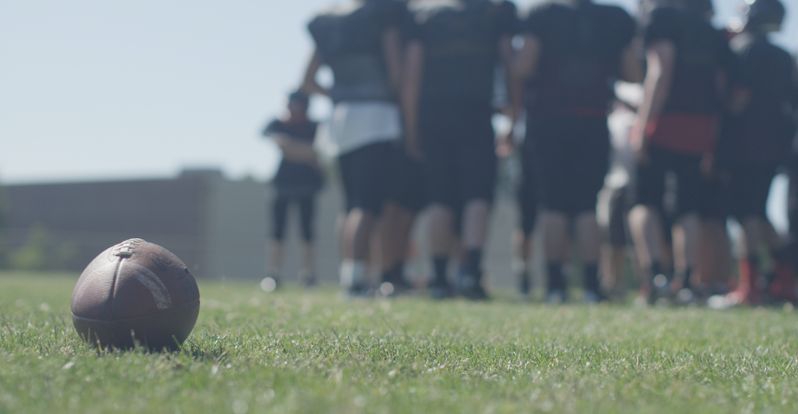 I had a very important conversation with both of my sons within an hour after they were born. The first chat was with Bradley in 2005 when my wife, Sheryl, was in recovery and the nurse was cleaning him up. The same thing happened when Jared was born in 2010, and both conversations went something like this:

“Welcome to the world Bradley/Jared. Mom and Dad love you very much, but there’s something I have to tell you.  Since Mom and I have had to suffer, so do you. I need to tell you that we’re New York Jets fans,” is basically what I told them.

Oh my goodness, the crying fits that both of them went into! I’m not joking; they were both hysterically crying. How did they know? They had to have been paying attention in that womb for nine months! They would both eventually fall in love with football in contrasting ways.

RELATED CONTENT: A youth football parent has to realize when it's OK to specialize

When Bradley was born, I was the radio play-by-play voice for the New York Dragons of the Arena Football League. I would take Bradley to practice with me every day, from the time he was in diapers sitting in his carrier to the point where he was running around the field with a football in his hands after practice. He picked things up pretty quickly and that’s really where it all started.

Bradley, now 12 years old, was four when he started playing youth tackle football. Eight years later, he still loves the sport and is set to begin middle school football next season. He eats, sleeps and breathes football and has the passion to play the game as long as he can.

He wanted to play center because his cousin, Stephen, was a center through high school and thought it would be great to be the player who starts each offensive play.  He wears No. 74 because former Jets center Nick Mangold was his favorite player, and he has really improved his game each year. Bradley has been fortunate to play on two Super Bowl winning teams and is very excited about making the transition to a new level next year.

My younger son, Jared, took a bit of a different path to loving football. Of course, he always tagged along to watch Bradley’s games and even made it through going to a couple of Jets games at a very young age. Jared is now 7 years old, and his love for the game really blossomed over the last year or so.

It was just a few years ago when my wife and I thought Jared would never utter the words “love” and “football” in the same sentence. As Bradley was getting ready to start training camp, Jared decided he wanted to try football. As supportive parents, we allowed Jared to give it a try, but after a few days he clearly wasn’t comfortable with tackle football. He didn’t like wearing all the equipment and decided to stick with soccer.

What Jared needed in order to fall in love with football was a comfort level. He liked the concept of football and wanted to play, but needed to do it in a way that he would be happy. One day, he overheard Bradley and I talking about a friend of his who was playing flag football, and Jared seemed to be intrigued by it. So, this past fall, Jared started playing flag football and he loved it. He had so much fun because he had found an avenue to play a sport that he really loved and he was so sad when the season ended.

Jared has also gotten to the point where he has joined his brother Bradley in being pumped up to go to Jets games (well, as pumped up as we could be) and he has also learned a lot about the game from watching on TV and playing Madden. Jared has also started collecting football cards, and that has become a huge part of his love for the sport.

This may sound strange, but Madden has really taught both of my kids a lot about the game. Make no mistake about it, they don’t just sit around all day playing video games, because there’s life, school work, and oh yeah, playing real football. But don’t discount the impact the Madden game has had on kids and how it really does teach them about the game.

It’s really had a huge impact on Jared’s sudden surge in loving football.

It’s great that both of my sons love football and they even go to the same youth football camp each June, where they continue to learn fundamentals that apply to both tackle and flag football. They each took different routes to get to this point. Obviously, there’s a 4½-year age difference, so Bradley is a little ahead of Jared in overall football acumen, but not by much.

Jared may have taken a little longer than Bradley did, but they both love football and that’s a good thing in our house. After all, the sign in our den says, “We interrupt this family for football season!”

Peter Schwartz is a sports anchor for the CBS Sports Radio Network, FOX News Headlines 24/7 and WCBS 880 Radio in New York.  His oldest son, Bradley, plays youth tackle football for the Super Bowl Champion East Meadow Rams on Long Island, while his younger son, Jared, plays flag football for the LSW Giants. Peter, his wife Sheryl and the boys are busy cheering on the New York Jets when they’re not at a youth football field.