Why the delay route can work at any level of football 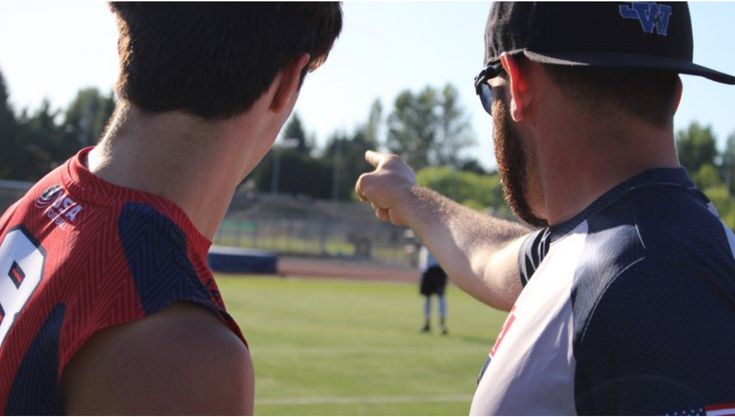 Every offense, from high school all the way up to the NFL, has some sort of bootleg action off its main run concept. The play is designed to take advantage of over-aggressive run-stopping defenders. The play will stretch their responsibilities both horizontally and vertically down the field. Triggering linebackers have a hard time of recovering and getting back to defend deep crossers. This action has similar effects to a basketball team helping hard on a pick-and-roll, and having to rotate to cover the shooters. Somebody will be open.

Through film study, I have noticed a new route that appears to make the concept more efficient. The “delay” wrinkle is littered throughout the NFL. The play is shown below, with the delay route diagrammed in red.

The delay route runner will block down on the defensive end for a few seconds, and then turn around and shuffle toward the quarterback.

The play is similar to traditional rollouts, with a three-level stretch to the side the quarterback is rolling toward (vertical/comeback, flat, and deep cross). The addition of the delay route has a few benefits for the offense:

With the Cleveland Browns playing man coverage, the middle linebacker becomes concerned with the “slide” route (F in the diagram). The defender on him has to chase from the other side of the formation. The edge player lined up over the tight end is also concerned about the slide route and grabs him as he crosses his face. With two defenders on the slide route. nobody guards the delay route.

The play is not limited to the West Coast/pro style offense. The diagram below shows the play out of a traditional wing-T set. The addition of the delay route allows the offense to adjust the protection. The line can sell the buck sweep fake by pulling away, without an unblocked end confronting the quarterback immediately. 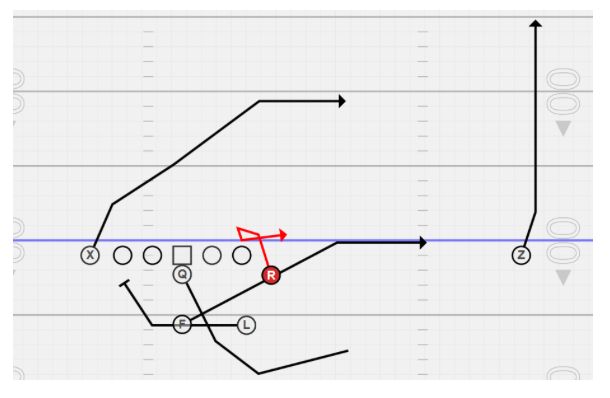 The 11 personnel spread guys can assimilate this concept as well. Los Angeles Rams coach Sean McVay used a variation shown below in 2016. The offense will fake inside (or outside) zone to the left, forcing the weakside linebacker and middle linebacker to fill their gaps.

The deep crossing route, delay route, and QB run threat place the middle linebacker and defensive end in a 3-on-2 situation.

In the video below, the slot on the whip route opens up, so Washington Redskins quarterback Kirk Cousins hits this route on time for a nice gain. Against a single high safety, the front side hook defender and defensive end are placed in the 3-on-2.

The whip route times up nicely with the play fake. The timing allows the quarterback to hit the receiver quickly off his break, while the defender is still recovering.

In the NFC championship game, the Philadelphia Eagles used the delay route on a third-and-5 play call. They lined up in a bunch formation and faked the wing back counter they had called the previous week against the Atlanta Falcons. Instead of an H-back, fullback, or wide receiver being the first player in the flat, this variation uses the tailback.

The fake gets the defense flowing in the opposite direction of the rollout. Many high school teams that use a wing back counter action can simulate this play easily.

The defensive end must choose between the quarterback or the tight end. When he continues to rush upfield, the tight end has space to make the play, and pick up a first down.

This play is super simple and can even be used in youth football.

Adding the delay route to a strong rollout action gives the offense a way to stretch a defense past its breaking point. The route is flexible and can fit into any offensive system.