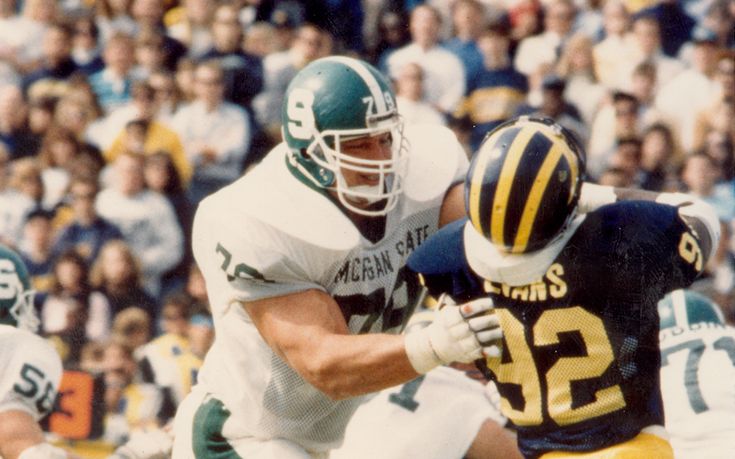 When you say the name “Tony Mandarich,” most football fans immediately think of two things: his now infamous “The Incredible Bulk” Sports Illustrated cover, or how his NFL career did not pan out the way everyone – Mandarich included – thought it would. The word “bust” is often attached to the mammoth former offensive lineman, but that’s not really how the story ended. The real story is much more inspiring.

Born in a small town in Ontario, Canada, Mandarich dreamed of gridiron glory while his friends and classmates grew up wanting to star on the ice as hockey players. Already massive by high school standards, he and his family knew he needed to go somewhere in the United States if he had any hope of achieving his goals.

While attending Theodore Roosevelt High School in Kent, Ohio, Mandarich caught the eyes of several college teams. He ultimately chose Michigan State University, thanks in part to recruiting by its defensive backs coach at the time, Nick Saban.

“He was kind of assigned that region to recruit from because he went to Kent State,” Mandarich said. “Even back then, with him not being my position coach, I was struck by how different he was than other coaches. You could tell there was something more to him. He was, and still is, on a different level than a lot of coaches.”

With the Spartans, Mandarich soon began racking up the accolades, helping to lead a powerful offensive team. He was a two-time Big Ten Offensive Lineman of the Year winner, a consensus first team All-American his junior year, and the Outland Trophy winner in 1988.

“There were times where I did have to pinch myself,” he said. “In Oakville (Ontario), they still have the same aluminum bleachers that they had since like the ‘70s and we would get maybe 20 people in the stands for our home games. Now here I am, my second game, I’m playing against Notre Dame!”

He declared for the NFL Draft as a junior. Scouts and coaches were blown away by his measurables. According to Sports Illustrated, Mandarich weighed 330 pounds, ran the 40-yard dash in 4.65 seconds, did a standing long jump of 10 feet 3 inches, leaped vertically 30 inches and bench-pressed 225 pounds an astounding 39 times.

It’s at this point that most people think they know the way the story goes. The Green Bay Packers took him with the second overall pick in the 1989 NFL Draft. They took him after Troy Aikman and ahead of future greats such as Barry Sanders, Derrick Thomas, Deion Sanders, Steve Atwater, Eric Metcalf, and Andre Rison. As most know, it didn’t work out for Mandarich or the Packers.

But this was not the end of Mandarich’s story.

“I know people have preconceived notions about me and my career, and that’s not their fault, that’s on me,” he said. “For myself, though, and for other athletes who have had to wear the ‘bust’ label, when I came back, I tried to set an example. I wanted to show that no matter what, it’s never too late to make things right.”

After four years away from the game, three years getting his health in order, his life in order, his mind in order, and his spirit in order, Mandarich mounted an improbable comeback. He signed as a free agent with the Indianapolis Colts in 1996 and worked his way into a starting role as a guard.

So, what’s Mandarich doing now? Ironically, it all ties back into that infamous SI cover. These days, instead of posing for cover shots, Mandarich is taking them. He launched a career as a professional photographer and is now much in demand for magazine shoots and advertising campaigns.

“I started shooting as a hobby and I found out I was pretty good at this,” he said. “Now, I’m out every day shooting either for myself or commercially. I don’t know how far I can or want to take this, but I know I want to be as good at it as I can.”

“It was drilled into my head by the guys at Michigan State and I think it is true in football and in life,” he said. “You can’t take plays off and you can’t replace hard work. Effort in football and effort in life go a long way. I learned that then and I live by that now.”