Former National Team players show they're impressive off the field, too 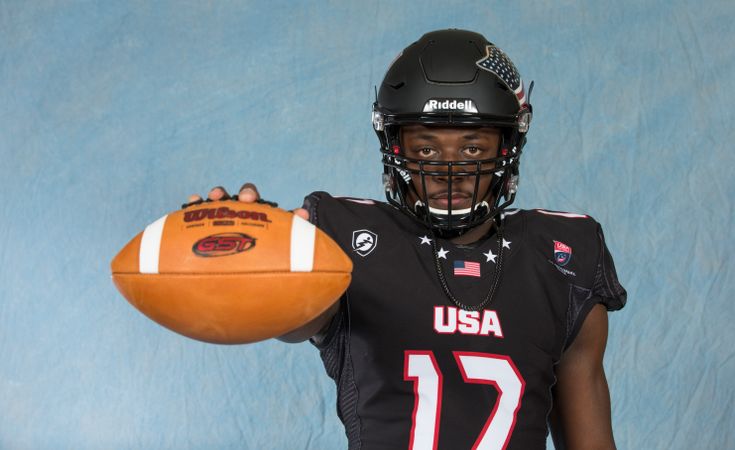 For U.S. National Team Senior Manager Aaron Ingram, seeing what competitors within the program do off the gridiron and in their lives past high school is one of the most rewarding parts of the job.

Three former International Bowl competitors known for their citizenship as well as their athletic exploits all made a buzz within the last few days.

According to hokiesports.com, the 6-4, 235-pound Patterson carries a 4.7 GPA, shovels sidewalks for the elderly, tutors elementary school students in the classroom and in football, and works with the disabled. He made an impact on those around him as a member of this year's U-19 U.S. National Team, which beat Team Canada 47-7 as part of International Bowl IX at AT&T Stadium in Arlington, Texas. The week featured an unforgettable Community Day Blitz that included a trip to The Green Oaks School.

Loved every minute of it 💪🏽 🇺🇸🇺🇸🇺🇸
Thank you @USNFT pic.twitter.com/vGSE9V0qtt

"Just a high-character, high-quality individual," Ingram said. "I told him he could be the president of the United States if he wanted to. He's that type of kid. Very polished. I can't say enough good things about him."

Patterson was the second National Team finalist for the Watkins Award in the past three years, following Ohio State redshirt freshman QB Dwayne Haskins Jr., who played on the 2016 U-19 squad.

Incredibly Honored to be asked to the Prom by my good friend Diana! Check out this video of Mesa Special Ed Staff and Mesa Students helping Diana (and me!) have a memorable moment! We are going to have a great time at the dance! #whatmatters #humbled pic.twitter.com/ywaFZcdWRl

It's easy to see why Miller - a three-year National Team member - is so well-respected throughout his school and everywhere football takes him.

"I think he's the steal of the century for Towson," Ingram said. "Very similar to Quincy, just outstanding character. You can put those guys on the cover of the media guide and not worry about them for a second. We wanted him to be our World Championships quarterback this summer, but he's reporting July 2, so he can't. He's one of the best character people who's ever come through our program."

Miller concluded his International Bowl experience in style in January, with an MVP performance in the U-19 Select's 48-13 victory over Team Nordic.

Playing the Greatest Team Game representing the Greatest Country was an experience I will never forget! Thankyou USA Coaches, @usafootball , AND MOST OF ALL my USA TEAMMATES - So proud to have been a part of this TEAM and a USA FOOTBALL PLAYER! 🇺🇸🏈#1 @USNFT #EARNYOURSTARS pic.twitter.com/DynnniYMHN

"The work ethic on that kid, wow," Ingram said. "He might not be the biggest, fastest or strongest, but he's going to outwork you. A 4.3 GPA out of high school, I think he's on the two-deep (roster) for them going into spring ball, so his future's bright, too."