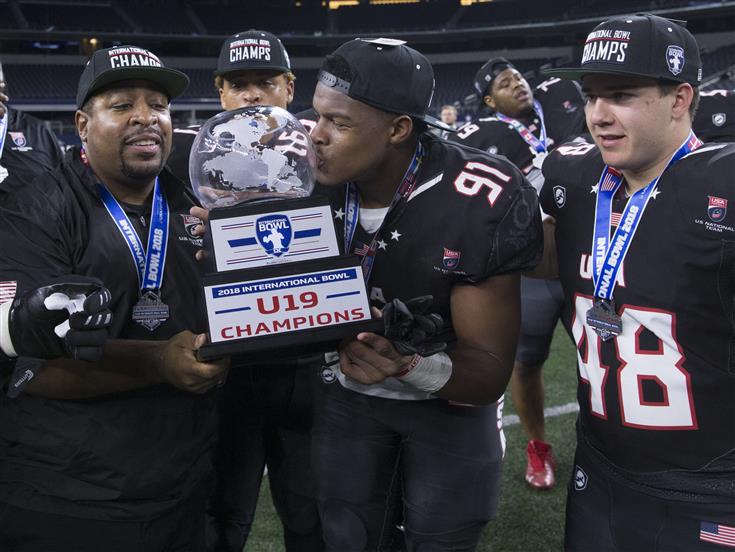 The last of three days of International Bowl IX got underway Friday morning, with all four games broadcast on ESPN3. Here's a look at the on-field action.

The U.S. dominated from the opening kick and in all facets, including a 472 to 87 yardage advantage.

"I was happy that the guys really came out and played well and aggressive," said U-19 coach Elijah Brooks of DeMatha Catholic (Maryland) High School. "We talked about playing fast, and they did that and did a great job."

Spencer Sanders (Denton, Texas), who was able to squeeze in a varsity basketball game earlier this week, was named MVP. 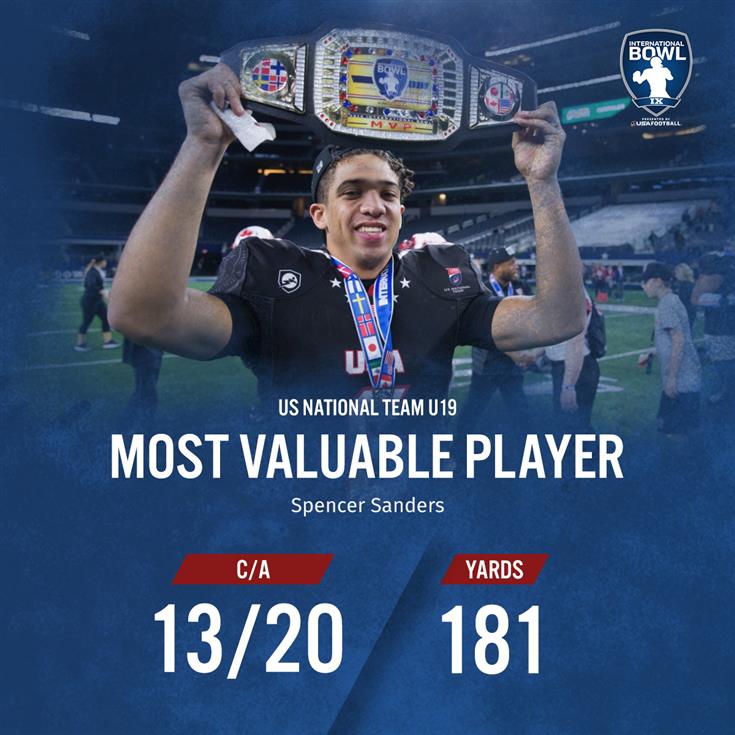 It was 13-0 less than two minutes in, after a 56-yard touchdown run by Christian Turner (Flowery Branch, Georgia) and a 15-yarder from Rashod Bateman (Tifton, Georgia).

On special teams, the U.S. had a blocked field goal and this magical punt return by Isaiah Bolden-Stinson (Wesley Chapel, Florida).

The U.S. added rushing TDs by Hassan Haskins and Tavion Thomas (Dayton, Ohio), and two field goals by Hayden Rome (Houston, Texas) in the second quarter for a 40-0 halftime lead.

After Turner added another TD in the third quarter, Canada ended the shutout bid with a 4-yard scoring run by Andreas Dueck. 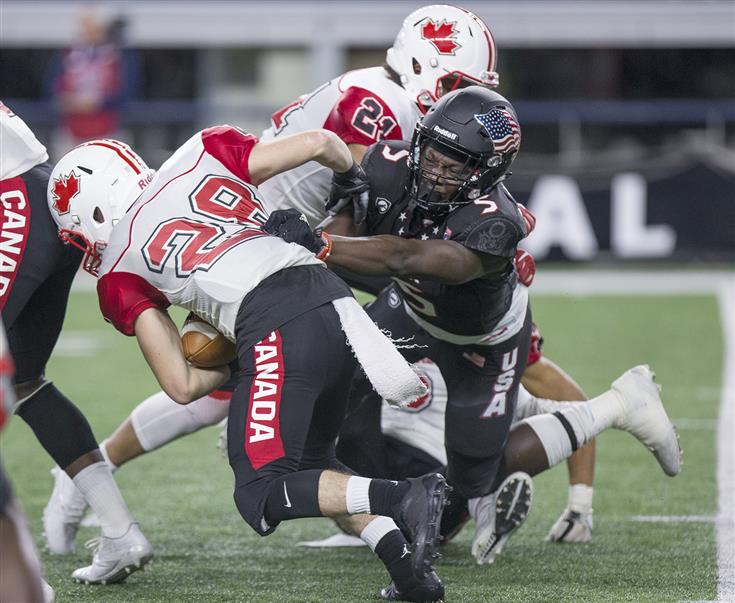 It was a memorable week for everyone involved.

"From Day 1, the guys let their egos go, bought into playing for Team USA. So many great personalities, and good, genuine kids," Brooks said. "They were extremely fun to be around."

Kendall Milton (Clovis, California) and Myles Nash (Rowlett, Texas) combined for 315 total yards and five touchdowns, as Milton - the top-ranked running back in the Class of 2020 - took the MVP belt. 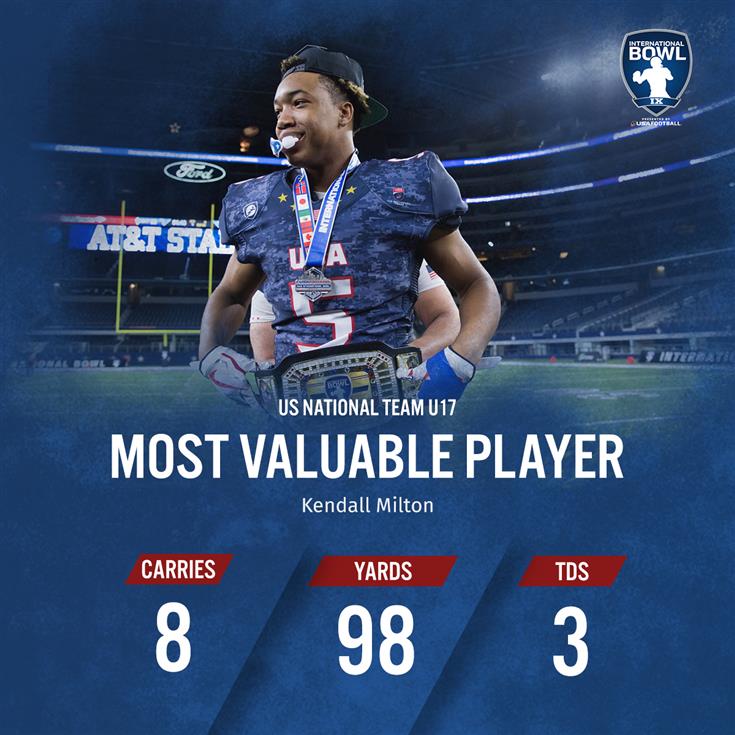 Fabrizio Pinton (The Woodlands, Texas) put the U.S. on the board with a 31-yard field goal early in the second quarter. After a 9-yard touchdown by Milton, Ken Seals (Azle, Texas) followed a Lawrence Anderson (Norfolk, Virginia) interception with a 4-yard TD pass to Trey Goins (Owasso, Oklahoma) just before halftime.

Nash opened the second half with a bang, as he took the kickoff 88 yards to the end zone, and Milton made it a 31-point lead with a 48-yard score.

With a 54-yard TD pass from Charlie McMillan to Jordan Ivany with 4:42 left in the third quarter, Team British Columbia snapped a streak of 128 straight U.S. points over the first three games.

Nash started a new streak on the next possession with an 88-yard run.

Milton followed that with his third score from 24 yards out, and Pinton capped the scoring with an 42-yard field goal.

With four tackles and two hurries, William Hatter Jr. (Houston, Texas) was named Defensive Player of the Game. John Lyons (Bogota, New Jersey) had a fumble recovery, one of three forced turnovers for the U.S. 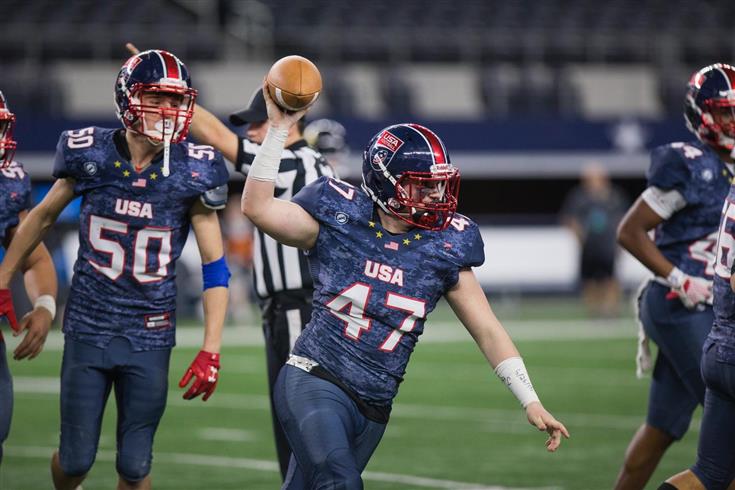 A first-quarter interception by Hunter Washington (Katy Texas) set up a 2-yard touchdown run by Emaud Triplett (Owasso, Oklahoma), who scored twice more as the U.S. led 28-0 at the break.

Along with a blocked punt by Bobby Babcock (Hobart, Indiana), the U.S. defense – which yielded just nine yards in the first half – made things tough up front, including pressure from Defensive Player of the Game Tunmise Adeleye (Fulshear, Texas). 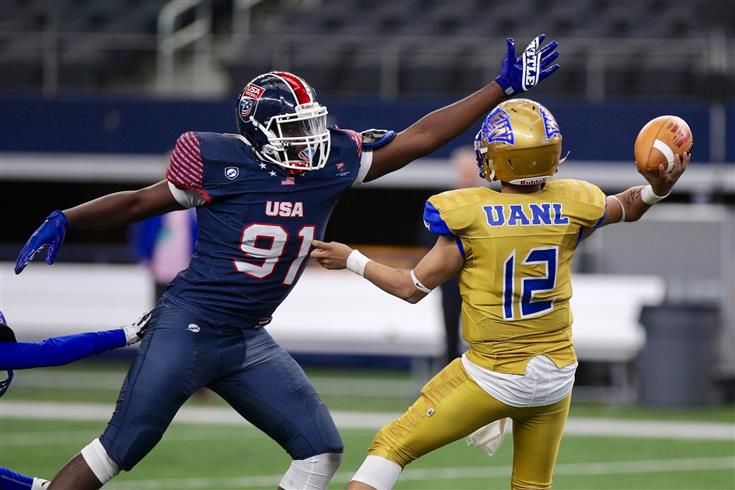 After Triplett added his fourth TD early in the third quarter, Adeleye followed that with a safety and Xavier Copening (South Windsor, Connecticut) exploded for a 64-yard score.

Kenneth Borders (Richardson, Texas) had a defensive gem in the closing seconds, as he caught a backfield pitch in midair and took it 78 yards to the end zone. 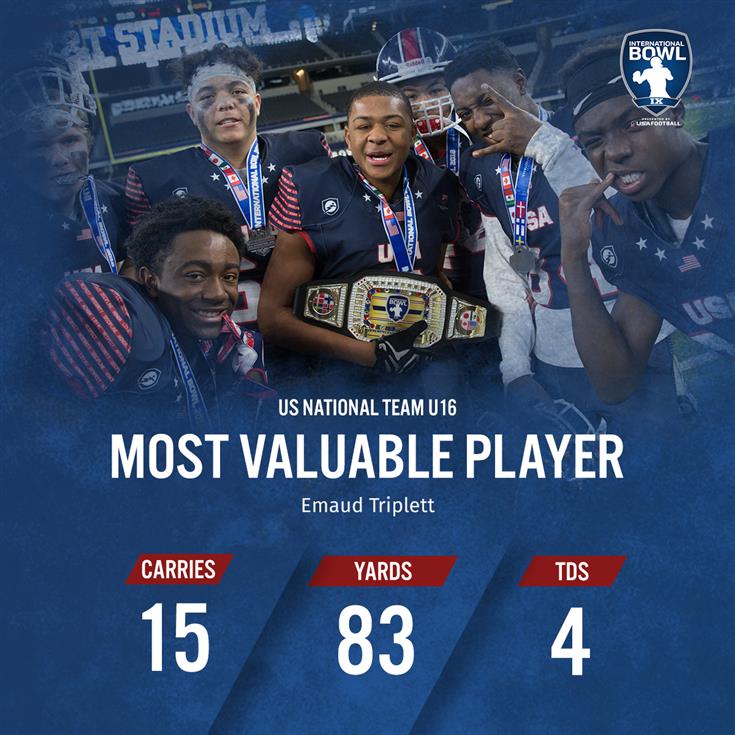 RELATED CONTENT: U.S. National, Select teams give back during Community Blitz in Dallas

With a 67-yard TD strike from Michael Priami (Bartlett, Illinois) to Devin Smith Jr. (Smyrna, Delaware) and a 63-yard scoring run by McAllister, the U.S. outgained Chihuahua 335 yards to 31 in the first half, as McAllister and Priami went a combined 9-of-16 for 140 yards and three TDs through the air.

It's the Luke McAllister Show!

Luke calls his own number and scrambles in from 63-yards out. #EarnYourStars #IB2018 @PRHS_Football pic.twitter.com/rUbtsD3hh5

The highlight reel continued in the second half, including a 63-yard TD throw from Priami to Isaiah Cohran (Memphis, Tennessee), and a 25-yarder from McAllister to Champion Johnson (San Diego, California). 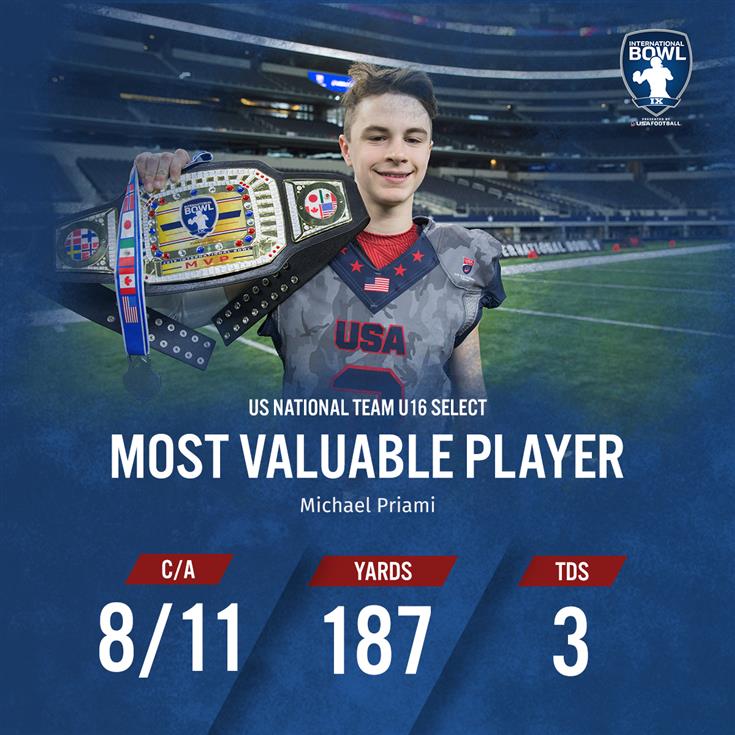