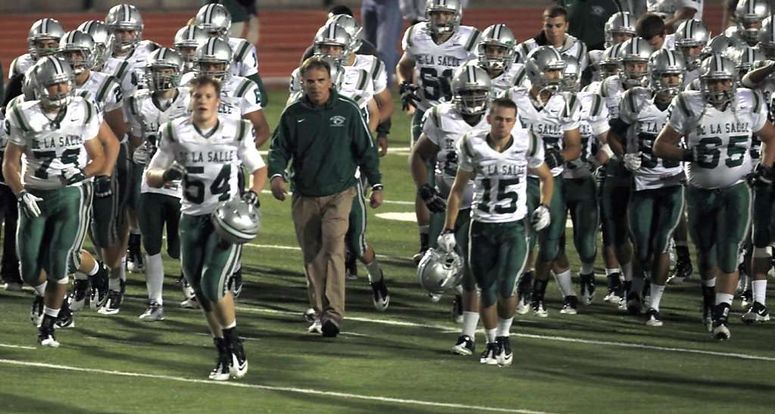 It takes an unbelievable amount of discipline and focus to be as dominant as the team has been since former head coach Bob Ladouceur took the program over in 1979. He’s since handed the program off to his protege, Justin Alumbaugh, who has kept the tradition of winning — going 49-6 with a section championship win during his time as head coach.

RELATED CONTENT: What you can learn from Los Angeles Rams coach Sean McVay's third-down play calling that could help your QB

Ladouceur once said, “This program was founded on certain ideals — perfection, commitment, compassion, brotherhood, faith.” Those ideals continue to be the pillars of the program today. Things have changed and the program has adapted with modern tweaks, but some things will never change. For example, the team still runs the same split back option offense that has given defenses fits for decades now. There are some modern tweaks in their offense, but the base concepts (veer, midline, speed option) remain the same.

You’ll see all sorts of creative triple option plays out of the spread nowadays, but the “original” triple option is the veer play. The line down blocks and leaves a defensive end or contain player unblocked for the quarterback to read. The quarterback can either hand off to the running back running toward the B or C gap or keep the ball, depending on what the end does. If the quarterback keeps the ball, he could pitch the ball to another back.

The timing of the play is essential. It is something that has to be repped over and over again. It has to be as quick as possible. De La Salle linemen aren’t asked to sustain long developing horizontal blocks. They are flying off the ball as quickly as they can and trying to create movement and get to the second level quickly.

The dive option has to hit the hole quickly and then veer out to hug the line’s down blocks, hence the name “veer.” It’s not like the zone read, in which the quarterback could take a little longer to read. It happens quickly. If the read man doesn’t commit to stopping the dive, it should fly right by him.

Quarterbacks are typically told to read the shoulders of the read man. If his shoulders are facing upfield, he should hand the ball off because he shouldn’t be able to tackle the read man from that position.

In the clip, the quarterback makes an excellent read. Even though the end is tight to the hole, his shoulders are upfield and the back flies right past him.

On this play, the read man’s shoulders faced the back and the quarterback made the correct decision to keep the ball and was rewarded with a touchdown.

The final phase of the play is the pitch. The pitch read is usually an overhang defender. Most of the time, if the quarterback keeps the ball, he’s able to get good yardage and gets downfield so quickly that the pitch rarely happens.

Teams defend the option by playing assignment football, meaning they assign a defender or defenders to stop certain phases of the option. For example, they could have an end cancel the dive, a linebacker cancel the dive, and have a cornerback rally to the pitch.

This is a sound strategy but it could leave them susceptible to play action because of how focused they are on their option responsibilities. Also, the option hits so quickly they have to react quickly.

The veer slant is a simple but effective complement to the triple option.

The quarterback started by moving laterally down the line to give the look of the veer play that caused the defense to collapse to their option responsibilities. This left the cornerback without any inside help. The slant was open and the quarterback completed it by making the throw on the run.

The midline option is similar to veer. Instead of the quarterback reading the end, he’ll read the first defensive lineman past the center, which is usually a defensive tackle in a three-technique. The dive hits the A-gap and the play obviously hits much quicker.

It’s more of a double option than a triple option. I don’t believe I have ever seen a team pitch the ball on a midline option.

Another key element is the lead block from the tight end, who folds inside. Georgia Tech, who runs this play from flex, would have either its A-back or B-back fold to make this block. The block is for the quarterback if he keeps the ball. The quarterback has to get vertical as quickly as he can and “replace” the read man as efficiently as possible.

Here, De La Salle ran the play out of a split back tight left twins right formation. They ran it toward the weak side, in part because it’s easier to run it toward the one-technique and because they have a numbers advantage with the “load” block from the playside back.

This dive play is a bit strange to me, because De La Salle hasn’t shown a speed option in which the quarterback reverse-pivots into it. So it seems like an obvious tell that the play isn’t an actual speed option. However, the play hits so quickly that even a little hesitation by an outside linebacker reacting to the speed option look will take him out of the play.

It’s a pretty sight watching the Spartans run the counter trey. The down blocks on the play side are devastating, and the pulling guard and tackle usually leave disaster in their wake.

The play side back went backside to fill-in for the tackle that pulled to lead block for the ball carrier. The back away from the playside tackles a couple of steps back and angles himself to align with the hole. The pulling guard kicked the contain player out and the back correctly cut the play up to get north and south.

Most of the time, De La Salle would actually run their counter trey wide. I believe the reason for this is that teams would have their ends play extremely tight on down blocks to cancel the dive on triple options. So the best option is “log” the end with the guard, meaning he’ll work to the ends outside shoulder and pin him inside or just get enough of him so the back could take the play outside.

Here, they ran their counter trey from the shotgun formation and made it more dangerous by turning it into a triple option. Because there is no one blocking the backside end, the quarterback reads him like he would on a zone read play. If the end crashes, the quarterback could keep and read an overhang for the pitch.

Because the end stayed outside, the quarterback handed the ball off. The playside end saw the down blocks and crashed the play so hard, the guard didn’t have time to “log” him. Instead, he just pancaked him, which allowed the tackle and running back to get outside.

The advantages of knowing what you want to run and sticking with it is that you’ll see how defenses will want to defend your system, and there’s only so many ways they could. Once you see all the adjustments, you’ll add your own answers to those adjustments throughout the years. That’s certainly the case with De La Salle. It’s hard to surprise them with something they haven’t seen before and they’ve proven that for decades now.