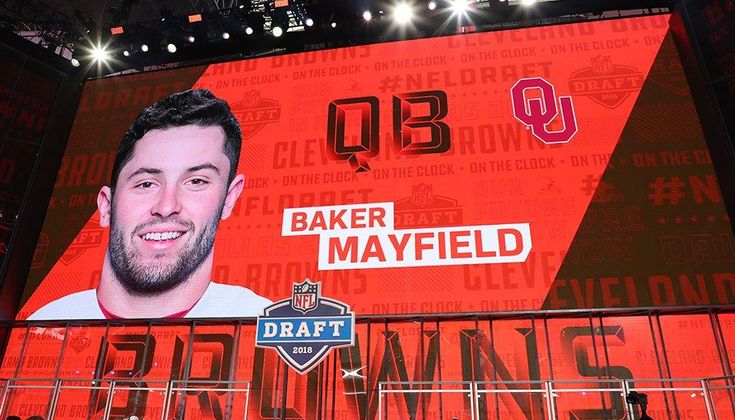 The 2018 NFL Draft kicked off Thursday evening at AT&T Stadium in Arlington, Texas, home of the Dallas Cowboys. As usual, the first round was chock full of athletes who played multiple sports in high school or throughout most of their pre-college years.

RELATED CONTENT: Athletic directors and coaches should work together to allow athletes to play multiple sports

Eight of the first 10 opening round selections played at least one sport besides football in high school, including Oklahoma quarterback and Heisman Trophy winner Baker Mayfield, the No. 1 overall pick by the Cleveland Browns, who also played baseball at Lake Travis High School in Austin, Texas.

Ninety-one percent of athletes selected in the first round participated in more than one sport during high school. Track and field (22) and basketball (17) were the most popular secondary sports.

So important for parents of young athletes to remember! Regardless if a child can develop into a major college, professional or Olympic-level athlete, it's important for them to have fun and play everything! https://t.co/ehyrRbDt28

"Young people involved in more than one sport have greater opportunities to forge new friendships or deepen those they already have with teammates who share their multi-sport experiences," Hallenbeck and Gardner said. "They also benefit from having additional positive role models in the form of coaches and volunteers."

RELATED CONTENT: A look at the 29 U.S. National Team alums who've been selected in the NFL Draft 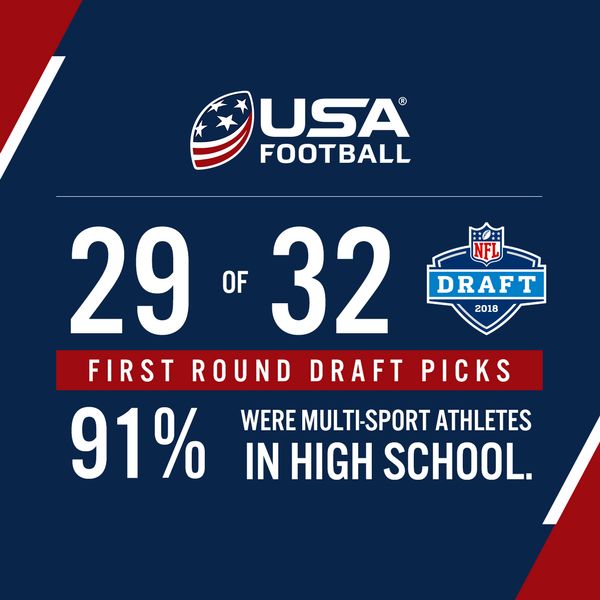 Here are this year's first-round draft picks, with multi-sport backgrounds in parenthesis:

The 3️⃣rd pick by the @nyjets in the #NFLDraft was @USC_Athletics product Sam Darnold. #JetUp

Did you know he was a multi-sport athlete in high school?

The top-rated pass rusher is off the board to the to the @Broncos!!

Want to find out more about your newest addition #Broncos fans? Listen to what his high school coach from @HgroveFootball has to say. #NFLDraft | #BroncosDraft

Did you know he was a multi-sport athlete in high school?

The newest Chicago Bear is @RoquanSmith1!!!

Rosen will wear red
He used to rock blue
Those that wanted us to take @Josh3Rosen
Your dreams have come true. pic.twitter.com/5xjcC9wUom

With the No. 13 pick in the 2018 #NFLDraft, the Washington #Redskins select Da'Ron Payne, DL, Alabama. #HTTR pic.twitter.com/Jd4lwUaClj

With the 14th pick in the #NFLDraft, the #Saints select DE Marcus Davenport! #SaintsDraft pic.twitter.com/mhc7VLHIZZ

With the 15th pick in the 2018 #NFLDraft, we have selected T Kolton Miller from @UCLAFootball. #RaiderNation pic.twitter.com/q1sfOqWrNn

Welcome to the #Packers, @JaireAlexander!

With the 20th pick in the 2018 #NFLDraft, the #Lions select C Frank Ragnow! #OnePride pic.twitter.com/TrKTBX2xAO

With the 21st pick in the 2018 NFL Draft, the Cincinnati #Bengals select Billy Price, center from Ohio State.

.@FootballUGA lineman @iwynn77 becomes the 1st National Team alum off the board in the #NFLDraft!! #EarnYourStars

Can't wait to see his next step with the @Patriots.

Another multi-sport athlete goes in the first round as @haydenrhurst goes to the @Ravens with the 2️⃣5️⃣th pick of the #NFLDraft! https://t.co/IOOvsLCecj

With the 28th pick in the 2018 #NFLDraft, we have selected Terrell Edmunds. pic.twitter.com/N50fDmbdCl

The @Jaguars just got a BEAST in the trenches.
@tavenbryan93 ➡️ #GatorMade

There are multi-sport athletes all throughout the top ten of this years #NFLDraft.