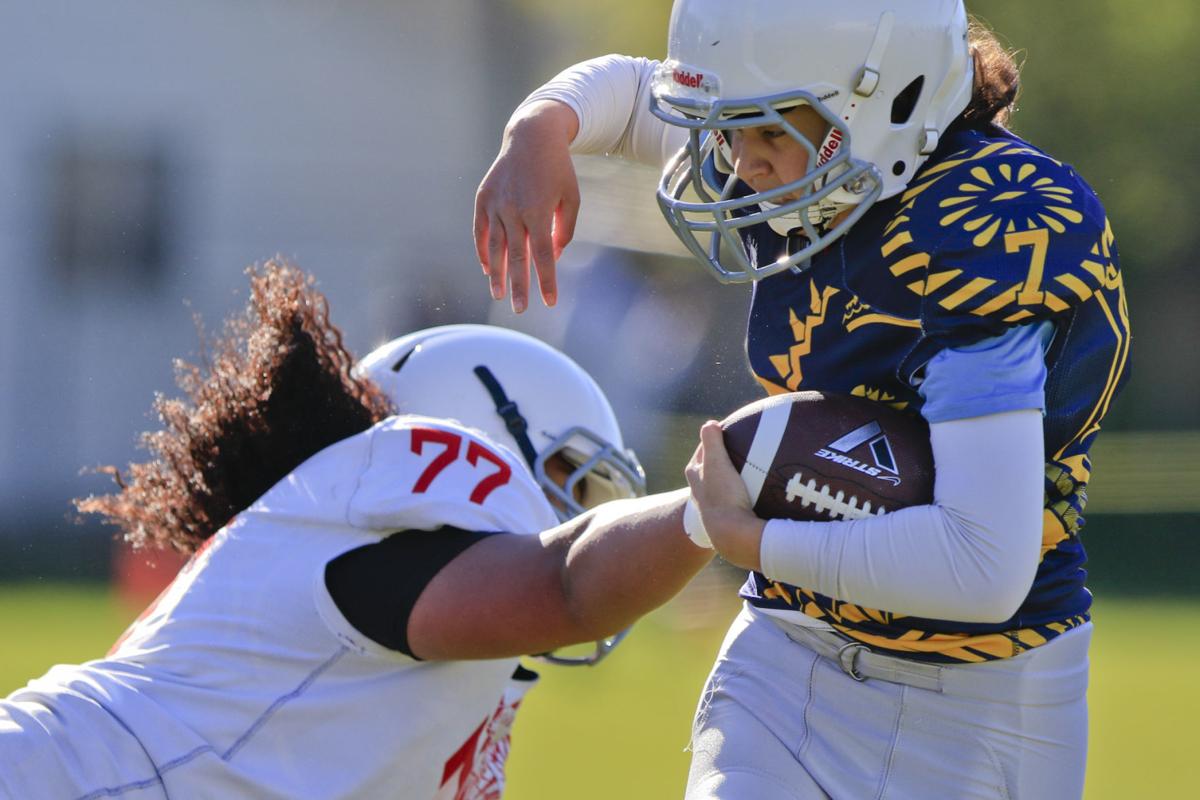 A running back in the Utah Girls Tackle Football League sweeps by a defender. (Photo via heraldextra.com)

For more than a century, football has been played and coached mostly by men. In recent years, however, more women in football have emerged, and it appears that'll continue.

“Football is not only for boys. Girls can play, too. You can play any sport you want," said Morgan Slevage, one of two girls who played in the Lincoln Youth Football League last year among 938 boys.

The league, located in Lincoln, Nebraska, started 70 years ago as a co-ed program. Its current organizers and coaches agree with Slevage, and hope to see an increase in female participation.

RELATED CONTENT: How one couple is using football to give kids in a Louisville neighborhood a chance at a better life

Makenzy Bellamy, the other girl in the league, has played for two years. The common stereotype against females who play football is they don’t have the physical ability. Bellamy admits it can be a challenge, but not enough to set her back.

“Tackling isn't always the easiest. You have to get low, and it was hard to learn that at first, but once you get used to it, it's really good,” said Bellamy.

Although youth football leagues are for boys and girls, the number of females players has remained low. Pop Warner, the largest youth football organization in the world, estimates girls make up 1 percent of its 250,000 registered players.

“Seven out of 10 girls feel there are not enough visible female role models in sports,” said Jen Welter, the NFL’s first female coach. “To me, that was a personal challenge. If I don't become one of those women they can see, interact with and know that it is possible, then God chose the wrong person to be the first female coach in the NFL.”

Welter travels the country to host the Grrridiron Girls Camp tour. Both girls and boys age 6-18 are welcome at the camps to run drills with Welter and special NFL alumni guests.

"Football to girls is foreign: ‘No, I can’t do that. I'm not going to do that.’ If they start at this, what else can they start at? It’s just a mantra of, 'Girl power. I'm invincible. I'm fearless,’” Smith said.

The Manning family recently involved girls in football through their clinic, the Manning Passing Academy, now open to females in grades 8-12. Organizer Jeff Hawkins and the Mannings were inspired by an advocate of girls football in Utah, a state that's seen significant growth in high school-level female football players.

Since 2015, the Utah Girls Tackle Football League has grown from 50 to 300 athletes. League president Crystal Sacco believes the growth has encouraged new girls to try it, and that it could grow enough to become part of high school sports.

“Once we break that barrier, it is going to happen all over the United States,” Sacco said.

Information from 10 11 Now, FiOS1, the Chicago Sun-Times, Daily Herald and WWL.com was used as part of this article.