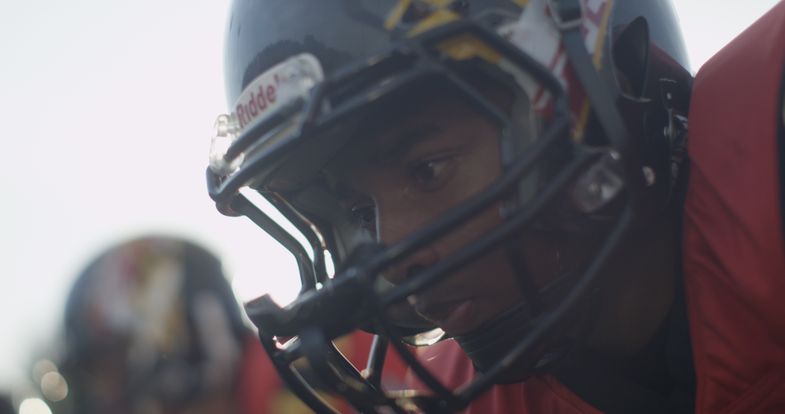 The snatch-and-trap technique is used by offensive linemen in pass protection as a counter to pass rushers with uneven weight distribution. Defenders who have too much weight in front of their body don’t have a proper base of support to stabilize their frame, which causes them to be susceptible to the snatch-and-trap.

This usually occurs during a long-arm or bull-rush, when rushers can overextend in an attempt to generate power without bringing their feet, negating their center of gravity and balance in the process.

Too much of their weight becomes reliant on their arms rather than their base (feet), effectively leaning into contact rather than driving through the ground to generate force. This leaves rushers with very little margin for error or ability to recover if their point of contact is taken away.

The snatch and trap is predicated on blockers gauging this vulnerability in their opponent, aiming to “snatch” away their source of balance with a downward two- or one-handed swipe or chop at the wrist, forearm or elbow of the rusher. This consequently “traps” and breaks the rusher’s contact point, negating their primary source of balance, resulting in a sudden, abrupt collapse to the ground.

RELATED CONTENT: The art of the strike: 3 techniques offensive linemen can use to fend off pass rushers

This technique is used with success from all positions on the offensive line, out of all pass set variations. This first example comes from former Ohio State Buckeye and current Minnesota Vikings center Pat Elflein demonstrating a keen sense of timing with a precise downward strike at the defensive tackle’s elbow, sending him to the ground like a sack of potatoes.

The rusher collided with his teammate in the same A-gap, but his weight drifted too far in front of his body, which was the underlying reason for being exposed to the snatch-and-trap.

On the defender’s approach as a pass rusher, many players tend to lead to initiate contact with a long-arm, particularly off the edge. “One arm is longer than two,” is a coaching point for many pass rushers, with the idea of establishing contact using a single arm, reducing the surface area for offensive linemen to strike, acting as a pivot for rushers to quickly turn the corner.

The primary counter to the long-arm move is the snatch-and-trap, which is ideally deployed prior to contact being established. Once a rusher throws a single arm into the frame of a blocker, his center of gravity drifts forward, leaving his arm as the sole means of remaining upright.

Timing is a critical aspect for blockers to succeed with the snatch-and-trap technique. Oakland Raiders left tackle Donald Penn showcases how it should look here against Buffalo Bills pass-rusher Jerry Hughes:

Another scenario where the snatch-and-trap is applicable at at time that isn’t before initial contact occurs after a jump set is executed by the offensive linemen. After initially latching onto the defender, the rusher can counter with a long-arm in order to clear his chest to provide room to execute a pass-rush move.

Watch how former Notre Dame and current Indianapolis Colts left guard Quenton Nelson demonstrates how to properly employ the snatch-and-trap to circumvent the long-arm during this transition period:

This next clip shows Los Angeles Rams right tackle Rob Havenstein using a jump set to get on top of an edge-rusher, then transitioning into a two-handed snatch-and-trap once the defender counters with a long-arm move. Timing, placement, and dexterity are all on display from the former Wisconsin Badger here:

Perhaps the most savvy practitioner of this technique resides in Dallas, with Cowboys left tackle Tyron Smith, who utilizes elite timing, placement and variance. Few players display comparable execution of the snatch-and-trap.

This next clip comes against Baltimore Ravens pass rusher Terrell Suggs, with Smith using a one-handed snatch-and-trap to break contact at the wrist of Suggs on an attempted bull-rush. Notice how quickly the rusher falls to the ground once Smith traps his wrist, and how Smith subtly backs away to expedite his fall:

When offensive linemen need a counter to pass rushers who are heavily reliant on the bull-rush or long-arm techniques, the snatch-and-trap is the ideal way to outmaneuver their opponent. The keys reside in having quick mental processing skills to key and diagnose when these moves are coming, with the timing and hand placement to break the contact point of the defender. In the pass-protection battle, blockers can add this technique to their repertoire to better equip themselves against pass rushers with the aforementioned tendencies.