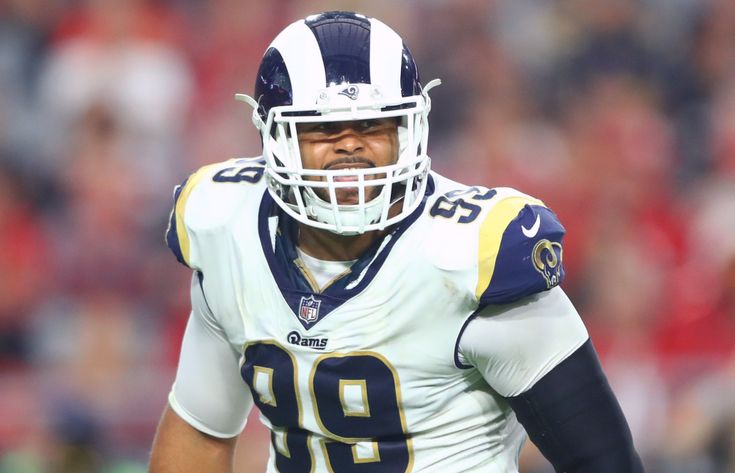 Los Angeles Rams interior lineman Aaron Donald is one of the NFL's best at the forklift technique. (Photo via theramswire.usatoday.com)

Pass-rushing defensive linemen can incorporate the forklift technique as a means to disengage from blockers en route to the quarterback, especially when bull-rushing. If offensive linemen establish contact inside the frame of the rusher, an option is to break contact at the wrist of the blocker with either an upward, downward, or lateral forklift technique.

The key for success with the forklift is predicated on the rusher bringing their hand inside to their armpit in order to locate the blocker’s hand they want to move.

The forklift can be utilized in a reactionary manner based on an initial move that doesn’t work, or as a counter, but also as a premeditated primary move to win a rep.

Players with a wide range of body types can use the forklift, visible in these following clips with examples from a player standing 6 feet tall (Aaron Donald) to 6-feet-8-inches (Calais Campbell).

The shorter players with better natural leverage are in a more direct position to execute this technique upward since they are naturally lower, whereas taller players tend to have an easier time using the forklift in a downward motion since they are naturally higher. These aren’t mutually exclusive, so each body type can interchange how they employ the technique, they just may need to be more crafty in their approach so they can achieve success.

First, we go to Donald, who provides an outstanding example of setting up the forklift from a 4i-alignment shaded inside of the left tackle. This pre-snap alignment paired with Donald’s upfield quickness causes the blocker to open his hips prematurely in an attempt to establish contact, creating a soft inside shoulder.

Simultaneously, the blocker throws an inside strike in an attempt to gain leverage, only Donald is one step ahead, ready with his inside hand to work upward and unlock contact using the forklift.

This is a tremendous job of having a pass-rush plan and setting up the forklift technique:

Next, we’ll go to Dallas Cowboys defensive end Demarcus Lawrence using the forklift on a bull-rush, only with a long-arm technique using his opposite arm. Lawrence not only breaks contact with the forklift using both an upward and lateral motion, but prevents the blocker from ever fully initiating contact himself.

This is a unique, yet practical example of how effective the forklift technique can be in preventing an offensive lineman from hunkering down, creating leverage, and stopping a bull rush:

The bull rush is typically the most common use of the forklift. In the clip below, Jacksonville Jaguars defensive lineman Calais Campbell demonstrates another keen use of the technique. Pay close attention to how he brings his outside hand into his armpit once the blocker lands his outside strike, finding his wrist, and working upward to disengage.

The offensive tackle was counting on his outside strike to establish leverage so he could sit on the bull rush, but instead he is unable to sink his hips and maintain his footing, opening the door for Campbell to pursue the quarterback.

Despite being 6-feet-8-inches tall with an easier pathway to a downward forklift, Campbell shows that players can accomplish the inverse with proper hand technique and shoulder mobility, regardless of size:

As mentioned earlier, breaking contact in a variety of directions becomes applicable depending on the angle of pursuit the rusher wants to take.

Arizona Cardinals defensive end Chandler Jones displays an example of initially working his hand to his armpit, but instead of thrusting upward to break contact, rotates his own wrist around the blocker’s wrist, effectively “trapping” it, before driving downward in order to turn a tight corner:

To wrap up, we’ll go back to Aaron Donald. He’s perhaps the most adept practitioner of the forklift technique, evident by this next clip where he performs a double forklift, using both hands simultaneously to break off a two-handed strike from the right guard.

As with most pass-rush moves, the forklift has several variations that players can make their own. Additionally, the forklift doesn’t have to be a standalone pass-rush move. They can use it to set up an ensuing move by breaking contact, forcing the blocker to reinitiate contact to regain leverage, creating a brief period of vulnerability that savvy rushers can utilize.

The rusher must be able to string together multiple moves in the same rep to accomplish this feat (which is no easy task), but when carried out is one of the more skillful maneuvers on a football field.

Donald shows this with rare fluidity in this last clip:

The forklift technique is a great way for pass-rushers from any defensive line position to break contact on their bull-rush, set up a counter move, or use as a counter move itself.

Adding to the toolbox of pass-rushers in order to diversify their pass-rush plan is an important method to help them take their game to the next level, and the forklift technique can be a valuable resource to do exactly that.