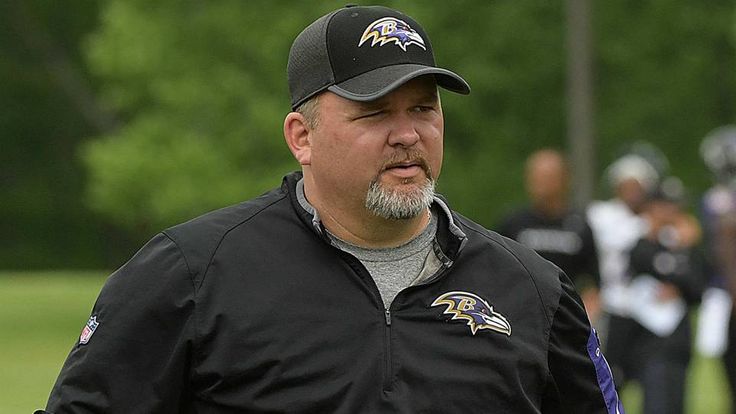 Greg Roman has long been considered one of the NFL’s top offensive minds when it comes to the running game, and 2017 was another example of his ability to bolster production on the ground.

Roman was hired before the 2017 season as an assistant head coach/tight ends coach, with an unofficial title of run game coordinator.

Roman was brought in to rehabilitate and revitalize the ground game with a focus on a multiple scheme tailored to the opponent each week, rooted in the fundamentals, predicated on achieving superior angles, numbers, and getting the offensive line unit to play with the right attitude.

Head coach John Harbaugh explained the shift in philosophy midway through the 2017 season after production spiked:

Roman broke it down further:

"I think it's going to come down to the details, and the fundamentals of things,” he said. “That's always been the case. Running the football, though, starts with having the right attitude, and I think our guys have that attitude."

The Ravens went on to finish the 2017 season ranked seventh in rush attempts (460), 11th in rushing yards per game (116), and seventh in overall rushing offense according to Football Outsiders.

Their scheme featured a bevy of different concepts that were established each week based on the opponent’s weakness as a defense. The primary concepts that served as the bread and butter of the scheme however, were power, outside zone, pin-pull, and counter/trap/wham variations.

These core plays allowed the Ravens to take advantage of their athleticism upfront, with heavy use of tight ends and fullbacks as additional blockers.

Roman has long implemented counter and trap concepts into his scheme dating back to his days with the San Francisco 49ers under former head coach Jim Harbaugh, which help blockers gain a numbers advantage through the art of misdirection.

Baltimore implemented heavy use of tight ends and fullbacks to help them execute these concepts, providing superior angles on defenders, with numbers advantages to either side of the formation.

This also helped circumvent both starting guards (Marshal Yanda & Alex Lewis) going down with injuries early in the season, and allowed the Ravens’ offensive line to get out in space and use deception to gain yardage on the ground.

The title provides the explanation of the concept; the Y tight end inserts into the hole, which in this case is the B-gap between the left tackle hinge block and the left guard down block:

Baltimore ran a host of different variations of the counter trey, out of multiple formations, personnel groupings, and plenty of motions pre-snap to confuse defenses.

Here, the Ravens run to the boundary out of a condensed 11 personnel formation, motioning a tight end to the frontside to help block down and build a wall, with a backside guard and tackle serving as the pullers to kick out and lead:

Another version of the Ravens counter concept, this time with a tight end serving as the lead from the backside as opposed to the tackle, with the backside guard again kicking out the frontside contain defender:

Trap variations were perhaps the most unique aspect of the Ravens’ running game in 2017, with an array of different pre-snap looks Roman used to dress up a relatively simple concept.

Here, we see a basic trap play, with the 3-technique defensive tackle being the target of the trap. The offense aligns its tight end in the backfield directly behind the left tackle to pick up the end man on the line of scrimmage:

The wham block differs from a trap block in that the wham is carried out by a skill player such as a tight end or H-back from behind the line of scrimmage, whereas the trap is carried out by an offensive linemen. Both blocks have aiming points to the sides of an unsuspecting defender.

An added wrinkle that Baltimore used extensively in 2017 was including a wham block by a tight end on the opposite side of the trap block, taking care of both defensive tackles, allowing more offensive linemen to climb to the second level.

This is a great illustration of what Harbaugh referenced earlier when he said that they wanted to “create angles” on the defense:

This is a concept that is rarely seen in the NFL, but certainly creates superior angles for the offense, and plenty of confusion for the defense:

Baltimore tailored its game plan each week to its opponent, and made key in-game adjustments depending on what the defense presented to them. This next clip showcases the Ravens’ ability to adjust on the fly.

In an attempt to counter the Ravens’ heavy use of power prior to this play, the Pittsburgh Steelers overloaded one side with five defenders, leaving just three on the weak side. Baltimore quickly motioned over one of its tight ends out of 12 personnel, and executed a quick pitch to the runner while still blocking power to the frontside.

This provided the offense with the numbers advantage Harbaugh referenced regarding the goal of their rushing attack, while using deception to counter the defense:

These are just some of the concepts Roman brought with him to Baltimore in 2017, dramatically boosting the rushing production of the offense despite dealing with a rash of injuries upfront throughout the season. Through creating preferred angles and numbers, with extensive divergences in alignments, Roman was able to maximize his personnel and deliver much-needed production to the Ravens’ rushing attack.